Since Part 1 laid a suitable foundation, let?s take a closer look at a few of the more notable new features of the JESD204C standard.Del Jones, Analog Devices

For the 64b/66b link layer, the 66-bit block of data is two sync header bits followed by eight octets of sample data and is partially based on the block format defined in IEEE 802.3, clause 49. Unlike the IEEE standard, there is no encoding—the payload data are simply the converter sample data that have been packed into frames of data by the transport layer. Since there is no encoding to ensure a certain number of data transitions occur to provide dc balance, the sample data must be scrambled. These scrambled octets of framed data are placed directly into the link layer with the two sync header bits attached.

To remain consistent with the approach used in JESD204B, the octets within the multiblock are shifted into the scrambler/descrambler in the order of MSB to LSB.

The 64b/80b block format is illustrated in Figure 2. In addition to the eight octets of sample data and the two sync header bits, there are two fill bits placed in between each of the octets. The values of the fill bits are determined by a 17-bit PRBS sequence to reduce spurs and ensure an appropriate number of data transitions to maintain dc balance. The unscrambled fill bits are inserted into the block after the sample data has been scrambled.

The 64b/80b option was provided to retain the same clock ratios as 8b/10b, which helps simplify the phase-locked loop (PLL) design while also minimizing spurs. This scheme would be preferred over 8b/10b in applications that want to use forward error correction or take advantage of the other functions provided by the sync word, which will be discussed shortly.

A multiblock is either 2112 (32×66) or 2560 (32×80) bits depending on which 64-bit encoding scheme is used. For most implementations and configurations, an extended multiblock will be just one multiblock. The E parameter is introduced in JESD204C and determines the number of multiblocks in the extended multiblock. The default value for E is 1. As implied above, E > 1 is required for configurations where the number of octets in the frame, F, is not a power of two. The equation for E is: E = LCM(F, 256)/256. These configurations are typically preferred when transmitting 12-bit samples and N’ is set to 12 to maximize bandwidth efficiency in the link. This requirement ensures that the EMB boundary coincides with a frame boundary.

Figure 4 and Figure 5 illustrate an example of a JESD204C configuration where E > 1. The JESD204C configuration shown is for the case where LMFS = 2.8.6.1, N’ = 12, and E = 3. Figure 4 shows the transport layer mapping. In this configuration, there are four 12-bit samples per lane, which translates to six octets. Since each block of a multiblock needs eight octets, the block is filled in with two octets (1.33 samples) from the subsequent frame. 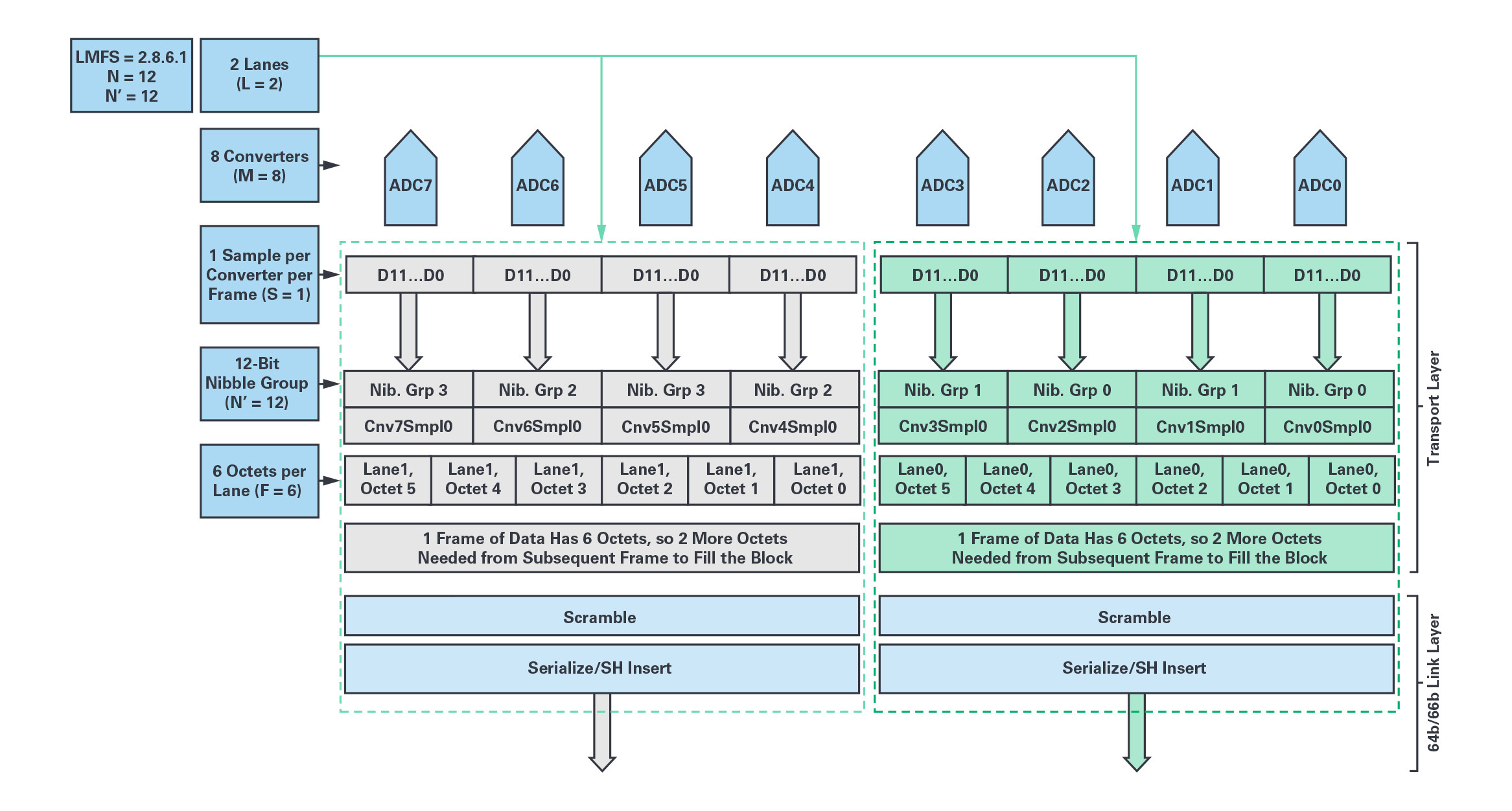 Figure 5 shows how the blocks and multiblocks are formed using the frames of data from the transport layer. As illustrated, you can see that frame boundaries align with block boundaries on every third block. Since multiblocks consist of 32 blocks, frame alignment to a multiblock is not achieved until after the third multiblock. Therefore, E = 3. 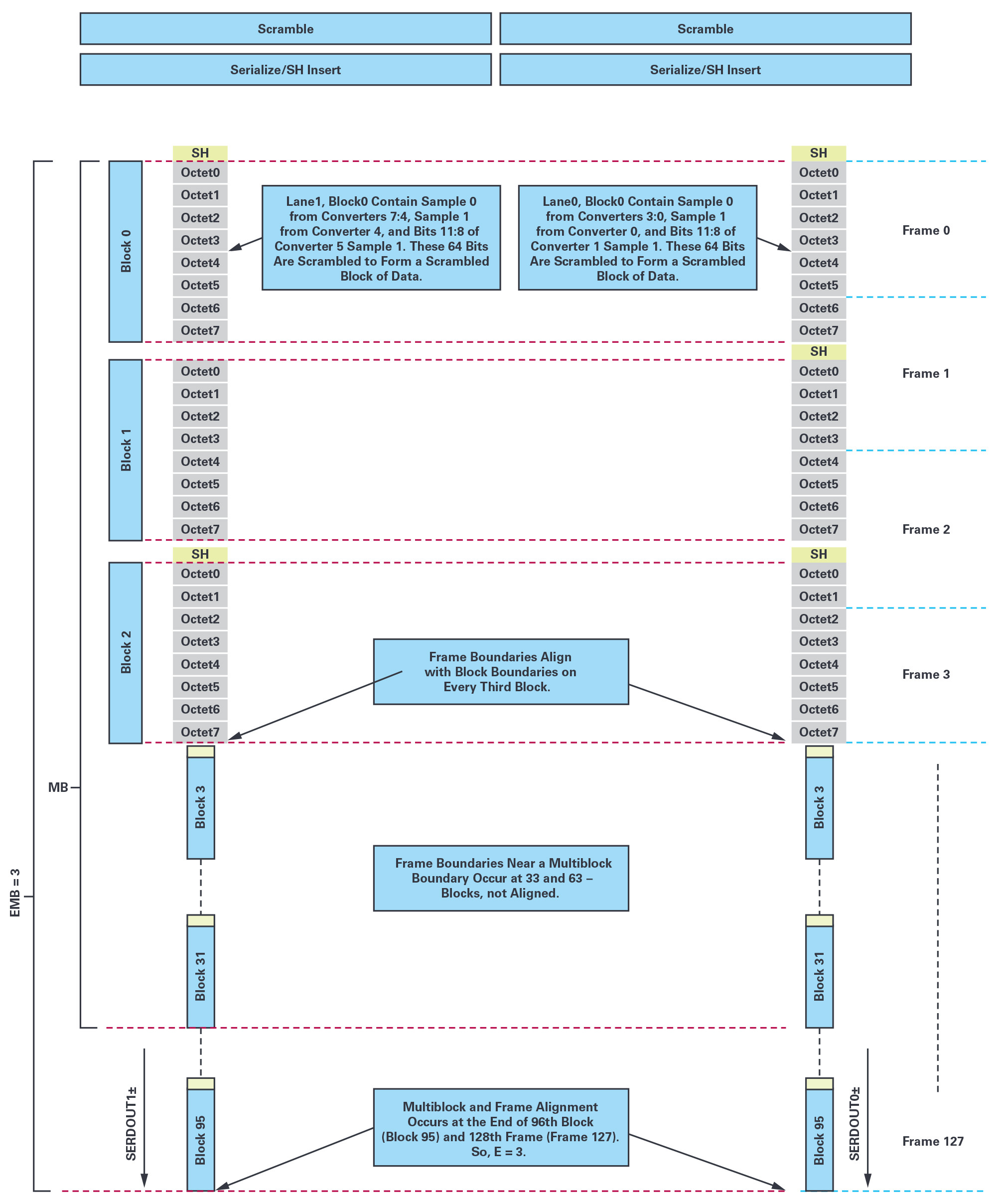 LEMC is the extended multiblock counter and is roughly equivalent to the LMFC in the 8b/10b link layer. SYSREF aligns all LEMCs in a system and the LEMC boundaries are used to determine synchronization and lane alignment.

The 32-bit sync word is made from each of the sample headers from the 32 blocks within the multiblock where bit 0 is transmitted first. The sync word is used to provide lane synchronization and enable deterministic latency. In addition, it can optionally provide for CRC error checking, forward error correction, or provide a command channel for the transmitter to communicate to the receiver.

There are three different formatting options for the 32-bit sync word. In each case, the end-of-multiblock sequence is required since it is used to acquire multiblock synchronization and lane alignment. Table 2 and Table 3 show the different bit fields available in the two most common use cases. 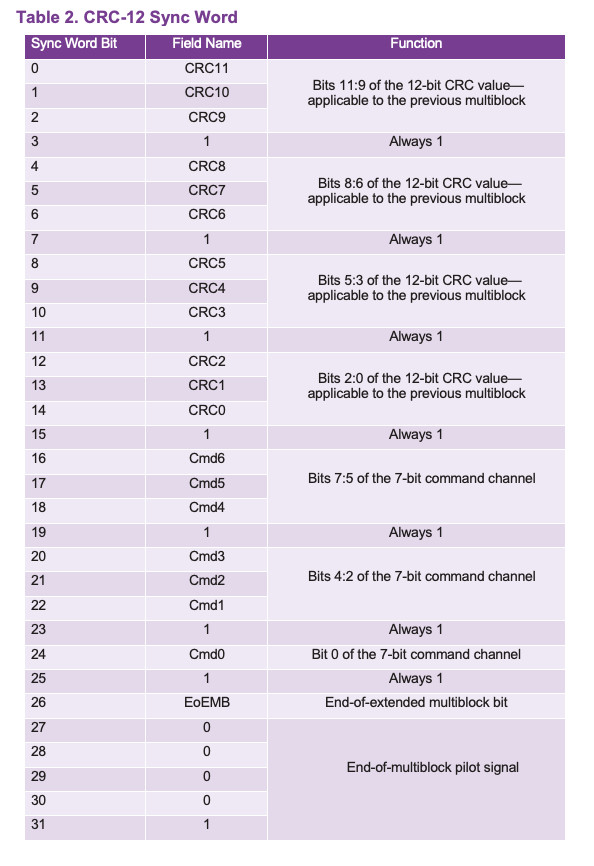 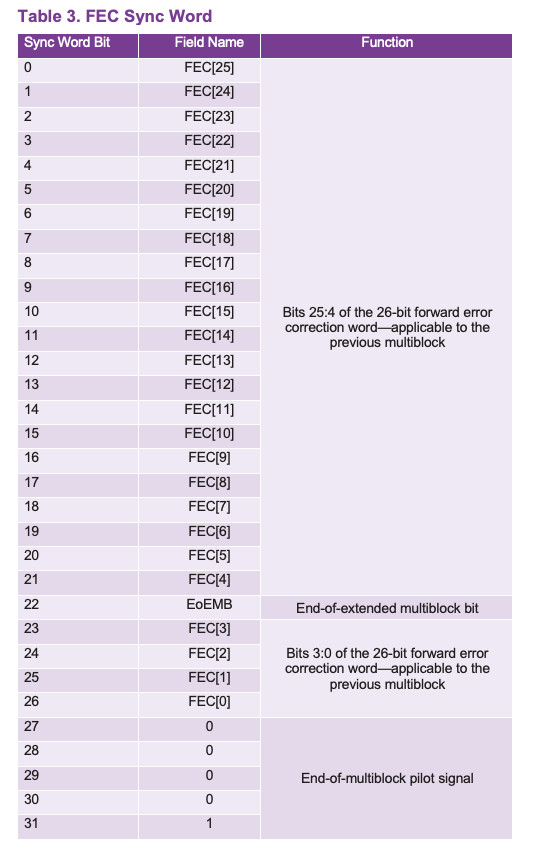 Once sync header alignment is achieved, the receiver looks for the end-of-extended-multiblock (EoEMB) sequence (100001) in the transition bits. The structure of the sync word ensures that this sequence can only happen at the appropriate time. Once an EoEMB is identified, the state machine examines every 32nd sync word to ensure the end-of-multiblock pilot signal (00001) is present. If E = 1, the EoEMB bit will also be present with the pilot signal. If E > 1, then every E × 32 transition bits, the pilot signal will have included the EoEMB bit. Once four consecutive valid sequences are detected, then end-of-extended-multiblock lock (EMB_LOCK) is achieved. Monitoring of every E × 32 transition bit continues and EMB_LOCK is lost if a valid sequence is not detected and the alignment process is reset.

Lane alignment when using the 64b/66b link layer is very similar to when using the 8b/10b link layer in that an elastic buffer is employed in the JESD204C receiver on each lane to store incoming data. This is called extended multiblock alignment and the buffers begin storing data at the EoEMB boundary (rather than the /K/ to /R/ boundary during ILAS when using the 8b/10b link layer). Figure 6 illustrates how lane alignment is achieved. Each lane’s receive buffer starts buffering data once the last bit of the EoEMB is received except for the last arriving lane. When the last arriving lane’s EoEMB is received, it triggers the release of all the lane’s receive buffers so that all lanes are now aligned.

JESD204C sync word options give the user the ability to either monitor or correct errors that may occur in the JESD204 data transmission. The trade-off associated with error correction is additional latency in the system. For most applications, error monitoring using the CRC-12 sync word is suitable since it provides for a bit-error rate (BER) of greater than 1 × 10–15.

For error-sensitive applications that are not sensitive to added latency (like test and measurement equipment), using FEC can result in a BER of better than 10 × 10–24. The FEC circuit in the JESD204C transmitter computes the FEC parity bits of the scrambled data bits in a multiblock and encodes these parity bits on the sync header stream of the next multiblock. The receiver calculates the syndrome of the received bits, which is the difference between the locally generated and the received parity. If the syndrome is zero, the received data bits are assumed to be correct. If the syndrome is non-zero, it can be used to determine the most likely error.

The FEC parity bits are calculated in a similar way to CRC. The FEC encoder takes in the 2048 scrambled data bits of the multiblock and adds 26 parity bits to construct a shortened binary cyclic code. The generator polynomial for this code is:

This polynomial can correct up to a 9-bit burst error per multiblock.

To meet the faster data processing demands for data-intensive applications over the course of the next several years, JESD204C defines the multigigabit interface as a required communications channel between data converters and logic devices. The up-to 32 GSPS lane rates and 64b/66b encoding enables ultrahigh bandwidth applications with minimal overhead to improve system efficiency. 5G communications, radar, and electronic warfare applications all stand to benefit from these and other improvements in the standard. With the addition of error correction, cutting-edge instrumentation and other applications can count on operating without error for many years.

Del Jones is an applications engineer for the High Speed Converters Team in Greensboro, North Carolina. He has worked for ADI since 2000, supporting ADCs, DACs, and serial interfaces. Prior to ADI, he worked as a board and FPGA design engineer in the telecommunications industry. Del earned his bachelor’s degree in electrical engineering from the University of Texas at Dallas.

I am a senior staff member of Analog Devices High-speed Mixed Signal (HSX) product line's Application Engineering department. I provide customer support for High-speed DACs and ADC's with an expertise in multi-gigabit serial interfaces. I also provide department leadership in the area of "eco-system" development. That is, providing tools, documentation, and services to enhance the end-user experience.