The Top Use Cases for the GAP8 IoT Application Processor

GreenWaves? pioneering GAP8 IoT application processor is opening up new possibilities for the next generation of connected devices.

Thanks to AI technology, connected devices are becoming smarter than ever. The latest AI powered devices can sense what’s happening in the environment around them, interpret that information and then respond to help make our lives easier. GreenWaves’ pioneering GAP8 IoT application processor is opening up new possibilities for the next generation of connected devices. GAP8 enables the cost-effective development, deployment and autonomous operation of intelligent devices that capture, analyze, classify and act on a fusion of rich data sources such as images, sounds, radar, infrared or vibrations. GAP8 was designed with ultra-low energy usage – from a few tens of miliwatts in active mode to a few microwatts in sleep mode – so devices can last for years on a battery. Let’s explore some of the exciting ways customers can use GAP8 to innovate.

Here’s a fun project for kids or anyone who’s a kid-at-heart. With GAP8, you can bring the first autonomous toy car to life! The GAP8 processor enables you to program your toy car to identify objects and recognize its surroundings to safely navigate. You can create a car that follows lanes, responds to voice directions, reads signs, gives pedestrians the right of way and even follows speed limits. The small size of the processor makes it easy to create slim designs, and its long battery life means your autonomous toy car can run for years. You can also use GAP8 to create other types of cool toys like smart robots and connected dolls. The sky is the limit! 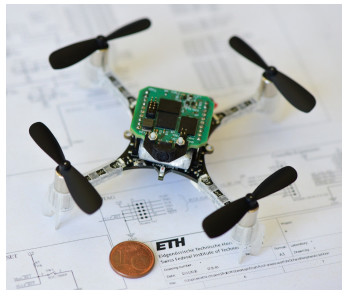 GAP8 is suitable for a wide range of IoT applications, delivering the computational and power agility necessary to integrate sophisticated signal processing and artificial intelligence into small, battery operated devices living on the very edge of the network. This mix of ultra-low power and high performance is ideal for devices such as consumer and medical wearables, home surveillance systems, consumer robotics and autonomous micro-drones.

For industrial applications, GAP8’s ability to monitor a wide variety of data sources is extremely valuable. GAP8 can conduct people counting for retail stores and stadiums, along with facial and emotional detection and recognition for secure areas like corporate campuses. These solutions provide a low cost and easy way to detect security threats and keep people safe. GAP8 can even interpret vibrations, which is useful for factory environments to ensure equipment is functioning properly. Low power long range wireless networks can be used to collect pre-analyzed sensor feedback and to allow more sensors to be installed cost-effectively.

Another key benefit of GAP8 is that it enables information to be processed at the edge, without the privacy concerns of sending information to the cloud. Whether a device is processing voice inputs, sensitive medical data or trade secrets, consumers and companies alike want to make sure their information is secure.

Learn more about the applications for GAP8 here: https://greenwaves-technologies.com/solutions/.

Martin Croome is VP of Marketing at GreenWaves Technologies. Martin obtained his BSc(Hons) in Computer Science from the University of Edinburgh in 1987. After working in several technical roles, he joined HP in 1989. During 11 years in HP he worked in many marketing roles for both PC, mobile and networking product ranges including Product Marketing Manager of HP’s handheld division in Singapore. After leaving HP in 2000 he set up the European operations of a U.S. startup Socket Mobile. In 2012, he joined Option Wireless where he held marketing and business management roles in the 3G and 4G data modem and IoT Gateway product lines. He was responsible for the conception and development of the Option CloudGate IoT Gateway and the Option LuvitRED IoT application generator. At GreenWaves Technologies he is responsible for marketing of the GAP8 IoT Application Processor.

I have a mix of Product Management/Business Development experience and Software/Architecture development. Currently I'm working in a fab-less semiconductor startup doing things that will revolutionize intelligent sensors that process fusions of image, sound and motion. We are allowing this to be done at energy levels that allow years of operation on batteries, cutting all the cables and drastically reducing intelligent sensor installation and operating costs.