As the Internet of Things (IoT) continues to scale, one of the key characteristics emerging as a business enabler for IoT is location. Companies are deriving real business value from the information location can provide. That includes both the data they are gathering and analyzing as well as the efficiencies that are created by knowing the precise location of a person or thing.

Location is becoming king across dozens of industries:

The list of use cases where location has become a valuable business enabler goes on and on. Bluetooth has emerged as a technology of choice for location, and got a further boost in January, when the Bluetooth Special Interest Group (Bluetooth SIG) announced a new direction finding feature as part of version 5.1 of the Bluetooth Core Specification. The new release formalizes the addition of directional capabilities to Bluetooth proximity solutions, with the goal of providing improved accuracy for Bluetooth-based real-time location systems (RTLS).

The accuracy level required for IoT is relative, and, of course, depends on the specific needs of each use case. In some cases, such as tracking fast-moving players and equipment in a sports environment, accuracy within a dozen centimeters is required. In a logistics environment, where companies want to quickly determine the location of a specific pallet or container, understanding accuracy within a few meters is probably good enough.

In many cases, however, it’s the combination of accuracy and delay that is so valuable. Knowing the precise location of something in real time is complex for many reasons because of the infrastructure present in many of these environments. Concrete walls and floors, steel support beams and other infrastructure often interferes with or blocks wireless signals, making achieving location accuracy difficult. However, the new Bluetooth direction finding feature contains two methodologies that are helping to mitigate these losses, lower the system architecture complexity, and improve location capabilities: the Angle of Arrival (AoA) and Angle of Departure (AoD) methodologies.

AoA and AoD each utilize angular direction estimation to determine positioning, but are intended for different markets. AoA is already in commercial use today across a wide range of industries and use cases, such as asset tracking in industrial IoT (IIoT) use cases. AoD, meanwhile, may soon start gaining tracking in robotics, AGV, and AI applications where the moving object has the capability to compute its own location. Full scale AoD will be achieved by reaching the consumer market with the participation of the software operating system (OS) and hardware original design manufacturer (ODM) providers.

The AoA methodology utilizes a network-centric architecture in which a tag or smartphone—or virtually anything with a Bluetooth transmitter—is tracked by its position. Each device uses a single antenna to make its location available to the location service application through the transmission of direction finding-enabled packets. A multi-antenna device (aka Locator) receives the radio signal and pre-process the data for angular estimation. The data is then sent to a positioning engine, which further processes the data coming from one or many Locators and it computes the location coordinates of the tag (see Diagram 1). 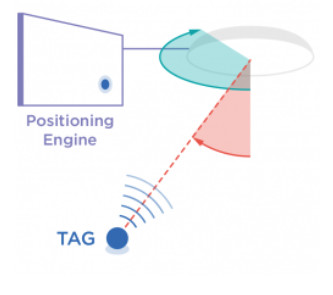 Because the intelligence is on the network side rather than on the device, AoA is the most effective solution for industrial and enterprise use cases that require consistently reliable location capabilities and where the cost of the tags must be contained. A good example is asset tracking for industrial environments, where knowing the precise location of a specific piece of equipment in a large warehouse saves the time and productivity loss associated with manually searching for it. In fact, even before the direction finding feature was formalized, systems based on AoA were already being used in dozens of industries and enterprise use cases, from asset tracking and safety applications in industrial environments like manufacturing, oil & gas and logistics, to productivity use cases in smart buildings and smart hospitals.

With AoD, the intelligence is in individual devices, such as a smartphone, a tablet, or a robot. Each mobile device has a single antenna and directly runs the positioning engine. The device receives the radio signal transmitted by the multi-antenna device, aka the Locator. Note that in principle, the same locator can be used for enabling both AoA and AoD, simultaneously.

In this mobile-centric architecture, the power consumption is on the device side. This works well for devices like smartphones that can be plugged in and recharged frequently. In AoD, the Locators might be configured as a low-power device that could be battery-operated for several years, similarly to tags in AoA systems, which can have a long battery life. Because the intelligence resides in the device and only a few active transmitting devices (Locators) are needed to cover the tracking area, AoD offers both the system capacity and scale required for consumer (B2C) use cases. (see Diagram 2) 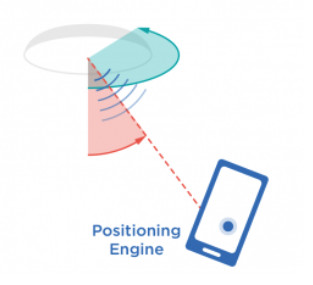 In other words, the Locators can be seen as a “multi-antenna beacon;” i.e., the next generation of the commonly used BLE beacons that are today used for power (RSSI)-based proximity positioning. In AoD, the Locator is a multi-antenna BLE beacon, which instead of using a single antenna for transmitting the signal, uses an antenna array.

AoD is still in its early days but because of the broad range of potential new precision location services it creates for the previously untapped consumer market, it is on the watchlist of many companies. With the lessons learned from AoA, and the potential it opened in the enterprise and industrial markets, AoD is poised to find success on a massive scale. Two things will help accelerate AoD significantly:

The Bluetooth 5.1 specification heightened industry interest in and momentum around location. It defined the radio interface up to low-level IQ data samples. However, individual RTLS vendors have been left to interpret the location system architecture themselves and build additional capabilities on top of the standard. A few have already successfully done so using IQ data combined with their own algorithms, software tools, and positioning engine. Bluetooth SIG created the specification so that AoA and AoD can work within the same RTLS system, but a fully functioning AoD solution requires the participation of the OS vendors as indicated above.

As the IoT continues to scale, location is becoming a key business enabler and the RTLS and location-based services markets are prospering, especially in the enterprise and industrial IoT markets. Going forward, open, flexible systems that help companies achieve their business goals will not only meet but exceed goals.

Coexistence of AoA and AoD

The AoA and AoD methods are not mutually exclusive and a system architect can design an engineering solution using either or both technologies simultaneously.

For example, it is possible to conceive a solution for IIoT where Locators are mounted in the environment and used as AoA/AoD enablers. That means for AoA, the Locators are receiving the signal transmitted by tags or phones. The whole system can be thought of as a single-input multiple-output (SIMO) system, where a single antenna tag is transmitting and a multi-antenna device is receiving. On the other hand, for AoD, the Locators are transmitting the signal using a multi-antenna radio interface and the mobile device receives using a single antenna. In such cases, the whole system can be thought of as a multiple-input single-output (MISO) system, where multiple antennas are transmitting and a single antenna is receiving.

When properly designed, the Locator can carry out both AoA and AoD operations simultaneously—it can be used for tracking tags at the same time it enables mobile devices to autonomously compute their own location. This all makes the AoA and AoD methodologies a powerful combination for enabling a large number of use cases—all in the same infrastructure device.

Fabio Belloni is chief customer officer and cofounder of Quuppa, focusing on accelerating the success of its partner companies. He is a frequent contributor and the author or co-author of numerous academic papers, and has several granted patents and pending patent applications.