Supply Chain Management in the Days of Coronavirus

Joseph Smetana joined Digilent in the role of Supply Chain Manager just before the COVID-19 pandemic caused component suppliers and manufacturing operations to shut down.

There is a visual joke circulating the internet. The caption is, “Worst Purchase Ever!” The accompanying photograph is of a 2020 Day Planner. Unfortunately, while this may elicit a wry smile, trying to make plans in the middle of a pandemic is no laughing matter.

What? You want a concrete example? Well, it just so happens that I was chatting with Joseph Smetana. Joseph joined Digilent on Jan 20, 2020, as a supply chain manager, where the term “supply chain” refers to the system of organizations, people, activities, information, and resources involved in supplying a product or service to a consumer. 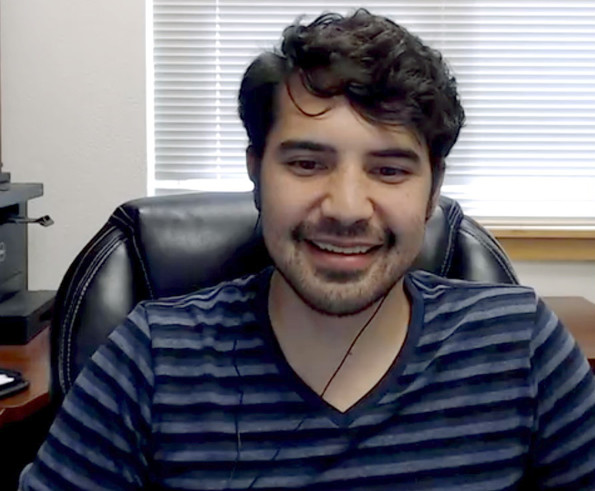 Joseph was joining Digilent at an exciting time in the company’s history. Founded in 2000, Digilent has predominantly been associated with academia. The company’s original mission was to make electrical engineering and design technologies understandable and accessible to all by supplying educators and students with high-value, industry-relevant, educational tools and curriculum.

More recently, Digilent decided to harness its unique knowledge of FPGAs, USB instrumentation, and software to serve professional engineers in the embedded measurement space. This space touches on all of the latest and greatest application areas and market segments including the IoT, software-defined radio (SDR), AI and machine learning capable products, and devices targeting augmented reality (AR).

As I discussed in Big Things in Store for Digilent in 2020, at the beginning of 2020, Digilent introduced its first offering, the Eclypse Z7, to be fully targeted at embedded measurement applications. It features a Xilinx Zynq-7000 System on Chip (SoC). The combination of the Eclypse Z7 with Pmod and Zmod expansion cards addresses the needs of professional engineers involving in the prototyping, design, verification, and test of the products that are going to drive the next decade.

Prior to adopting his new position at Digilent, Joseph had spent nine years in the planning group of another electronic manufacturing company working closely with the design, inventory, manufacturing, and shipping departments. He was looking forward to the task of managing the supply chains for Digilent’s existing lines of academic products and its new lines of professional products.

As Joseph told me, there is an expectation that the supply chain manager will keep components coming in, products on the shelves, and shipments heading out of the door. Unfortunately, a little over than one month into the job, while still establishing relationships inside and outside the company, and navigating the challenges of transitioning into his new role, the COVID-19 pandemic surged around the world. Around the end of February, just four weeks after Joseph had joined the company, Digilent decided that everybody who could, should start working from home.

There’s an old saying that hindsight is the one exact science. Even after COVID-19 was acknowledged to be a worldwide pandemic, there were conflicting views as to how bad it would get and how long it would last. When Joseph checked with his component suppliers and manufacturing plants around the end of February, everyone assured him that there were no issues.

By early March, a lot of professional engineers had also started working from home. However, although the vast majority of these engineers had access to computers, not everyone had the design and test equipment they required (only one person can take the team’s oscilloscope home, for example). In order to help out, as described in Digilent Helps Home-Bound Engineers with Deep Discounts, Digilent instigated a 20% discount on a selection of products they felt would be most valuable to engineers working at home. An example of one of these products is the extremely popular Analog Discovery 2 (AD2). You can only imagine Joseph’s surprise and delight to hear this news and to see the corresponding flood of new orders rushing in. 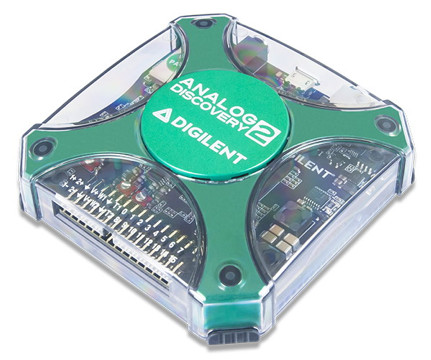 As the weeks went by, Joseph continued to monitor the situation, which steadily grew more and more dire. Many component suppliers and manufacturing operations shut down, and a large proportion of components that had originally been expected to be available were diverted to medical and research applications.

By this time, the majority of colleges and universities had terminated in-person, onsite classes, and students had started to take online classes from home. Dohn Bowden, Assistant systems lab manager at the University of Massachusetts – Lowell, was kind enough to send me a picture of a laboratory that would normally be jam-packed with students working furiously. 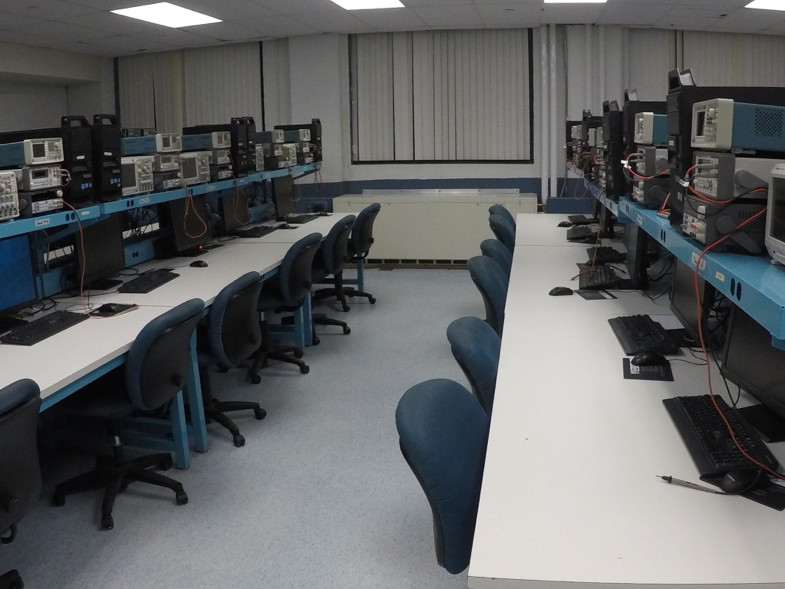 As a result, colleges and universities around the world started placing larger-than-usual orders. The situation was further exacerbated by the fact that summer classes were fast approaching. Realizing that it was unlikely students would be returning anytime soon, educational establishments began to place bulk orders for products like Analog Discovery 2. Once again, you can only imagine Joseph’s joy see this new onrush of orders.

Of course, some users were fortunate enough to “beat the rush” because they placed their orders prior to the crisis. In the images below, for example, we see the home workbenches of Carlos Orendain, who is a student at the University of Guadalajara, and Adam Irwin, who is a third-year mechatronics student and research assistant at Deakin University in Australia. As can be seen, Carlo and Adam are both taking full advantage of their Analog Discovery 2 devices. 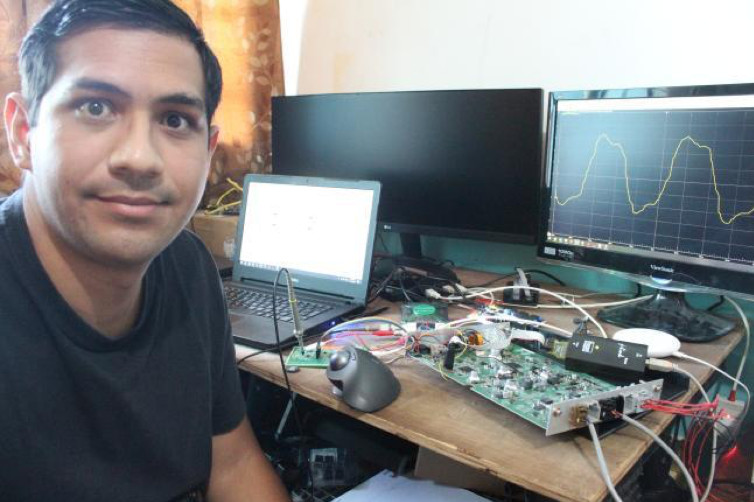 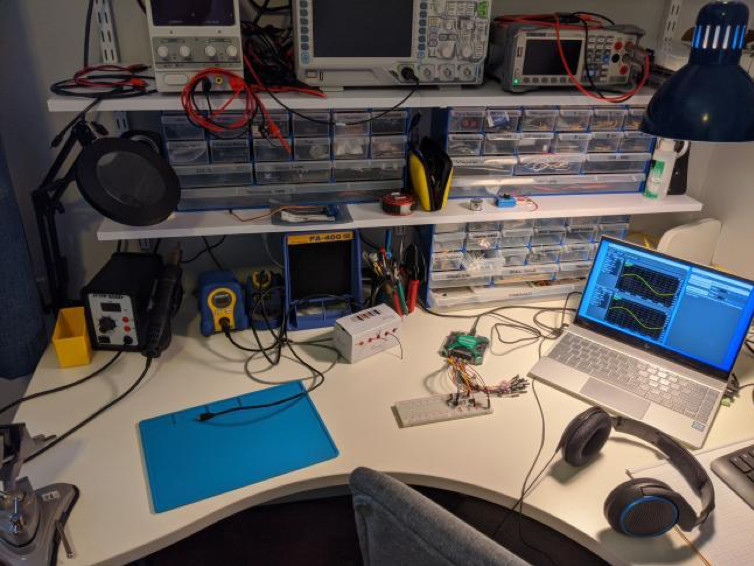 As Adam told me, “In 2019, I'd had some difficulties doing schoolwork at home as I had limited equipment, which made the testing of projects difficult. At the end of the semester, I managed to get a job over the summer as a research assistant for one of my professors and I decided to setup a small workspace to make things easier for the coming year. I picked up a digital multimeter and an oscilloscope, and then I decided to get an AD2 for its wave-generation feature. I managed to get everything set up by the end of February. This was timely as on the second day of classes in early March, everyone was sent home due to Covid. The AD2 has been invaluable for practical assignments; also, being able to get easy screen grabs of waveforms and measurements for lab reports has been incredibly handy. I've also managed to build up a small stock of parts, and the AD2 is amazing for trying new circuits quickly.”

Carlos and Adam consider themselves to be lucky to have received their Analog Discovery 2s before the coronavirus crisis commenced. By comparison, the two images below show the home workbenches of Nicholai Dimech and Jean Callus who are both students at the University of Malta. One thing that is conspicuously absent from both pictures are their Analog Discovery 2 units, which are currently on backorder. 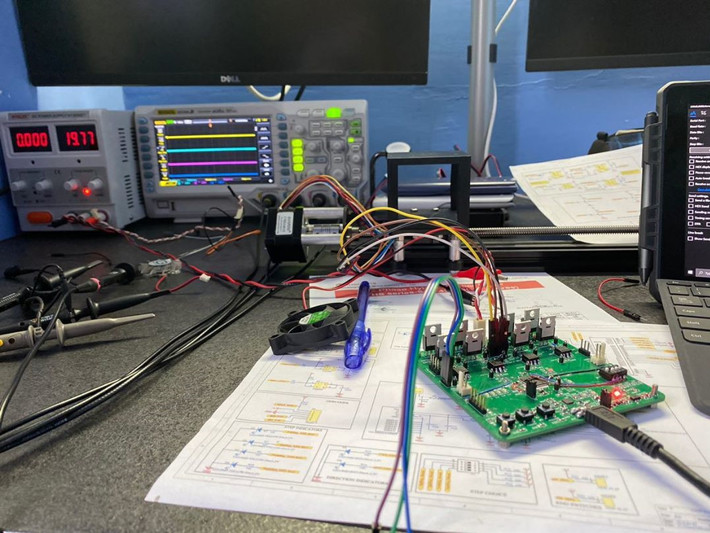 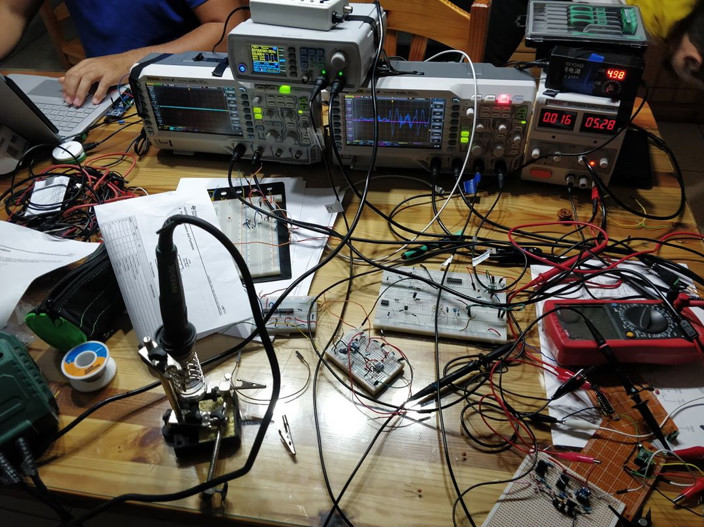 Happily, it looks like there is light at the end of the tunnel. Joseph tells me that, around the middle of June, he started to see component factories opening up again, at least partially. At the time of this writing, Joseph says that most of the factories he works with are back to full capacity and are racing to clear their own backlogs.

Although there are still long component lead-times, the news is getting better day by day. As one point of reference, some of the parts that Joseph ordered in June were originally scheduled for delivery in January 2021, but this date has now been brought into October 2020.

Manufacturing operations are also back online, snapping up the components as soon as they come in, and Digilent is creating and shipping major builds on a monthly basis. The company is making the current academic school year its top priority, providing products with deep academic discounts to educational establishments as opposed to targeting the deeper pockets of professional audiences. In the image below, for example, we see a pile of 50 newly arrived Analog Discovery 2 units sitting on the desk of Keith Graham, Instructor at Colorado University in Boulder. Keith says that they already have 800+ Analog Discovery 2 units out in student hands this semester. 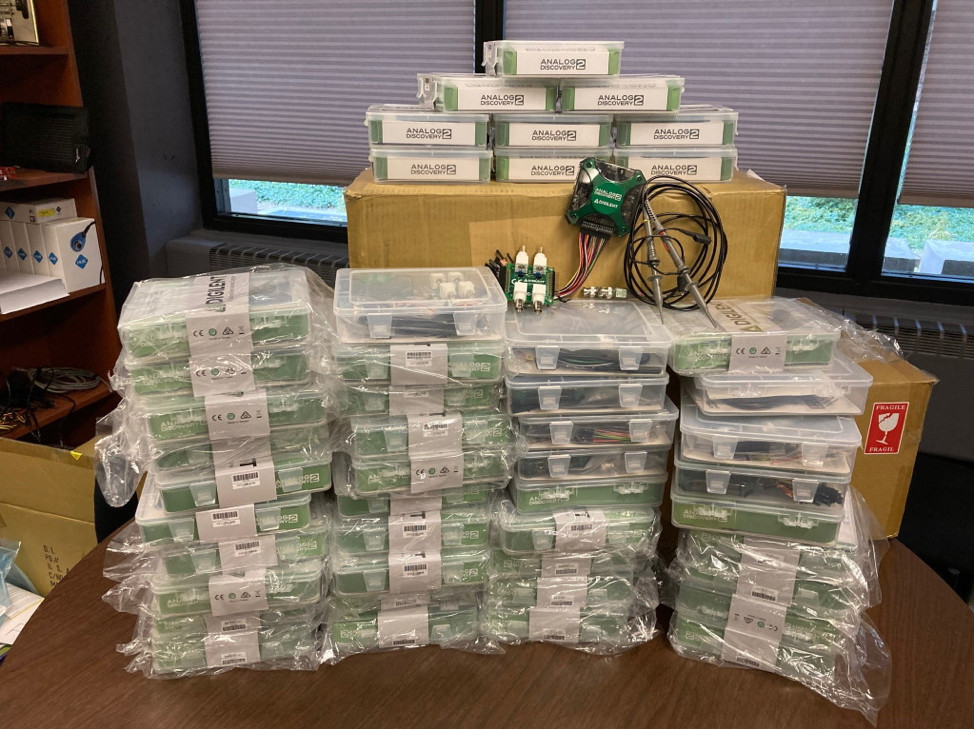 At the time of this writing, the October build has already been shipped, the November build will be coming in shortly, with the December build following soon after. Each build is increasing in size as more components become available and manufacturing capacity ramps up. Joseph tells me that Digilent is actively working on a 15,000 unit Analog Discovery 2 build with completion planned in early 2021, which will make this the biggest build they have ever done (you can track progress and request updates on the Analog Discovery Shortage page).

It’s interesting to look back on how a company like Digilent responded and continues to adapt to the ever-changing circumstances associated with a crisis like the COVID-19 pandemic. Meanwhile, Joseph has started to sleep just a little easier at night. All I can say is that I’m glad I don’t have his job. How about you? Do you have any tales you would care to share about how you and/or the company you work for has responded to the pandemic?