The design assignment is clear: build a small datalogger which will be inaccessible once in place, yet must operate for a minimum of 20 years.

The design assignment is clear: build a small datalogger which will be inaccessible once in place, yet must operate for a minimum of 20 years. Battery replacement is not an option, so you do the basic math on the current requirements of the unit times lifetime objective, add a 2× “safety factor,” and select a primary non-rechargeable battery with the calculated milliamp-hour (mAH) capacity rating. The problem of providing power for two decades or more is solved, right?

Reading through the details of the selected battery data sheet, there’s a passing mention of “self-discharge” of the battery, independent of any load. This self-discharge is anywhere from 4-7% annually of the battery’s initial capacity. Revisiting the numbers again, you see that the battery’s actual useful life will be far less than the first simple calculation indicated. In fact, between 40-70% of the battery capacity will be gone after a decade, even without any energy drain due to the datalogger itself.

The most obvious solution is to get a larger battery with enough additional mAH capacity so that self-discharge is no longer a factor. But, there’s no room for that larger battery, so it’s back to re-thinking the entire power source situation.

What are the options? There are several:

•Get the size constraint on the data logger changed and go with that larger battery (may not be acceptable, and adds cost as well).

•Look at a rechargeable (secondary) battery if – and it’s a big “if” – it can be charged via some sort of harvesting scheme.

•Get a “better” battery cell of the same physical size and mAH rating, but also having lower self-discharge (they do make them) and use it as specified by the vendor so it can last for decades in the application.

•Use a supercapacitor (formally called an electric double-layer capacitor, or EDLC), perhaps in conjunction with a battery and IC to manage energy storage, flow, and perhaps even recharging (again, recharging it from what?).

The rechargeable battery option seems attractive but has two drawbacks. First, even a quality rechargeable battery is good for only a few thousand charge/discharge cycles – and that’s with appropriate battery management. You’ll need a specialized IC for coulomb counting or other management approach, but that’s no problem.

Second, while harvesting seems like a “free” source of energy, it’s not. You need the harvesting transducer (solar? vibration? temperature changes? air/water flow?) and harvesting management circuitry, again an IC. There’s no assurance that the energy source you are harvesting will still be viable and available in 10 or 20 years. After all, trees grow and shade solar cells, things get moved “in the way”, and there are many other causes of light blockage looking into the future. Other harvest sources and their transducers have comparable potential problems. Plus, the amount of energy that can be harvested by a small transducer setup is quite modest and may be insufficient for the application.

•Supercapacitors could be a good option. Unlike chemical batteries and their chemical processes which degrade over time, supercaps rely on a physics phenomenon and so do not have the charge/discharge cycle limit of rechargeable batteries. But you still have to provide the initial and replenishment energy for the supercap.

That’s why you may need to think “out of the battery” for this application. There are primary, non-rechargeable cells, such as those from Tadiran with self-discharge of just 1%, which means they are viable for decade-long use. For example, their TL-4902/S LiSOCl2 primary battery can supply 10 µA for 100,000 hours with no decrease in output voltage. However, they are intended for applications with very low drain and not for higher-power pulsed-current loads (even if the total energy expenditure is the same). 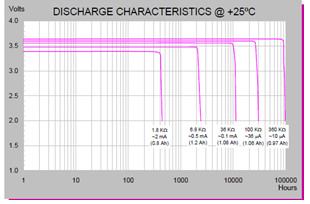 The reason is that an inherent battery characteristic called self-passivation increases with current drain. That in turn increases self-discharge. As a result, the application itself must have low, relatively constant load drain, rather than low duty cycle pulsed demands for power. However, many data logger-type applications have long periods of deep sleep and then have bursts of activity, especially if they have a wireless link.

It turns out that a viable solution may be to use a battery with very low self-discharge coupled with a supercap and use the former to trickle charge the latter. In turn, the supercap can provide the power pulses that the application needs – supercaps are good at delivering power pulses without degradation or loss of power. There are ICs such as the TPS62740 from Texas Instruments which are designed to pair up a battery with supercap in this configuration, Figure 2. Yes, there’s a cost (IC, battery, supercap) but it may make the most sense in the end.

Providing power for decades, even at ultra-low current levels, is a difficult design challenge regardless of energy source and approach chosen. It’s too bad you can’t use one approach that is fully tested and known to work: harvest a thermal source such as the decay of radioactive plutonium.

That technology has powered many long-range/duration spacecraft, including the identical Voyager 1 and Voyager 2 which were both launched in 1977 with a planned mission lifetime of just five years. Now, 42 years later, Voyager 1 is about 11.5 billion miles for Earth, while Voyager 2 is over 13 billion miles away, and both recently left our heliosphere (area of our Sun’s influence). Their initial 500-W power subsystems, formally called Radioisotope Thermoelectric Generators (RTGs) are still functioning more than four decades, yielding about 250 W at present and allowing their instrument suites to still send back data.

But for your datalogger, using a plutonium-based energy source is not an option, of course. So you’ll have to resort to primary batteries, secondary batteries, supercapacitors, and energy harvesting in some arrangement to meet the project objectives.