Is that a Battery, is that a Capacitor? No, it's Supercap!

With capabilities including high cycle life and fast charge and discharge times, small-cell supercapacitors can oust coin-type batteries from back-up power duties in equipment ranging from IoT devices, smart meters, or medical devices, to automotive electronics and industrial computing. Typical applications include maintaining the system’s real-time clock or volatile memory when the main system power is removed, such as during a power outage or when the main system battery has been removed for replacement.

Using a supercapacitor in these situations enables product manufacturers to set users free from the restrictions imposed by finite battery lifetimes. They can also eliminate the expensive and bulky battery holder from the PCB bill of materials, in favor of a small, soldered-down device, and eliminate manufacturing challenges such as managing battery shelf lives and inserting batteries prior to shipping. The supercapacitor’s benign open-circuit failure mode contrasts with typical short-circuit battery failures that may result in outgassing or ignition.

Supercapacitors in capacitance values up to 5 Farads present the most cost-effective alternative to small backup batteries, and can store enough energy to provide backup for durations ranging from a few seconds to several days, depending on the type of load and current demand.

A Peek Under the Cape

The supercapacitor, also known as the Electric Double-Layer Capacitor (EDLC), comprises two electrodes coated in a porous material, which is usually carbon-based, separated by an electrolyte that is itself divided by a membrane.

Unlike a battery, the supercapacitor stores and releases energy quickly through physical adsorption and desorption of ions in the electrolyte contained between its electrodes. These processes are much faster than the chemical reactions involved in battery charging. Given the supercapacitor’s low internal resistance, the device can be fully charged within a few seconds whereas a secondary cell can take from 10 minutes to several hours to be fully charged. Moreover, there is no theoretical limit to cycle life, whereas a lithium-ion secondary cell has a finite lifetime of about 500 cycles.

The electrolyte also has an important influence over device properties, and typically is either an organic compound or an aqueous solution. Aqueous electrolytes are highly conductive low environmental impact and non-flammable, yielding strong performance and safety credentials. They also typically have greater resistance to moisture absorption than organic compounds, resulting in longer lifetime with better stability.

For all device types, the electrolyte properties determine the overall supercapacitor terminal voltage. The voltage, when fully charged, is usually less than 3V.

A conventional approach to construction of small-cell supercapacitors is comparable to that of a coin cell, comprising lower and upper metal cases that are joined by swaging and enclose the carbon electrodes and organic electrolyte. Although an internal gasket aids sealing, the electrolyte can dry within a relatively short lifetime, and thermal shock can compromise structural integrity.

KEMET’s small-cell supercapacitors feature a high-strength vulcanized rubber bond that ensures high safety against liquid leakage. The cross-section of figure 1 shows how these supercapacitors are constructed, including the aqueous electrolyte, rubberized electrodes, and separator membrane.

To achieve a desired output voltage higher than the base voltage of a single cell, several cells are connected in series. Coin-type supercapacitors, for example, are often stacked inside an external can, or within a tube of heat-shrink material, and electrodes attached to the upper and lower surfaces.

Supercapacitors containing aqueous-electrolyte can be stacked efficiently to achieve higher voltage ratings within smaller case sizes, with the added advantage of a strongly bonded seal to protect against thermal and mechanical shock. Robust and reliable devices can cover a wide range of operating voltages, from 3.5V to 12V. Figure 2 shows how such a multi-cell structure is encased in a resin-molded package. Alternatively, the outer packaging can be a sealed metal can, and terminations can be either through-hole or surface-mount. 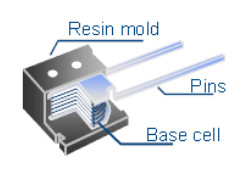 In the Real World

In addition to having special powers and an aka – like any favorite superhero – supercapacitors also possess vulnerabilities. They require current above a minimum threshold, called the absorption current, while charging, and just like ordinary capacitors, are prone to leakage and parametric change due to environmental effects and aging.

The absorption current that occurs during charging results from the redistribution of ions within the porous electrode material. Ions that are initially absorbed on the surface tend to diffuse into the electrode structure over time, consuming a proportion of the current flowing into the device. For this reason, a high initial current is needed to continue charging the supercapacitor. It can take many hours for the absorption current to decay to a stable value of leakage current typically in the order of a few microamps (µA).

Parametric changes can occur as the result of environmental conditions such as high ambient temperature or humidity, as well as aging. Devices with aqueous electrolyte are inherently better able to withstand high temperatures and humidity without drying or absorbing moisture, compared to alternatives with organic electrolyte and hence typically exhibit greater stability. Figure 3 compares the shift in equivalent series resistance (ESR) for aqueous and organic types when exposed to increasing temperature, showing how the aqueous type has significantly greater temperature stability. 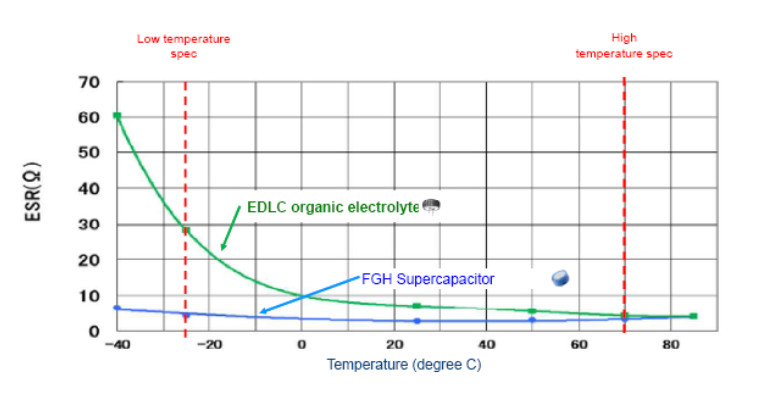 Supercapacitors offer a high-performing alternative to batteries in a wide variety of backup-power applications, delivering far greater cycle life and avoiding any need for designers to worry about battery replacement or recharging.

Improvements in electrode materials and electrolyte formulations enable these powerful devices to store more energy and stack more easily to provide the required output voltage. The latest supercapacitors featuring aqueous electrolyte are ready to come to the rescue in RTC hold-up and NVM backup applications throughout energy, security, automotive and medical market segments. 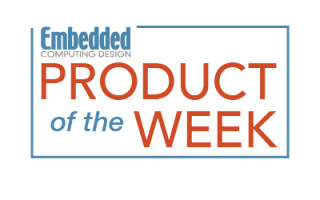 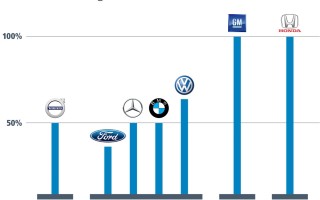