This article explains how DNNs work and why FPGAs are becoming popular for inference tasks. It proceeds to showcase how DNN workloads can be executed on a development platform using a real world demo.

Machine learning is the process of using algorithms to parse data, learn from it, and then make a decision or prediction. Instead of preparing program codes to accomplish a task, the machine is "trained" using large volumes of data and algorithms to perform the task on its own.

Machine learning is being revolutionized using neural network (NN) algorithms, which are digital models of the biological neurons found in our brains. These models contain layers which are connected like a brain’s neurons. Many applications benefit from machine learning, including image classification/recognition, big data pattern detection, ADAS, fraud detection, food quality assurance, and financial forecasting.

As algorithms for machine learning, neural networks include a wide range of topologies and sizes consisting of multiple layers; the first layer (the "input layer"), middle layers (the "hidden layers") and the last layer (the "output layer"). Hidden layers perform a variety of dedicated tasks on the input and pass it to the next layer until, at the output layer, a prediction is generated.

Some neural networks are relatively simple and have only two or three layers of neurons, while so-called deep neural networks (DNNs) might comprise up to 1000 layers. Determining the right topology and size of the NN for a specific task requires experimentation and comparison against similar networks.

In this article, we will discuss how DNNs work, why FPGAs are becoming popular for DNN inference and consider the tools you need to start designing and implementing a deep learning-based application using FPGAs [1].

Designing a DNN application is a three-step process. The steps are choosing the right network, training the network, and then applying new data to the trained model for prediction (inference). Figure 1 illustrates the steps for an application to recognize cats. 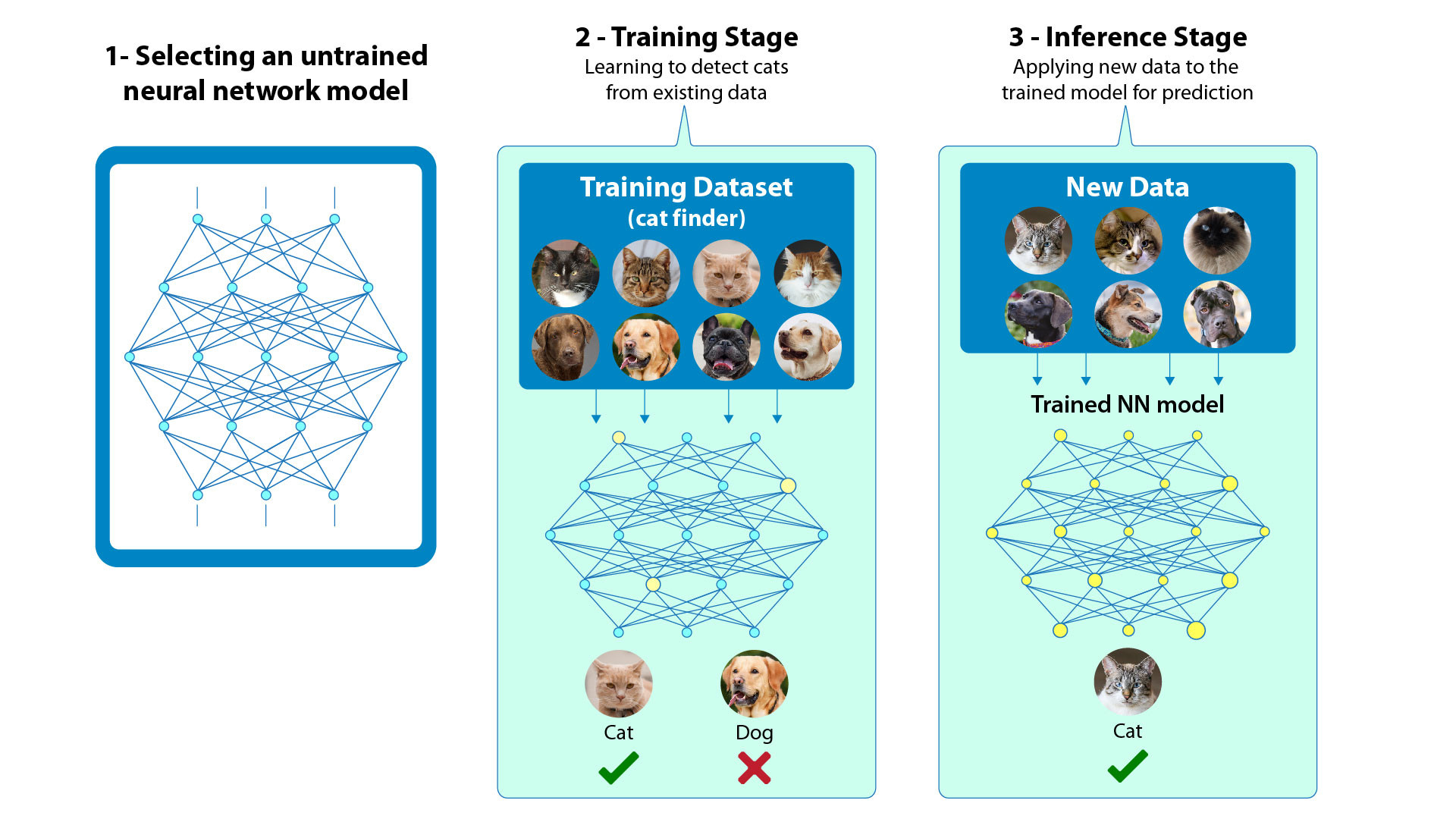 Figure 1. The three steps of recognizing a cat.

As mentioned, there are multiple layers in a DNN model, and each layer has a specific task. In deep learning, each layer is designed to extract features at different levels. For example, in an edge detection neural network, the first middle layer detects features such as edges and curves. The output of the first middle layer is then fed to the second layer, which is responsible for detecting higher level features, such as semicircles or squares. The third middle layer assembles the output of the other layers to create familiar objects and the last layer detects the object.

In another example, if we set out to recognize a stop sign, the trained system would include layers for detecting the octagonal shape, the color, and the letters "S," "T," "O," and "P" in that order and in isolation. The output layer would be responsible for determining if it is a stop sign.

There are four main learning models:

In training, the untrained neural network model learns a new capability from the existing data. Once the trained model is ready, it is fed new data and the performance of the system is measured. The ratio of detecting the image correctly is called inference.

In the example given in Figure 1 (recognizing a cat), after inputting the training dataset, the DNN starts tuning the weights to find cats; where a weight is a measure of the strength of the connection between each neuron.

If the result is wrong, the error will be propagated back to the network’s layer to modify the weights. This process happens again and again until it gets the correct weighting, which results in getting a correct answer every time.

How to Achieve A High-Performance DNN Application

There are two main ways to optimize a DNN application. The first is network optimization through pruning redundant connections and quantizing the weights and fusing the neural networks to narrow down the network size.

The second way to optimize the DNN is through computation acceleration, using ASICs or FPGAs. Of these, the latter option has many benefits for machine learning applications. These include:

Modern FPGAs typically offer a rich set of DSP and BRAM resources within their fabric that can be used for NN processing. However, compared to the depth and layer size of DNNs, these resources are no longer enough for a full and direct mapping; certainly not in the way it was often done in previous generations of neural network accelerators. Even using devices like the Zynq MPSoC (where even the largest device is limited to 2k DSP slices and a total BRAM size of less than 10 MB) a complete mapping with all neurons and weights directly onto the FPGA is not possible.

So, how can we use the power efficiency, re-programmability, low latency, and other features of FPGAs for deep learning?

New NN algorithms and architectural modification are required to enable the inference of DNNs on platforms with limited memory resources such as FPGAs.

A modern DNN divides the applications into smaller chunks to be processed by FPGAs. Since the on-chip memory in FPGAs is not enough for storing all the required weights for a network, we only have to store the weights and parameters for the current stage, which are loaded from an external memory (which could be a DDR memory).

However, transferring data back and forth between the FPGA and memory is going to increase the latency up to 50 times. The first thing that springs to mind is to reduce the memory data. In addition to the network optimization discussed above (pruning and quantization), there are:

Design and Implementation of DNN Applications on FPGAs

Let's dive into implementing a DNN on an FPGA. In doing so we'll take advantage of the most appropriate commercially available solutions to fast-track the development of an application.

For instance, Aldec has an embedded development board called the TySOM-3A-ZU19EG. Along with a wide range of peripherals, it carries the largest FPGA in the Xilinx Zynq UltraScale+ MPSoC family, a device that has over a million logic cells and includes a quad-core Arm Cortex-A53 processor running up to 1.5GHz.

The DPU is a programmable engine dedicated to convolutional neural network (CNN) processing. It is designed to accelerate the computing workloads of DNN algorithms used in computer vision applications such as image/video classification and object tracking/detectio.

There is a specific instruction set for the DPU, which enables it to work efficiently with many CNNs. Like a regular processor, a DPU fetches, decodes, and executes instructions stored in DDR memory. This unit supports multiple CNNs such as VGG, ResNet, GoogLeNet, YOLO, SSD, MobileNet, FPN, etc. [3].

The DPU IP can be integrated as a block in the programmable logic (PL) of the selected Zynq®-7000 SoC and Zynq UltraScale™+ MPSoC devices with direct connections to the processing system (PS).

The DNNDK is designed as an integrated framework, which aims to simplify and accelerate deep learning application development and deployment on the Deep Learning Processor Unit (DPU). DNNDK is an optimizing inference engine, and it makes the computing power of DPU become easily accessible. It offers the best of simplicity and productivity to develop deep learning applications, covers the phases of neural network model compression, programming, compilation, and runtime enablement [4].

These fit into the flow shown in Figure 2. 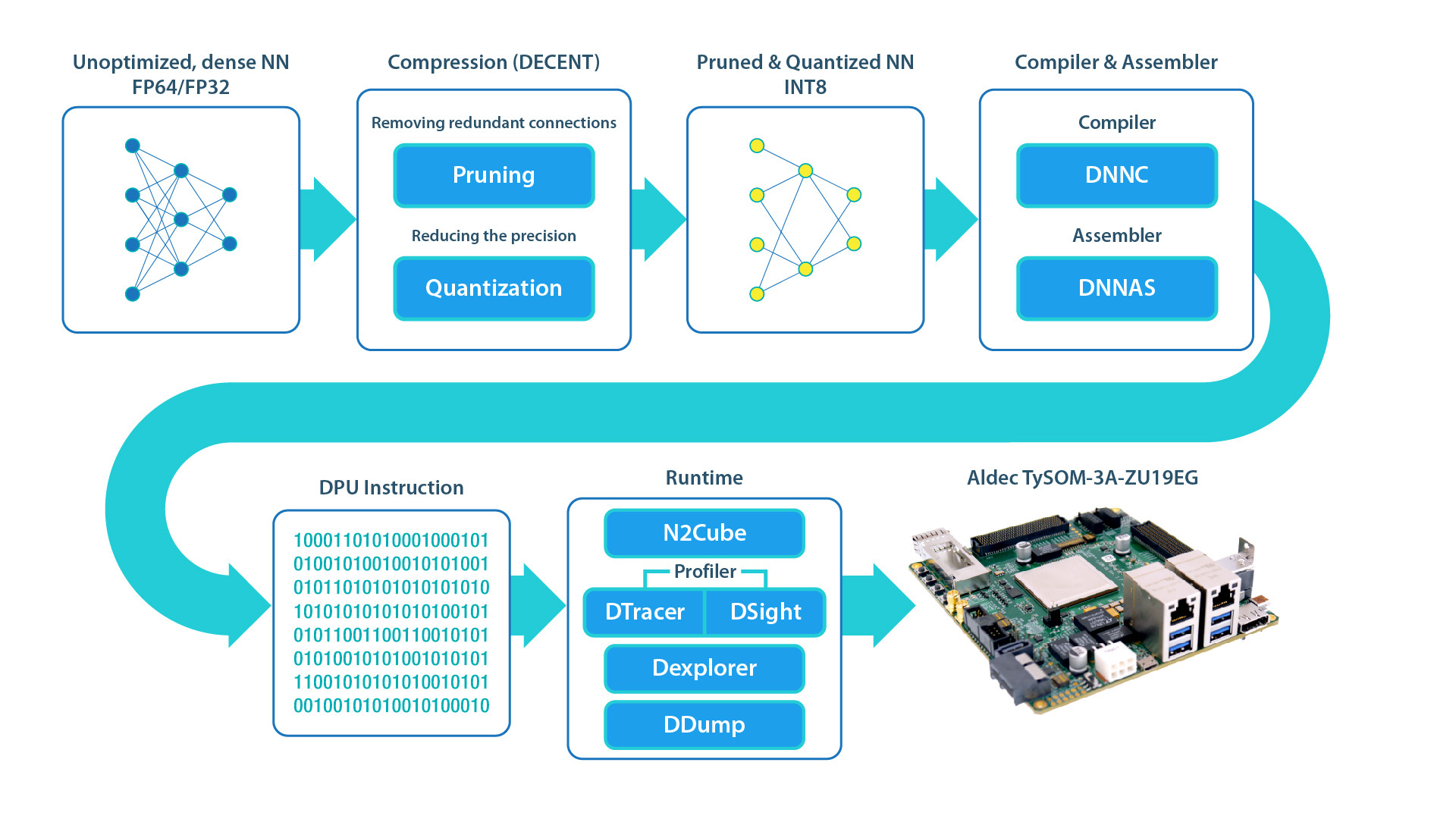 Using DNNDK makes the process of designing an FPGA-based machine learning project much easier for developers; In addition, platforms like Aldec’s TySOM-3A-ZU19EG board are also there to provide an invaluable kick-start. For instance, Aldec has prepared some examples – including gesture detection, pedestrian detection, segmentation, and traffic detection – that target the board, meaning developers are not starting with a blank sheet.

Let us consider one demo that was showcased at Arm TechCon earlier this year. It was a traffic-detection demonstration built using a TySOM-3A-ZU19EG and an FMC-ADAS daughter card that provides interfaces and peripherals for 5x high-speed data (HSD) cameras, RADAR, LIDAR, and ultrasonic sensors – sensory inputs for most ADAS applications.

Figure 3 shows the architecture of the demo. There are two DPUs implemented in the FPGA that are connected to the processing unit over AXI HP ports to perform deep learning inferencing tasks such as image classification, object detection, and semantic segmentation. The DPUs require instructions to implement a neural network, which are prepared by DNNC and DNNAS tools. They also need access to memory locations for input videos as well as output data. 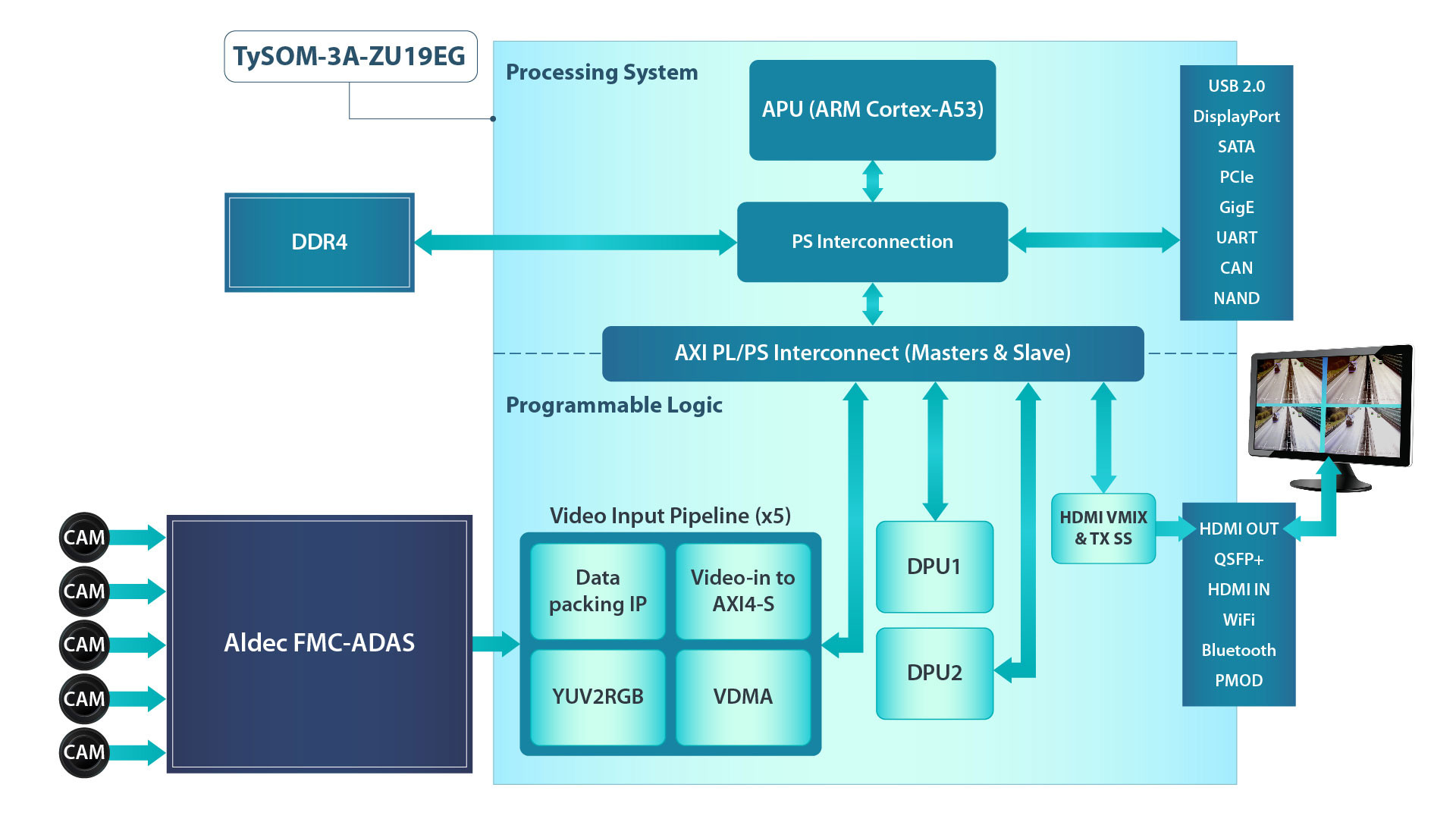 Developing and training the model is done using Caffe outside of the FPGA, whereas optimization and compilation is done using DECENT and DNNC units provided as a part of the DNNDK toolkit (figure 2). In this design, the SSD object detection CNN is used for background, pedestrian, and vehicle detection.

Farhad Fallah is an Applications Engineer at Aldec, Inc.

[2] FPGA-based Accelerators of Deep Learning Networks for Learning and Classification: A Review