The deployment of 5G networks in major cities around the world will mark one of the largest and fastest evolutions in networking infrastructure.

The deployment of 5G networks in major cities around the world will mark one of the largest and fastest evolutions in networking infrastructure. To inspire competition and innovation, the open radio access network, or ORAN, is an industry wide initiative to enable interoperability among hardware suppliers. The standardization of ORAN levels the playing field, driving better costs with more competition, and allowing operators to mix and match components to get the best performance from their system. Network providers, and by extension the consumers, will welcome the decreased costs that interoperability brings. With a growing number of components that need to be synchronized and the densification of the network, careful consideration of timing is critical. MEMS based oscillators and clocks are designed for the high accuracy and environmental resilience needed for timing in ORAN. 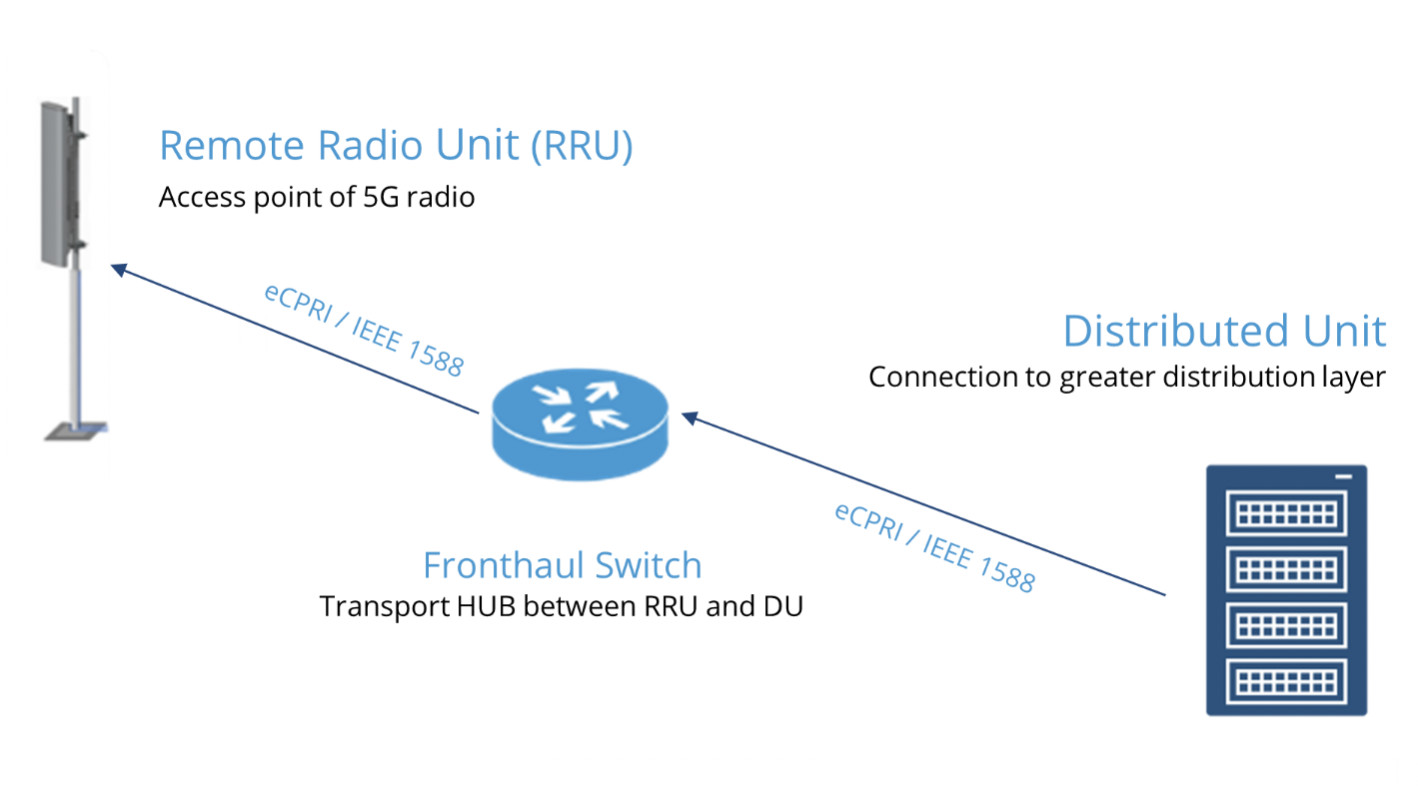 Figure 1: The general architecture of the radio access network, split into its three base components.

The ORAN architecture consists of three major components: the remote radio unit, the fronthaul switch, and the distributed unit. The remote radio unit (RRU) serves as the consumer’s access point to the network. The distributed unit (DU) acts as the connection to the central unit (CU) and greater mobile core. Finally, the fronthaul switch routes traffic between the RRU and DU.  Most importantly, these components need to be precisely synchronized to avoid data packet loss and system interruptions.

Before diving into methods of synchronization, first let’s understand time division duplexing (TDD) and why it’s becoming the dominant form of duplexing for 5G ORAN.  As opposed to frequency division duplexing (FDD), TDD separates outbound and inbound signals by transmission time slots, not separate frequencies. TDD offers more flexibility as the ratio of outbound to inbound transmission can be adjusted based on the demand at any one time, resulting in a more efficient use of the channel. This flexibility is necessary in 5G ORAN as upload and download demand are ever changing. Since TDD is dependent on an understanding of time, synchronization via IEEE 1588 Precision Timing Protocol (PTP) must be used. In addition to PTP, synchronous Ethernet (SyncE) is another underlying technology critical to synchronizing frequency, not time. Depending on the network architecture, either PTP, SyncE, or both can be used for synchronization.

PTP standardizes packet-based timing across the enhanced Common Public Radio Interface (eCPRI). Not only is PTP critical because it is the gateway to nanosecond time error, but it is also an intelligent system that can adapt to the loss of a grandmaster and can selectively reassign the “highest ranking” timing packet. The growing amount of data passing through the network at faster speeds makes the advantages of PTP synchronization crucial for a reliable ORAN. Therefore, oscillators and jitter cleaners that enable the highest performance from the IEEE 1588 protocol are just as crucial. 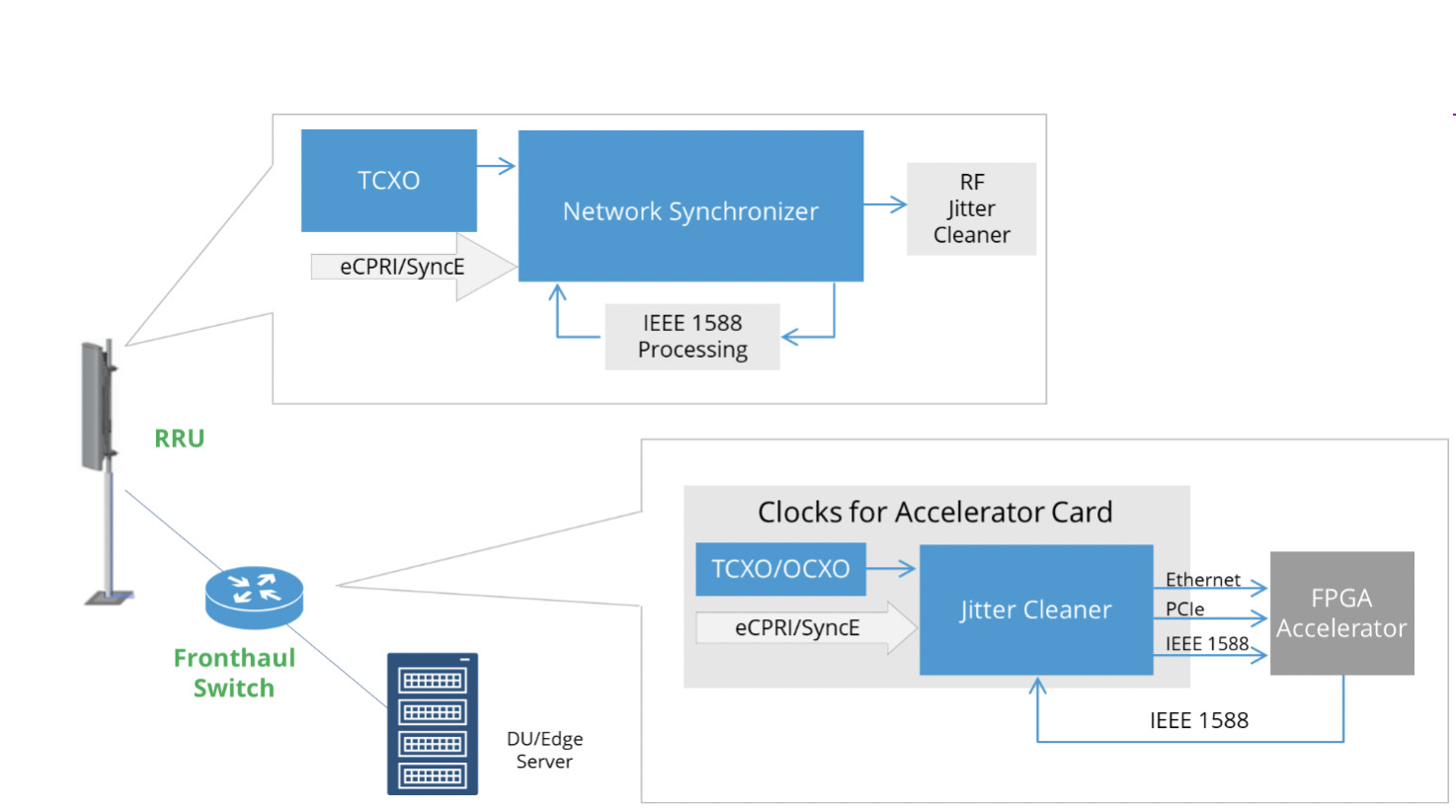 Of the three main components in the ORAN architecture, the RRU and has the least stringent stability requirement but it must be the most environmentally robust. The RRU must remain precisely synchronized to the rest of the network under heat, airflow, and vibration. The densification of radios in 5G ORAN requires them to be placed on rooftops and poles, near roads and highways, where the environmental conditions are all but forgiving. RRUs generally require the timing of a high performance TCXO such as the MEMS Elite Platform® Super-TCXO®. Similar in architecture to the RRU, the fronthaul switch uses a reference oscillator and jitter cleaner to clock an FPGA accelerator which also performs the IEEE 1588 processing. 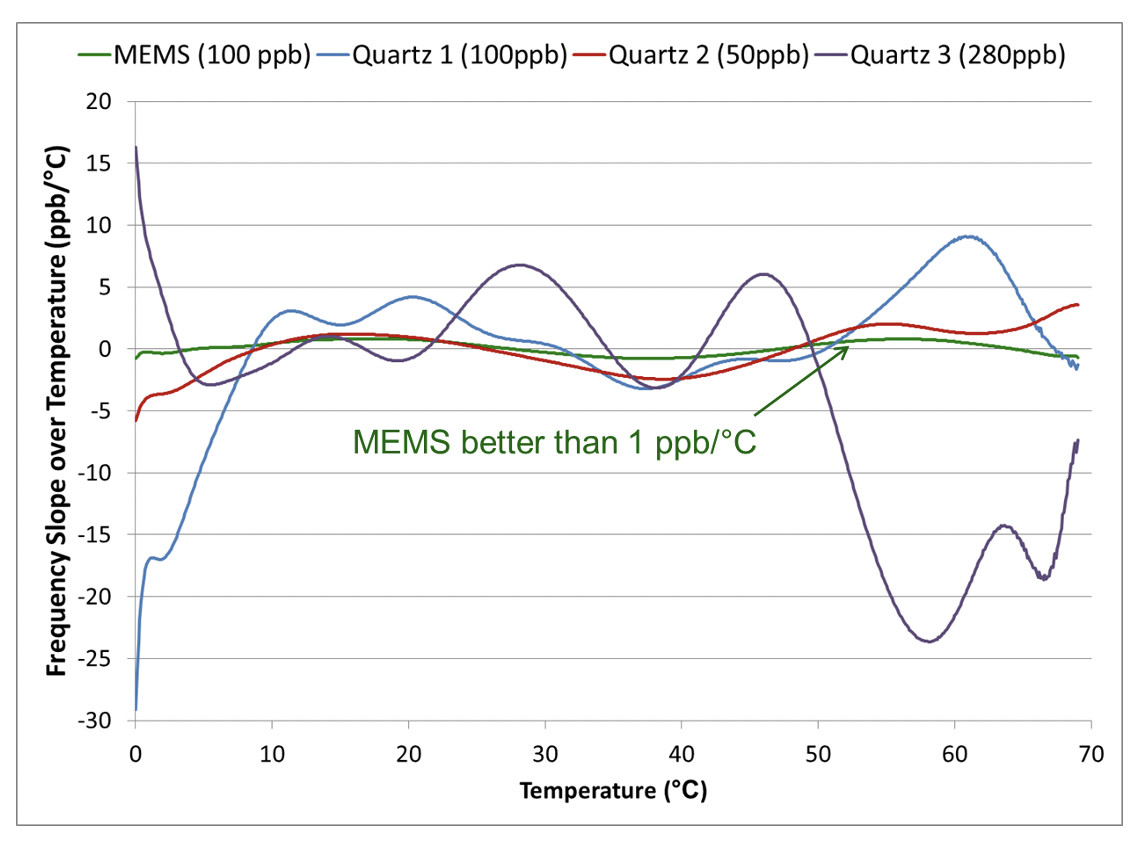 Figure 3: Comparison of frequency over temperature slope of the MEMS-based TCXO and three quartz-based TCXOs.

Many TCXOs cannot maintain the necessary performance under environmental stressors. One key metric where the MEMS TCXO outperforms comparable quartz devices is frequency over temperature slope. The frequency slope of an oscillator describes how the frequency will behave as the ambient temperature changes. Any sudden changes in frequency will correlate to a high frequency slope. In applications dependent on PTP, having a low frequency over temperature slope allows the TCXO to maintain an accurate reference between timing packets, even under fast temperature ramp. This allows a longer loop bandwidth, giving the IEEE 1588 algorithm more time to choose the packet from the highest-ranking clock available.

With just ±1 ppb/°C temperature slope, the MEMS TCXO ensures small and smooth changes in output frequency when the ambient temperature fluctuates. Under these harsh conditions, the precision TCXO delivers the same time accuracy as many larger and less reliable quartz OCXOs.

Figure 4: Block diagram illustrating the role of timing in the distributed unit.

The component of 5G ORAN with the most demanding timing requirement is the DU. As the gateway to the network core, it must maintain precisely synchronized time to pass down to the fronthaul switch and RRU. The OCXO must remain accurate even when placed near a fan or when the SoC emits heat under heavy load. In some networks, the fronthaul switch will also require an OCXO for additional stability. While in many aspects similar to a MEMS TCXO, a MEMS OCXO offers even better stability across temperature and under rapid temperature change. For example, MEMS technology combined with advances in thermal isolation of Emerald Platform OCXOs result in a frequency over temperature slope of just ±0.04 ppb/•C as shown in figure 5. 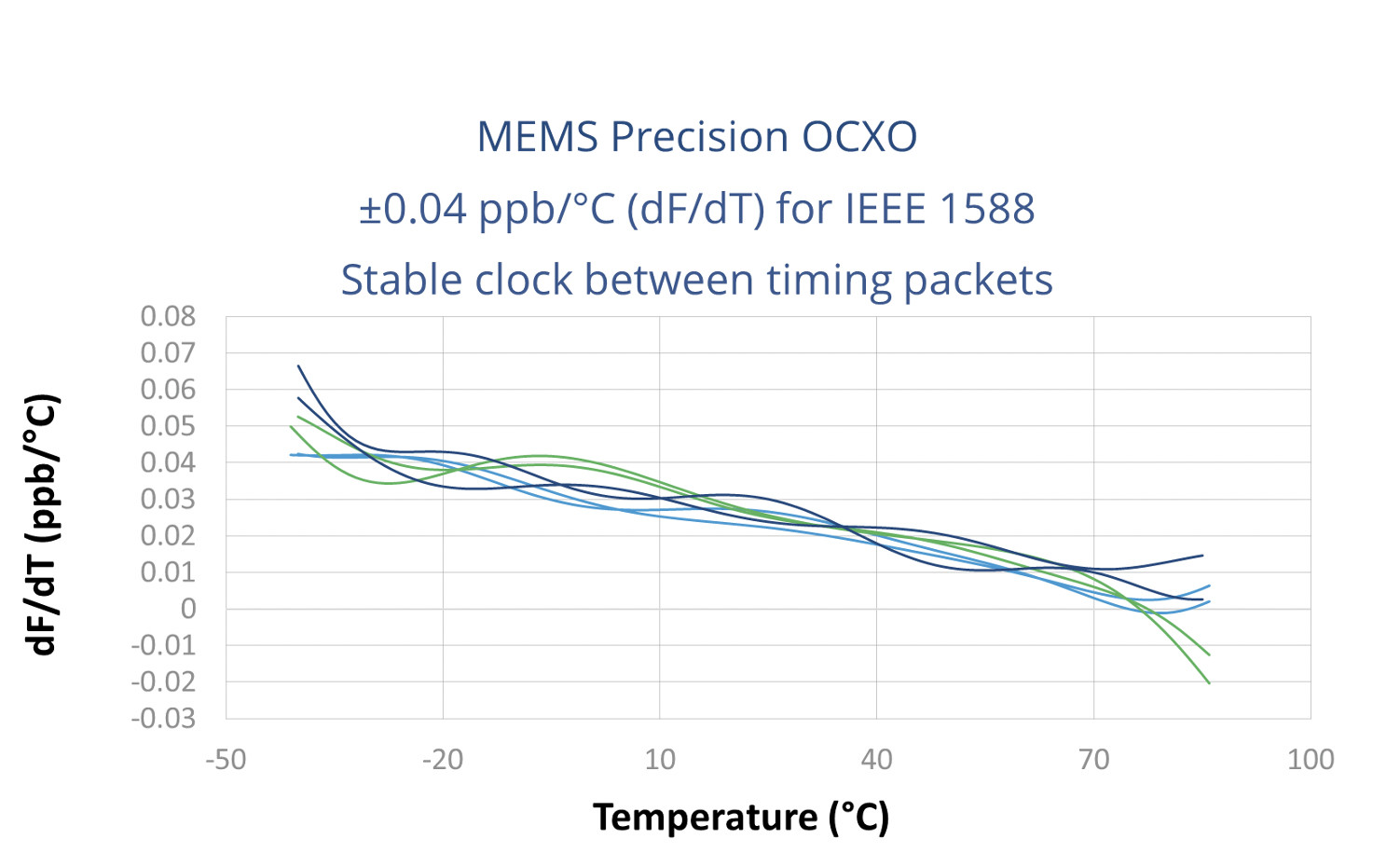 Figure 5: Frequency over temperature slope of a MEMS OCXO.

In addition to thermal stability, MEMS oscillators are engineered to maintain their performance under airflow. 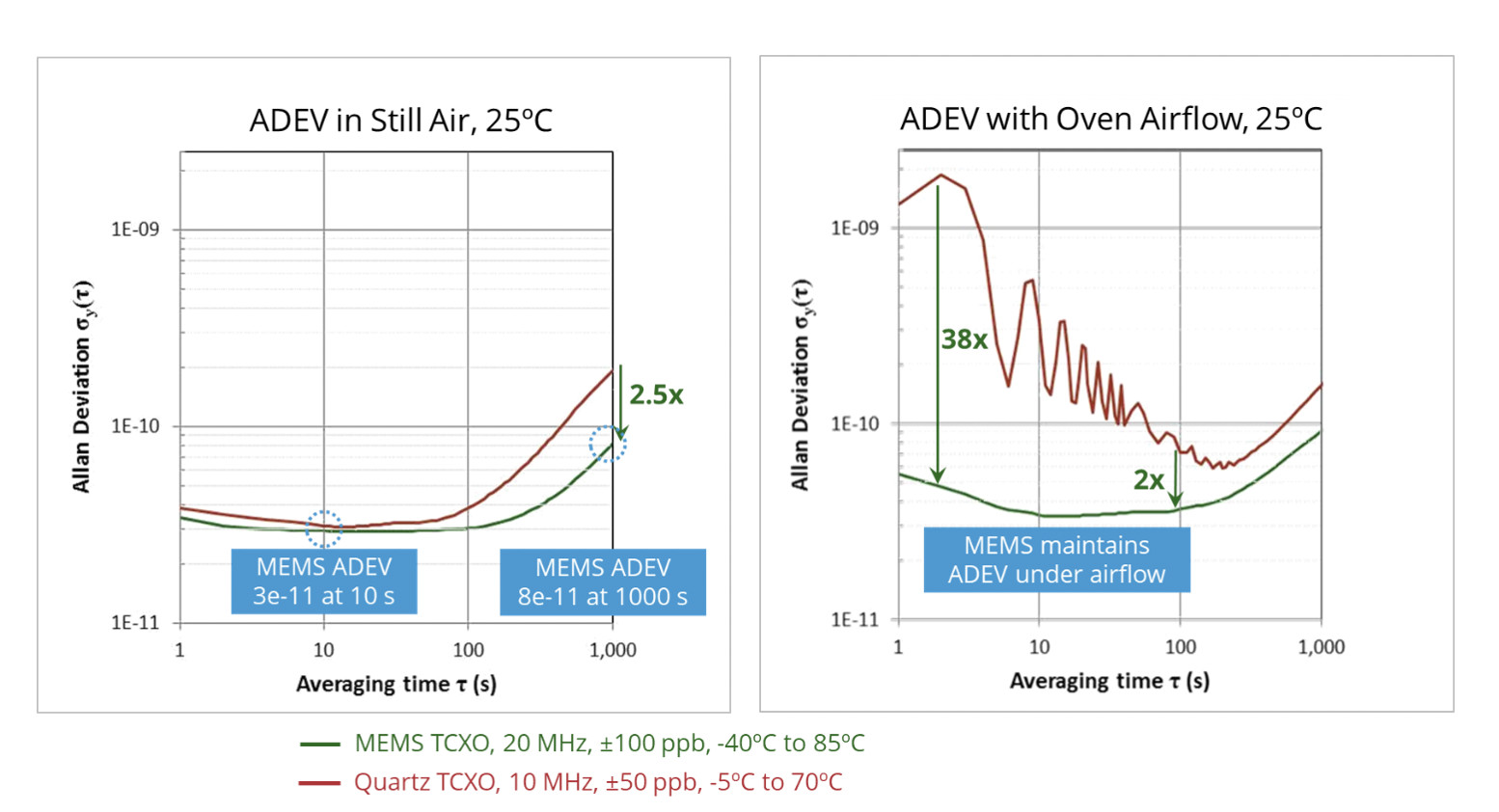 Figure 6: Comparison of Allan deviation (ADEV) of MEMS TCXO and quartz TCXO in still air and under airflow.

For example, under normal conditions, the MEMS TCXO has 2.5 times better Allan deviation (ADEV) than a comparable quartz TCXO after a 1000 second averaging time. When the devices are subjected to airflow, the MEMS TCXO has 38 times better ADEV at a 3 second averaging time. When placed in a pole mounted RRU or in a DU next to a fan, time error due to poor ADEV can cause delays in PTP packets and ultimately lead to data errors and loss of synchronization.

While dynamic performance is needed to get the most out of a PTP synchronized system, PTP can be combined with SyncE for the best overall performance. To enable SyncE, a new family of MEMS-based “clock SoCs” are available. These clocks integrate a MEMS resonator in the package. This results in eliminating activity dips and reliability issues associated with quartz devices.  Additionally, a network synchronizer, the most sophisticated of the clock SoCs, monitors input clocks for loss of lock and has an ultra-low one millihertz bandwidth leading to optimal wander. 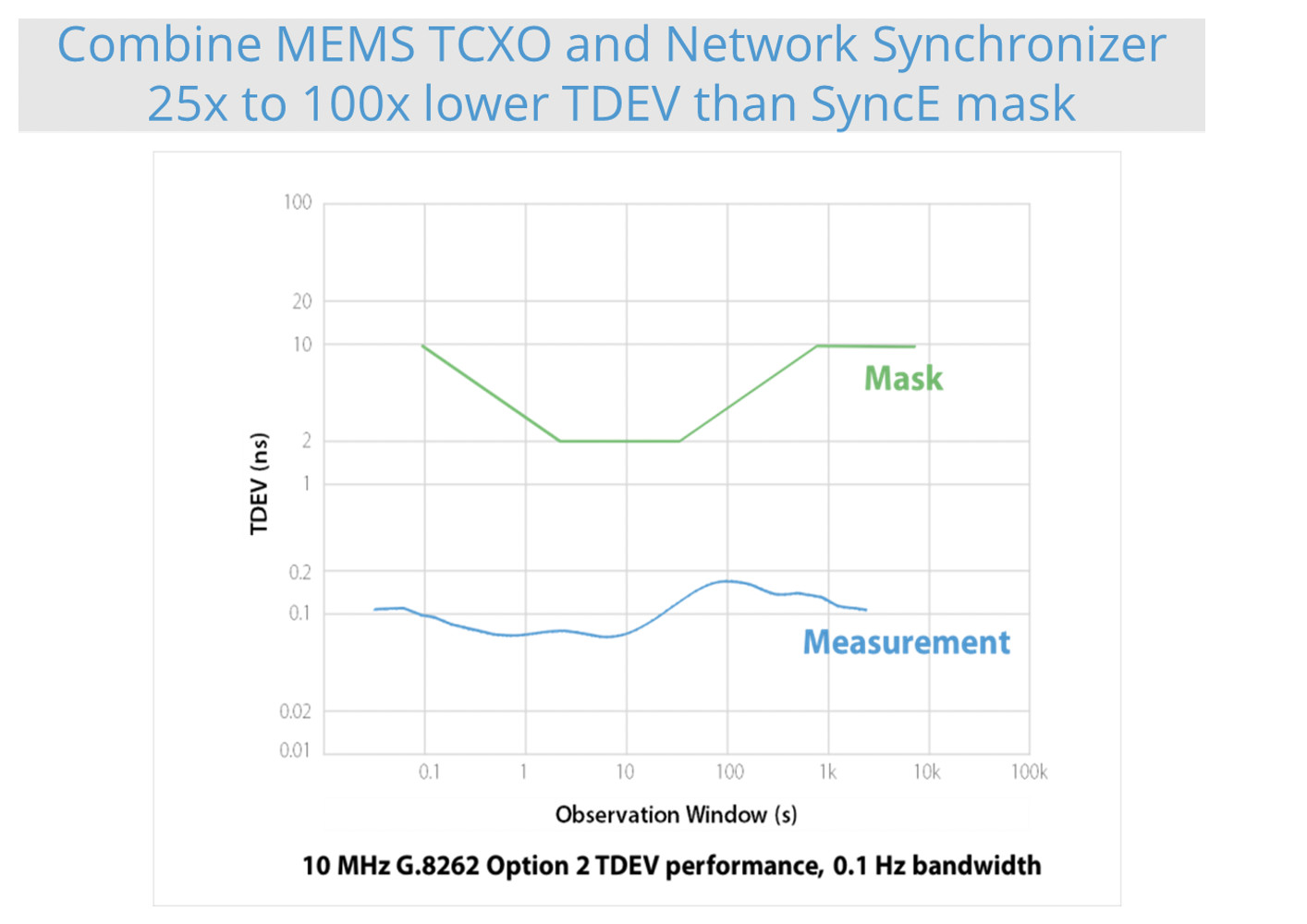 With the MEMS TCXO acting as the stability engine, the time deviation (TDEV) of the network synchronizer is 100 times better than the mask required for SyncE. With such a wide margin, designing the ORAN system becomes much easier as requirements for other components can be relaxed.

Both IEEE 1588 PTP and SyncE are cornerstones of 5G ORAN and using them together is essential to achieve the best system performance. As RRUs are subjected to harsh outdoor conditions, the dynamic performance of the MEMS TCXO and MEMS OCXO under fluctuating temperatures and airflow lead to less disruptions and service outages. Similarly, the ultra-low frequency over temperature slope translates to more accurate PTP time stamps. Finally, MEMS-based clock SoCs vastly outperform the wander requirements for SyncE while suppling all required clocks for the system. As networking development explodes around the world, the advantages of MEMS oscillators and clock SoCs deliver accurate, consistent, and resilient timing for 5G ORAN systems.