V2X interoperability: Why testing the connected car is a whole new ball game

It’s a foggy evening in the not-too-distant future, and you’re behind the wheel of your brand new car. There is still a steering wheel (this is only the near future, after all), but you’re...

It’s a foggy evening in the not-too-distant future, and you’re behind the wheel of your brand new car.

There is still a steering wheel (this is only the near future, after all), but you’re certainly happy you have Emergency Electronic Brake Light (EEBL) messaging to protect you in this foul weather. Not least when you have to brake heavily to avoid that idiot jumping the red light. And then…

The other driver is irate. Your EEBL obviously isn’t working, he says. You reply the car’s brand new and had a thousand-point check before you left the garage; the problem must be his. Besides, everybody knows his make of car is less reliable than yours.

Later, at home, you check online – and you’re not alone. Something about those two car brands, that weather, and a red light in an urban area just doesn’t seem to work together. The two manufacturers are blaming each other, but it barely matters – the reviews are clear: if you want to be safe, don’t buy either car.

Whichever prediction you listen to, it’s clear the connected car is going to be huge – and soon.

The U.S. Secretary of Transportation is proposing $3.9 billion of funding for autonomous vehicles, Elon Musk says cars will drive themselves coast to coast by 2018, and the US Department of Transportation (DoT) and National Highway Traffic Safety Administration (NHTSA) just updated a policy statement to allow for Level 4 automation (where even fallback functions are automated) within six months.

Whether for autonomous self-driving technologies and advanced driver assistance systems (ADAS), paying for fuel and tolls, or simply updating traffic information, the next generation of vehicles is going to have to exchange messages with a lot of different manufacturers’ systems.

That demands interoperability and, for automotive systems engineers, a whole new way of testing.

To date, automobile manufacturers and their suppliers have tended to build quality and testing regimes around setting, meeting, and policing their own internal standards – and they’ve become very good at this way of working. On the other hand, direct interoperability testing based on common messaging protocols – and where the potential fallout of any problems is shared – is uncharted territory.

But thankfully, it’s only uncharted in the automotive sector.

Other industries – most notably IT, but also communications – are already familiar with interoperability testing, and have effective working methods in place. Naturally, automotive engineers will want to adapt some aspects for their own needs, but the underlying principles apply.

The basic premise is relatively simple: to facilitate messaging interoperability, regulatory authorities in each geography establish a standard set of agreed upon protocols for all manufacturers to use. Manufacturers, in turn, then define suites of test cases that confirm that their system conforms to the relevant protocols for each territory.

In both the U.S. and E.U., regulatory bodies are already providing clear guidance around vehicle-to-everything (V2X) protocols. Although there is no legislation yet, the safety-critical nature of V2X interoperability makes it a likely addition in the near future.

In Europe, standards are set by ETSI, of which the most relevant is ITS-G5. In the U.S., the agreed protocol stack is Wireless Access in Vehicular Environments/Dedicated Short-Range Communications (WAVE/DSRC), and the U.S. DoT has put forward a certification framework covering V2X. So far, Asian standards seem set to follow the U.S. model. 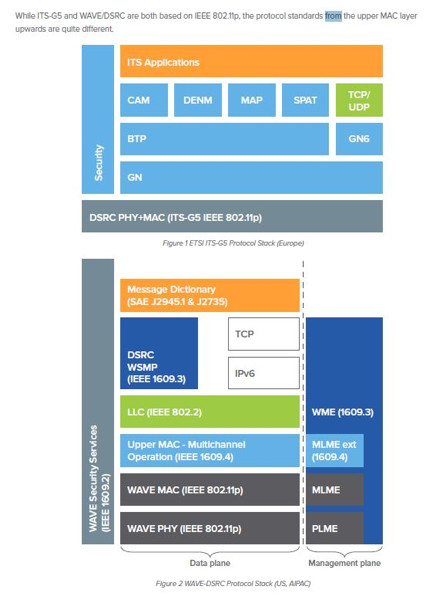 [Figure 1 | Shown here is the WAVE/DSRC protocol stack set to be implemented in the U.S. for V2X systems.]

Both ITS-G5 and WAVE/DSRC are based on the IEEE 802.11p Wi-Fi standard. In the future this could potentially expand to allow for a cellular physical layer – such as LTE-V or 5G – but it could be some time before acceptable levels of latency and performance are proven.

Ensuring interoperability is just one way that V2X development is pushing automotive manufacturers outside their comfort zone. Engineers will also have to wrangle an assortment of heterogeneous technologies, overcome growing signal interference, and, crucially, ensure security in the face of a growing hacking and spoofing threat – all while satisfying stringent performance and regulatory requirements.

But for those who can overcome the challenges, there is potentially a once-in-a-generation opportunity to move ahead of the competition and fundamentally redefine the relationship between car and driver. I can’t think of a more interesting or exciting time to work in this industry.