Many attempts before DIY perfection

About three years ago, I was introduced to something called a StrandBeest. This mechanism, which can be translated from Dutch as beach monster, involv...

About three years ago, I was introduced to something called a StrandBeest. This mechanism, which can be translated from Dutch as beach monster, involves a system of cranks and linkages, and can translate wind power into something resembling a giant walking creature. Naturally I had to have one, perhaps using electricity to power everything.

And thus began my journey trying to assemble a StrandBeest. I didn’t have a blueprint to go by, but its original creator, Theo Jansen, published the important information on the length of the device’s linkages. I put these linkages together on CAD (Draftsight), and began to cut the skeleton from wood strips. 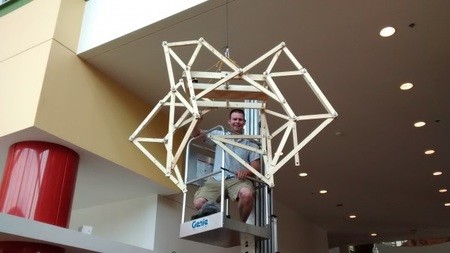 1. Partial Success at assembling a StrandBeest.

For this first ‘Beest, each leg required about 20 ft. of wood. I had to cut out each section by hand, including shaping some of them with a milling machine and putting holes in them for the PVC pivots. It was a lot of work.

Eventually I got the legs on this first device to turn, though it never was able to walk. The windshield wiper motors I used were way too fast, and the smaller motors that tried weren’t powerful enough. Also, four legs weren’t enough to allow it to balance correctly in that configuration. Still, it made a neat display at the 2014 Columbia, SC Maker Faire, and it was displayed at the museum for some time after. Not exactly what I’d envisioned since it never walked, but it made an interesting display. 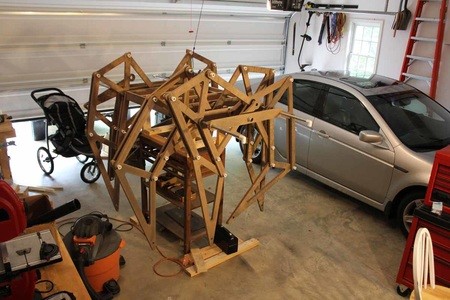 After that not-quite-success, I drew the machine more carefully, and had a machine shop cut this ‘Beest out of MDF on a water jet machine. This time I used eight legs instead of four. Using a machine shop certainly saved time, but assembling everything still took many hours. Although I attempted to use the larger windshield wiper motors from the previous ‘Beest, between the linkages binding, friction, and it being way too heavy, it was never able to walk on its own.

After making something nearly the size of a golf cart, I finally did what I should have done in the first place, and made a small prototype. Cut out on my CNC router from cheap and light foam-filled wood product, it stood well under a foot tall, and was held together with hot glue. I used a partially broken quadcopter as the “brains,”, which, when used with gear reduced motors, was able to turn all of the legs.

After a few modifications, I eventually got the StrandMaus—translated as beach mouse because of its small size—to walk. Unfortunately, hot glue isn’t really up to the task of holding a robot together, so eventually it became a non-functional ‘maus. 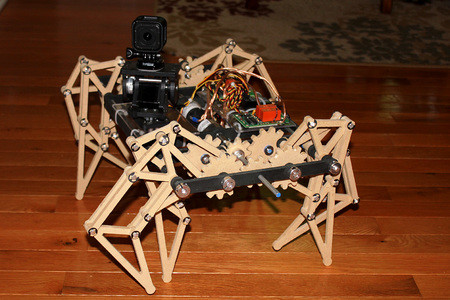 After nearly three years, and much experimentation, I finally was able to make a StrandMaus that worked quite well. The previous ‘Maus design was scaled up to accommodate larger connecting and driving rods (1/4-in. diameter), and thrust bearings were used to reduce friction. In addition, a system of gears inspired by this German model was employed to simplify the power transmission system.

I took many ideas from previous builds: like the GoPro mount and electronics setup from attempt 1, the concept of eight legs from attempt 2, and some other details from attempt 3. In the end, the build is really great, and it looks like it’ll last for a long time. Whether this build is an end in itself, or it leads to something even cooler, only time will tell.