When users want to create embedded video or imaging applications, they find that PC/104 boards and systems are the right choice for their designs, and...

When users want to create embedded video or imaging applications, they find that PC/104 boards and systems are the right choice for their designs, and plenty of products are still being introduced that meet this venerable and proven specification. The reasons are well known. PC/104 provides a compact yet easily expandable architecture. It is suitable for harsh environments where imaging applications may be needed, thanks to its rugged and reliable connectors. It is resistant to shock and vibration, which can be important for imaging. And of course, it’s compatible with PCs, keeping the cost and time involved in development down.

In particular, PCIe/104 offers flexibility for functions an imaging application may need, such as four-port Gigabit Ethernet and USB 3.0 connections. And it maintains flexibility for future expansion. One recent example of a vision system that took advantage of PCIe/104 was a fish-counting system developed for the National Marine Fisheries service by PC/104 Consortium members ADL Embedded Solutions Inc. and RTD Inc. The service needed a camera system that could withstand the vibrations of a trawler in the water while providing real-time image processing.

Several companies have products that are compatible with the PCIe/104 standard. For example, if you’re needs include ultra-low latency, you might want to check out the H264-HD-2SDI from Advanced Micro Peripherals (Ely, UK), a dual-channel H.264 encoder for PC104 OneBank. It features ultra-low latency of 40 ms and provides Key-Length-Value metadata. It offers high definition, allowing dual-channel encode up to 1080p30 and single-channel encode up to 1080p60. The board is designed for high-resolution surveillance and traffic monitoring, and can be used in unmanned aerial vehicles and remotely guided vehicles. 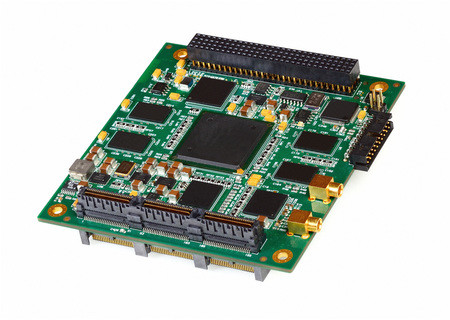 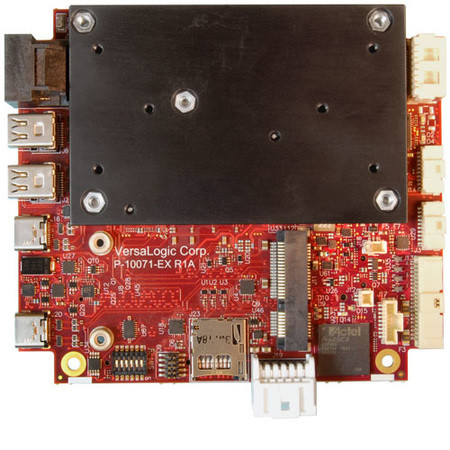 The Coaxlink Duo PCIe/104 from Euresys (Liége, Belgium) is a ruggedized, stackable, PCIe/104-compliant card that provides two CoaXPress CXP-6 camera connections and a PCIe 2.0 (Gen 2) x4 bus. It has an extended temperature range of -40 to +85°C with conduction cooling. It features a ruggedized COTS board and relies on the CoaXPress standard to provide a high-speed interface between the camera and the frame grabber. In its simplest form, CoaXPress uses a single coaxial cable to transmit data at up to 625 MB/s, simultaneously transmitting control data and triggers and providing up to 13W of power to the camera. The company’s CoaXPress outdoor cameras are designed for demanding applications in defense and high-end surveillance applications. 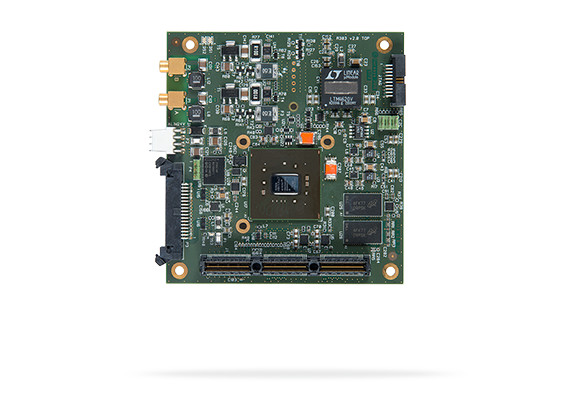 The oi110 dual camera link from Sundance Technology (Buckinghamshire, UK) combines a dual-lane CameraLink camera interface card and the EMC²-DP PCIe/104 OneBank carrier card on a PC/104 form-factor. The combination provides a dual-vision interface to a range of applications and can be controlled by a host controller or run in stand-alone mode. The integrated Xilinx FPGA lets any CameraLink format be connected to it, and additional SATA-3 expansions allow connection to large storage for future processing. It is compatible with PCIe/104 OneBank, Type 1, or Type 2, as well as PCI Express Gen 2, and can integrate a PCI Express switch. It supports power over CameraLink and operates at a data rate up to 85 MHz. 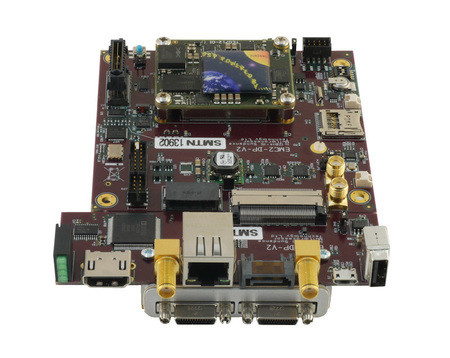 For even greater performance, Sundance’s oi115 combines HDMI In/Out module and the EMC²-DP carrier card. It can be coupled with the user’s choice of FPGA module, suiting the particular application. It includes the FMC-IMAGEON HDMI I/O FMC module, provides an interface for ON Semiconductor VITA image sensor modules, and has a video clock synthesizer. It acts as a PCIe/104 OneBank carrier for Trenz SoC modules. It is compatible with PCI Express Gen 2 and can integrate a PCI Express switch, and includes a cable-less breakout PCB connector. 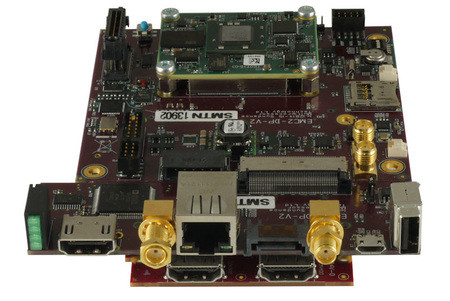 If your needs include standard or high-definition video, you may want to check out the oi111 from Sundance. It’s an air-cooled PCIe/104 OneBank and used for standard-definition and high-definition video processing in combination with I/O and control applications. The front panel contains two HD-BNC connectors as primary video interface and a high-density connector for secondary video and I/O interfaces. It supports SDI digital video and PAL\NTSC analog video, with different order options for the specific primary and secondary video configurations. The -AD option has an analog video input and a SDI video output on the two front panel HD-BNC connectors, allowing SD to HD up-scaling, combined with user specific video processing. The high-density connector provides RS422, RS485, CAN and discrete I/O interfaces. 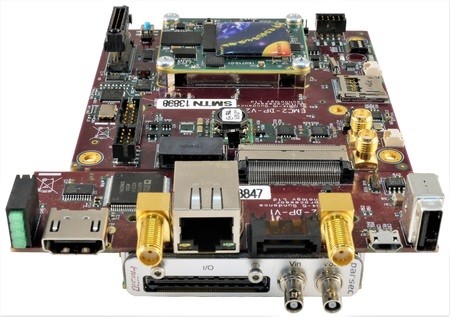 Hot or cold is no issue

The SK220, a PCIe/104 carrier module from Perfectron (New Tapei City, Taiwan) can is offer up to six independent displays by MXM interface under extended temperature from -40°C to ~ 85°C. It is equipped with 6 x miniDP, 1 x VGA (2 x 5 pin header) which can support most MXM graphic cards from NVIDIA and AMD. It can switch the signals between FPE connectors via dip switch, making it useful for multi-graphic processors in demand applications such as a mission control room, or in 19-inch rack-mount multi-node rugged servers. It uses PCIe x16 and PCIe x4, x1 link. It provides support for MXM 3.0 and 3.1 and Type A and Type B graphics cards. 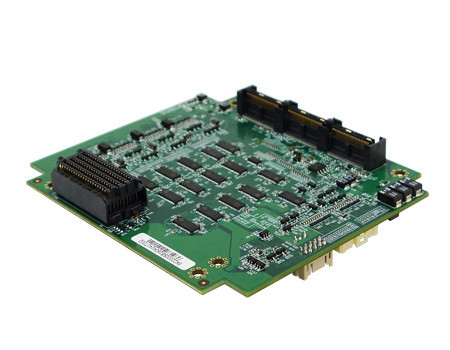 If multiple displays are required, the SK210-GT730M from Perfectron should suit your needs. It’s a high-end PCIe/104 graphic module featuring a NVIDIA GPU GT730M, which provides GPU clock up to 719 MHz. It has CUDA 384 cores and supports four independent display ports output–up to three at full 1080P HD. Equipped with 1024 MB of DDR3 memory and a 64-bit memory interface, it can provide advanced graphic computing for multi-display, high-end graphic applications such as central room signage, high-end digital signage, navigation, defense and more. It uses PCIe x8 and x4 links, and supports OpenGL 4.4, OCL 1.1, and Microsoft DirectX 11. 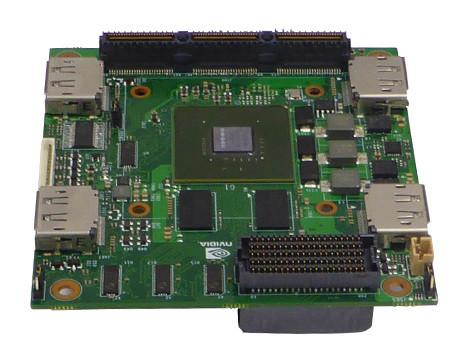 Connect Tech’s Xtreme/GPU provides desktop-level graphics, multimedia features, and GPU processing power in a PCIe/104 form factor, and gives users the ability to select either AMD or NVIDIA graphics. The AMD version can drive up to four Mini DisplayPort connections for independent use, or it can work with AMD Eyefinity technology as a single large surface. On-board passive circuitry allows for the use of Dual-Mode DisplayPort, enabling the use of DVI or HDMI dongles. The NVIDIA version gives the GPU access to NVIDIA CUDA cores, turning it into a parallel computational CPU for non-graphical applications. It is compatible with PCIe x1 up or down stack and x16 down stack, with x16 up stack optionally available. It supports OpenGL/OpenCL and Microsoft DirectX 11. 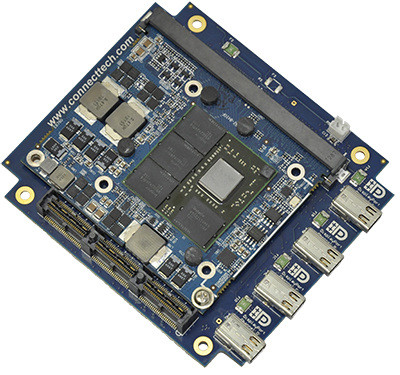 The Model 953-ET encoder/decoder from Sensoray (Tigard, OR) is a PCIe/104 full duplex audio/video codec that can simultaneously capture four analog video and four stereo audio inputs. Each of its four identical channels captures NTSC/PAL video at up to full frame rate and encodes it to H.264, MJPEG, or MPEG-4, while capturing and encoding audio to G.711 or AAC. In addition, a low-latency uncompressed video stream is available for high performance previewing on the host computer. Several stream formats are supported: MPEG-TS, MP4, AVI, and elementary. Each channel can also receive streams from the host, decode compressed streams and output the resulting analog audio/video. Overlay generators can position up to 160 characters of text anywhere in the video frame. 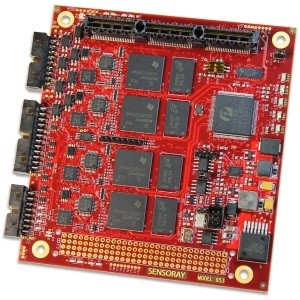 Frame grabbers must adhere to lots of standards, and that’s just the case with the Model 911 frame grabber from Sensoray. It’s a PCI/104-Express board that simultaneously captures four channels of analog video and four channels of stereo audio. It captures raw video frames from each channel at up to full frame rate, resulting in an aggregate frame capture rate of up to 120 fps for NTSC and 100 fps for PAL. The high capture rate and a high-performance bus interface, makes it useable for applications that require capturing of multiple video sources in a compact form factor. Each video input may be connected to a composite or S-video source. Supported video capture resolutions include D1, VGA, QVGA, QQVGA, SIF, 2SIF, 4SIF, CIF, QCIF, SQCIF, and 4CIF. Captured frames are formatted as raw RGB or YUV. 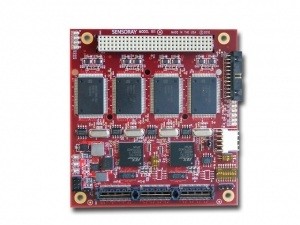