Collaboration is the key to IoT innovation

With the ARM TechCon taking place this week, there are interesting IoT industry issues being discussed to enable industry growth. Softbank stated they...

With the ARM TechCon taking place this week, there are interesting IoT industry issues being discussed to enable industry growth. Softbank stated they expect 1 trillion chips annually within 20 years, again illustrating the investment dollars preceding the gigantic forecasts of the future. With that said, how can we really get to trillions of connected devices? Innovation will come from all corners of the globe from startups to well-entrenched players, and the industry itself must create a culture of collaboration to facilitate opportunities to produce meaningful IoT products and services.

However, I think it’s worth discussing the ecosystem, community, and collaboration, because depending who you are reading or speaking with, the ecosystem itself is defined by their myopic view of the IoT value chain or technology stack. Steve Case’s book, The Third Wave: An Entrepreneur’s Vision of the Future, discusses this recent wave of development – that is, that the Internet of Everything will look more like the first wave of Internet proliferation, an area in which he gained plenty of strong experience during his tremendous ride at the helm of AOL. He speaks of the three Cs – content, context, and community ­– as fundamental, along with the three Ps ­– partnerships, policy, and perseverance.

We are witnessing a bonanza of technologies, platforms, and partnerships forming at a dizzying rate, yet I believe we can expand these definitions. Brian Fuller’s article, How Do We get to 1 Trillion Devices? , illustrates how ARM CEO Simon Segars recognized the growth of IoT developers scaling from 800,000 to 4.5 million and the need to provide hardware that is easy to build, maintain, power, and have the necessary security attributes. I applaud the fact he is enabling, as best as possible, the expansion of IoT. The reality is, the app developer community is so decentralized that it is very difficult to get an actual number, but I have done my research and ARM forecasts exceed that as of late.

In the IoT space, there is a growing notion that developers and designers will be its most critical group of stakeholders in the future, stemming from fact that they created the digital applications that have been the driving force behind the growth of mobile in the past years. The grass-roots style, distinctly speculative innovation has fundamentally been what has brought the needed content into mobile devices, and my assertion is that similar growth-from-the-long-tail phenomenon will take place in the emergent IoT space as well. Currently, developers surpassed 1.7 million in 2014, and are suspected to surpass 3 million by 2019; this would account for approximately 10 percent of all software developers. Thus, you have 1 million hardware designers and 3 million software developers forecasted by 2019/2020, and that community must be served in order to drive innovation.

That developer community needs a place to communicate and congregate digitally. They need to see new things, foster new ideas, and experiment. I believe great innovation stems from grand mashups that allow ideas to build upon each other, but that grand mashup needs a place to collide and create that fusion. The industry must come to grips that our modern concept of distribution or marketplaces is not enough – they cannot keep up with the variety and velocity of sensor innovation. Developers need a forum where they can both exchange ideas and see new sensors to spur those great ideas.

A dozen manufacturers currently dominate the sensor distribution scene, driven mainly by the adoption of the mobile phone over the past decade. The MEMS sensor dynamics over the past decade illustrate that major players have dominated the few high volume markets (short tail), but the thousands of innovative small sensor companies will create new markets with emerging technologies (long tail). Distributors have traditionally featured these larger sensor manufacturers and serviced the traditional corporate OEM marketplace. The community and expanded ecosystem need stems from the convergence of the long tail sensor and emerging technologies, new packaging variations, variety, and velocity of manufacturers colliding with one million designers and millions of developers. The traditional distributor model cannot accommodate ever-changing manufacturer innovations and millions of independent innovators looking for quality information. 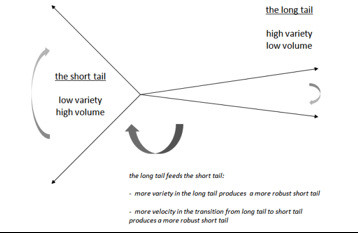 The MEMS sensor market is growing twice the rate of semiconductors at roughly $12 billion to forecasts of $1 trillion by 2019 according to Cisco, led by increased mobile adoption and the commoditization of novel sensor technology.

It is further forecasted that globally tens of trillions of sensors will be in the market within 15 years, in a watershed moment leading to big data, cognitive computing, and artificial intelligence. MEMS sensor components are the unsung heroes of many of our favorite and beloved technologies and are the driver of these smart systems. There is strong fluctuation among sensor manufacturer market leaders and innovators at a dizzying pace such that the long tail of manufacturers will drive true sensor innovation.

Just try a Google news alert for sensors or MEMs and see the countless stories about innovation coming from FABs, university research labs and cutting-edge organizations. This reinforces Chris Anderson’s book, The Long Tail: Why the Future of Business is Selling Less of More, and that the job for us as an industry is to facilitate that innovation. The grand IoT community mashup will, in all likelihood, be from some startup of business application mashed from a sensor startup. While marketplaces can feature all the products and scale, they do not allow for true developer collaboration and iteration as it stands today. A hybrid or alternative approach is needed.

Collaboration must allow for a free and open communication, and certain organizations should allow for more open source development. We need to expand our view about collaboration to include algorithms and data as well. Simplistic algorithms can be shared without fear of losing intellectual property if it propels the industry forward. In addition, sensor data can be shared if certain safeguards are adhered to and personal data protected.

What manufacturers need is raw sensor data to refine their algorithms in a continuous feedback loop. I am seeing certain visionary companies surfacing that will provide algorithms and data. Large data sets are meta-tagged and scrubbed that might be unrelated to one’s company strict definition of sensor data or business application, but may lead to sensor fusion and new levels of understanding.

IoT is breaking down traditional business paradigms. We must also break our traditional definitions of ecosystem, community, and collaboration. This type of communication and sharing will pay dividends for all players in the industry and unlock the value of connected devices, data, and information.

Dan Yarmoluk is an IoT Business Development Executive for ATEK’s AssetScan. Dan has a technical background in OEM product design with batteries, chargers, and sensors.