CES 2017: Microchip makes moves toward coexistence of MOST and Automotive Ethernet

The in-vehicle networking landscape is shifting as Automotive-grade Ethernet enters the picture, but that doesn't mean that incumbent communications t...

The in-vehicle networking landscape is shifting as Automotive-grade Ethernet enters the picture, but that doesn’t mean that incumbent communications technologies will go quietly – if at all. For example, the Media Oriented System Transport (MOST) family of specifications has been widely deployed in roughly 250 vehicle models for the better part of two decades, and even in the face of new designs that incorporate Automotive Ethernet, the MOST protocol’s utility as a high-speed, synchronous multimedia network for applications such as infotainment make a strong case for the technology to be used well into the future.

However, realizing the possibility of heterogeneous vehicle network environments, engineers at Microchip’s CES 2017 booth prepared an implementation of MOST-to-Ethernet Audio-Video Bridging (AVB). With Ethernet AVB extension a portion of the available Ethernet bandwidth is reserved for audio and video traffic, and the Microchip demonstration showed how MOST traffic could be encapsulated in packets and transported over Ethernet AVB, as well as the possibility of the reverse. The system consisted of the 300 MHz SAMV71 microcontroller (MCU) that was responsible for controlling audio-video synchronization across all of the devices involved, switches, as well as a set of intelligent network interface controllers (INICs) that were used to minimize latency between an audio source and destination (which could be one or many, as with an in-car stereo system). 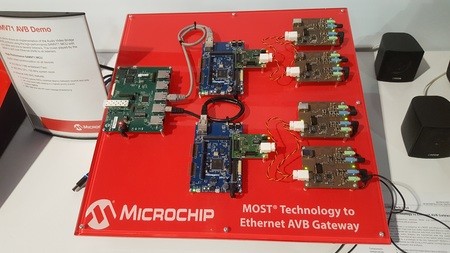 Outside of the Microchip hardware present in the demonstration, the advent of MOST150 in 2007 provided a physical layer for Ethernet implementations and appears to have shown a great deal of foresight as Ethernet continues to consume wired networking applications in areas outside of core network infrastructure. The implications here for the connected car are not insignificant, either, as MOST’s ability to coexist with a technology capable of carrying IP packets will allow for more seamless integration of data entering and exiting vehicles for the cloud.

As a leader in both Automotive Ethernet and MOST technology, that fact would seem to have Microchip well positioned in automotive networking moving forward.