The open source movement has had a profound impact on the tech sector over the last two decades, and now those notions are moving beyond software and...

The open source movement has had a profound impact on the tech sector over the last two decades, and now those notions are moving beyond software and operating systems to form the basis for flexible yet standardized complete systems – including automobiles.

At the ARM booth at CES 2017, Pierre Delaigue, a project manager at Renault Innovation in Silicon Valley showcased POM, an open source variant of the company’s Twizy electric vehicle that reflects a move towards open architectures in the automotive industry. With POM, Renault and its partners ARM and OSVehicle have published the hardware and software components of Twizy to enable smaller companies to innovate on top of a standard functional baseline and configure the car based on particular needs. For example, with access to vehicle data now available through ARM interfaces, developers can now create new applications as well as customize physical elements of the POM by changing the engine, battery, and so on. One use case described was that of a pizza delivery company, where, through the use of vehicle data and a companion app, Delaigue was able to set certain vehicle parameters such as maximum speed and monitor other data corresponding to the POM and its driver. 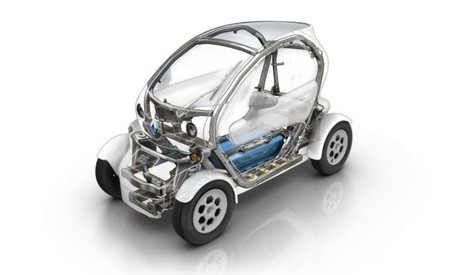 According to Delaigue, with roughly 10,000 Twizys shipping over the last three to four years, Renault recognized that users had already begun “modifying and tinkering with the Twizy without them,” and that this new initiative with POM gives them an opportunity to get ahead of the curve. It would appear this is another case of “if you can’t beat ‘em, join ‘em” in the world of open source.

For ARM’s part, the Twizy is another proof point of the IP vendor’s success in the automotive space, as countless ARM-based processors in the POM/Twizy are controlled by seven or eight electronic control units (ECUs) that also use ARM IP. While ARM is already well established industry-wide in vehicle infotainment systems, Richard York, Vice President of Embedded Marketing at ARM says that the next area of emphasis will be in the power train of electric, hybrid, and conventional/diesel vehicles. Here the company is already seeing significant interest in its ARMv8-R architecture, which should start hitting the streets in power trains in the 2020 time frame. Given the heritage of these processors in functional safety applications such as motor control, as well as the recent expansion of TrustZone extensions throughout much of the ARM IP portfolio (including into Cortex-M-class microcontrollers (MCUs)) that will enable auto manufacturers to eliminate many discrete trusted platform module (TPM) security chips, York is optimistic that ARM automotive is headed for the driver’s seat.