In the early 2000s, if you wanted to develop a hobby robot, many students and experimenters turned to the BASIC Stamp line of microcontrollers, which...

In the early 2000s, if you wanted to develop a hobby robot, many students and experimenters turned to the BASIC Stamp line of microcontrollers, which cost about $100. This can be a big expense for someone who doesn’t yet have a “real job.” Personally, after getting to use one in college, it wasn’t easy for me to get one myself (I did eventually get one for use with this robot), but if they were priced much lower, I could have simply purchased one without thinking about it that much. 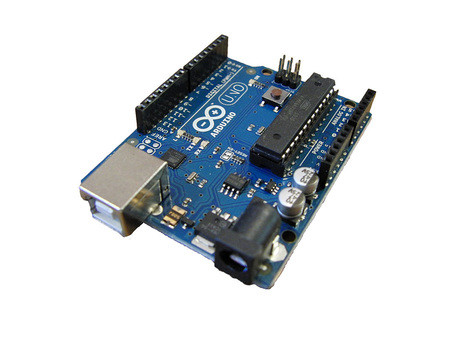 [Image derivative work of Creative Tools by JotaCartas, CC BY 2.0, via Wikimedia Commons.]

Fifteen or so years later, and Arduino boards have helped fuel the Maker movement, with development platforms that can be purchased in the $25 or less range. In this series of posts, I’ll be going over a few different flavors of these boards, and their advantages and disadvantages. The Arduino Uno seems to be the standard, and what you would probably start with today if you wanted to start experimenting with microcontrollers and robotics. I’ll go over that board here and talk about others in posts to follow.

The Arduino Uno uses an ATmega328P microcontroller for processing, and can be powered by between 6 and 20 volts (DC), though it’s recommended that you stay between 7 and 12. It has 14 I/O pins, 6 of which can be used for pulse width modulation (PWM) output. Additionally, it has 6 analog input pins.

It’s programmed using the Arduino IDE — available on Windows, MacOS, Linux, or via a web app — using using a standard USB cable. If you get one of these boards and want to jump into programming it, the device has an onboard light on pin 13. You can simply program the light to blink on and off for a great first program, or as a useful diagnostic tool once you’re more familiar with the system.

In my view, this board is kind of the standard for hackers and MakerPros. The biggest upside in my opinion is that it’s easy to get started with one, and there is a huge amount of resources out there to help you along the way. In fact, searching Google for “getting started with Arduino” yields 553,000 results as of this writing. 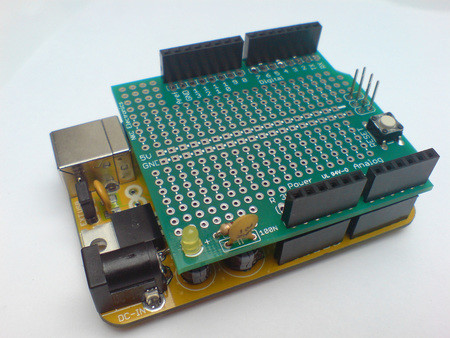 The other big advantage for more advanced users is the number of shields — expansion boards that plug into the development board—that are available. For example, if you want to control various types of motors, there is a ready-made shield for that. This kind of functionality has led some hackers to use it as a sub-controller in a larger control scheme. For example, another Arduino board, Raspberry Pi, or similar offloads certain control tasks to one or more Unos, taking advantage of their processing power and ready-made shields to take care of a small aspect of the project (power a servo, for example).

On the other hand, compared to other development boards out there, its clock speed of 16 MHz isn’t spectacular. This likely won’t be an issue for a robot that, say waters a plant every two days, but in some more involved control schemes, this might present some difficulty. Along the same lines, the 32KB memory isn’t a lot of space, but again, it depends on your application.

Also, there’s no built-in WiFi or Bluetooth connection, but these can be added on as needed. Although some aspects may seem outdated, in many ways the Uno is what started the idea that people could make amazing things at a reasonable price. You can get one of these boards for around $25, or well under if you’re willing to purchase a clone, of which there are many.

You can find more detailed information on the Arduino Nano and other Arduino-based development boards on the Development Kit Selector, sponsored by Digi-Key.