The foundation for Industry 4.0 that enables everything from real-time sensing to predictive analytics is actionable data. Therefore, logging data continuously and reliably is critical.

The ability to minimize downtime is an important factor in managing industrial facilities. Downtime is currently difficult to predict and extremely expensive. For example, downtime in a typical automotive manufacturing facility can cost up to $22,000 per minute or $1.3M per hour, according to Advanced Technology Services' 2006 “Downtime Costs Auto Industry 22K/minute: Survey”.

With the advent of Industry 4.0, factories are growing smarter and more connected. Machines in smart factories will be able to predict a failure before it occurs, using real-time data from connected wireless sensor nodes. They can then inform the control system to take corrective action to avoid unplanned system downtime. Accumulated data can then be used to refine the predictive analytics and enable better preventive maintenance of the machines. These advancements are targeted to improve operational efficiency of factories and reduce overall downtime.

The foundation for Industry 4.0 that enables everything from real-time sensing to predictive analytics is actionable data. Therefore, logging data continuously and reliably is critical, especially when failures occur since this is often crucial information. Furthermore, the amount of data that must be recorded is expected to continue to increase. Continuous data acquisition is required not just at legacy industrial systems, but at thousands of connected sensor-nodes that will become ubiquitous in the smart factories of tomorrow.

To overcome these challenges, next-generation industrial systems need high-performance non-volatile memories that ensure "zero data at risk" and reliable data-backup both during both normal operation and during system failures. To be reliable for this type of data logging, non-volatile memories for Industrial 4.0 will need to support fast write times, instant non-volatility, and virtually unlimited read/write endurance on the order of 100-trillion cycles. 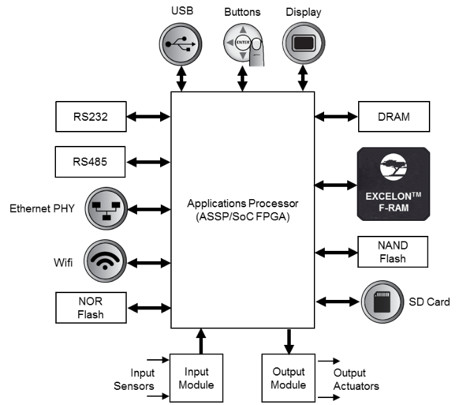 The programmable logic controller (PLC), used for industrial automation, is a common example of an industrial control system. In a PLC, real-time system data, captured by non-volatile data logging memory, can be used to detect and repair failures, as well as prevent failures from occurring in the future. Additionally, the non-volatile data logging memory captures the last system state before power loss. This data is critical to ensure that the PLC and all connected machines restart in a safe mode of operation when power is restored. Without this capability, there is potential risk to other machines, and to human safety in the immediate surroundings. Wireless IoT sensor nodes are the eyes and ears of smart factories. As discussed previously, sensor nodes can continuously monitor system and environmental parameters, then inform the connected machines or the control system to take corrective action when required.

Wireless IoT sensor nodes poses challenges different from industrial control systems. Sensor nodes have ultra-small form factors. In addition, they are often located ubiquitously in smart factories, including locations that are remote or difficult to access. Thus, they are typically powered by batteries or through energy harvesting.

For these reasons, sensor nodes require ultra-small foot print non-volatile memories that can continuously log real-time system data. They must be able to do this reliably over the entire lifetime of the sensor node, and at the lowest possible power consumption. For example, the Excelon-LP from Cypress comes in a small ~10mm2 GQFN package option. It also provides multiple power saving modes – including hibernate, deep power-down, and standby – so developers can maximize battery life.

To further reduce the form factor of wireless IoT sensor nodes, a single-chip approach for both code storage and data logging can be implemented using a non-volatile memory. In a sensor node, the size of the code required to measure and collect data is typically small compared to the amount of memory required to store the data. Therefore, having a separate code memory may result in under-utilization of the memory, and a single-chip approach will be more efficient.

The key challenge however, is having a non-volatile data logging memory flexible enough to partition the memory for code and data per the application needs. For the memory used for code storage, it is critical to ensure the system cannot accidentally write to an area of the memory that is being used for executable code. Thus, to meet the requirements of a single-chip approach, non-volatile data logging memory needs to implement memory protection features. For example, block protection prevents inadvertent writes to a range of addresses defined by developers. This enables the same memory to store and protect code while supporting real-time data logging.

Key to enabling non-volatile data logging memory is ferroelectric technology. Ferroelectric technology allows the combination of the high performance and byte-addressability of RAM with non-volatile data storage. Ferroelectric technology, as it is used Excelon non-volatile memories, has a memory cell that uses a thin film of lead zirconate titanate (PZT). The central atom in the PZT crystal changes position when an electric field is applied. The two positions of the central atom are used as binary states for the memory to store one bit. When power is interrupted, the atom’s position is retained, protecting the data. Data reliability is high as well: data can be retained securely for 100 years without any power backup.

Non-volatile data logging memory is highly efficient. It consumes 200X less energy than serial EEPROM and 3,000X less energy than NOR Flash. The technology also provides high data-reliability with a read/write endurance of 100-trillion (1014) cycles. In comparison, floating gate technologies like Flash and EEPROM wear out in as few as 106 cycles. This makes them unsuitable for frequent system data-capture.

Vijay Ramakrishnan works as a Product Marketing Engineer II in the Memory Products Division at Cypress Semiconductor. Vijay holds a MS in Electrical and Computer Engineering from Georgia Institute of Technology, and a B.Tech in Electrical Engineering from National Institute of Technology Karnataka (NITK) in Surathkal, India. His interests lie at the intersection of hardware, software and AI, with a focus on Industry 4.0 and IoT.

I have 4.5 years of experience across product management, product marketing and NPI in the high tech industry. I have previously led teams to define, develop and launch two products with a combined revenue potential of $35M/year. I have a MS in Electrical & Computer Engineering and a Graduate Certificate in Management of Technology from Georgia Tech. I have co-invented 2 granted US patents and authored several technical articles. I am passionate about IoT, Consumer products, Autonomous driving