Bluetooth 5 and Bluetooth mesh: Enabling use cases for Industry 4.0

The features provided by Bluetooth 5 and Bluetooth mesh will enable a host of new use cases, some of which are of specifically relevant to Industrial IoT (IIoT) applications.

In December 2016, the Bluetooth Special Interest Group (SIG) rolled out Bluetooth 5, the latest version of the Bluetooth core specification. This fifth revision included a number of groundbreaking enhancements. In June of last year, the SIG released the spec for Bluetooth mesh, which is a software enhancement that can run on any Bluetooth Low Energy (LE) solution; it does not require Bluetooth 5.

The features provided by Bluetooth 5 and Bluetooth mesh are the most substantial enhancements to Bluetooth technology since its introduction in 1998. They will enable a host of new use cases, some of which are of specifically relevant to Industrial IoT (IIoT) applications.

Bluetooth 5 provides three main feature improvements compared to the preceding release: double the data rate (from 1 to 2 Mbits/s), four times the range, and eight times the advertising packet size (beacons). While sending data using Bluetooth 5 draws slightly more power than previously, transmission times are cut in half. As a result, the same amount of data can be sent with just over 50% the total power required by Bluetooth v4.2. In addition to faster data transmission rates, shorter transmission times result in improved co-existence with other 2.4-GHz radios (including other Bluetooth LE connections) as the radio is active for a shorter duration. 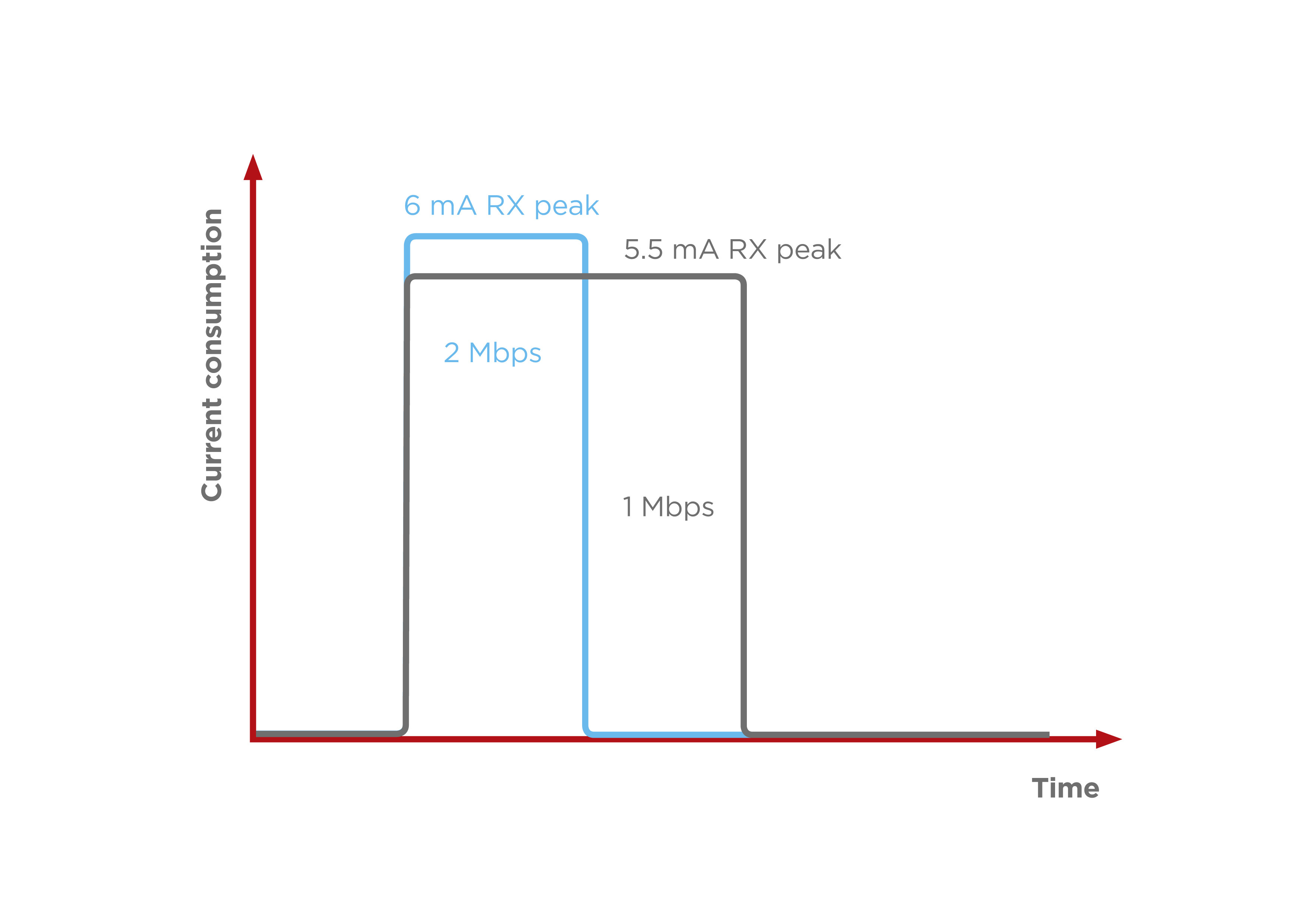 By extending the range of Bluetooth signals, the Bluetooth SIG is seeking to extend the reach of Bluetooth LE to cover entire homes. Two new modulation options, 125  and 500 kbits/s, potentially offer a 4X range improvement compared to the current Bluetooth LE specification. In line-of-sight, the range of Bluetooth signals is expected to exceed 1 km using the same amount of power. The Bluetooth 5 spec further increases maximum output power to 20 dBm compared to today’s 10 dBm. This enables even greater distances between Bluetooth 5 devices, of course at the cost of increased power consumption.

The third new feature Bluetooth 5 brings to the table is extended advertising capability. First introduced in Bluetooth LE, advertising lets low-power sensor nodes signal “I have new data” to a central unit. If the central device is interested in that data, it initiates a connection during which it exchanges data with the sensor node. Once the exchange is completed, the connection is closed and the sensor node goes back into low power mode. Short advertising messages were sufficient to enable this type of exchange.

However, it didn’t take long for device makers to figure out that this kind of “non-connected” advertising message can also be used as a beacon to broadcast information without first having to establish a connection. Apple developed their way of doing it in iBeacon, and Google countered with Eddystone.

With the popularity of the beacon use case came the desire to make it more powerful and broaden its scope. Bluetooth 5 takes the beacon use case to a new level by increasing advertising message length from 31 bytes to 512, even allowing for multiple 512-byte messages to be linked together. To avoid congestion, it extends these longer advertising packets to all 40 available channels rather than limiting advertising to three channels as in the previous specification.

Shortly after the release of the Bluetooth 5 spec, the SIG released the specification for Bluetooth mesh. Together, Bluetooth 5 and Bluetooth mesh lay the foundation for many new applications and use cases. They’re particularly important for the IIoT as they enable use cases previously only possible with technologies like ZigBee, Sub-GHz, etc.

In a Bluetooth mesh network, network nodes are configured to operate in a publish-subscribe model. Information among nodes is transmitted in messages. Nodes providing data or actions use messages to publish information on the network. Other nodes can either collect the data in messages or use it for actions. Figure 2 depicts a simple mesh network made up of switches and lights and shows how they are configured to operate. 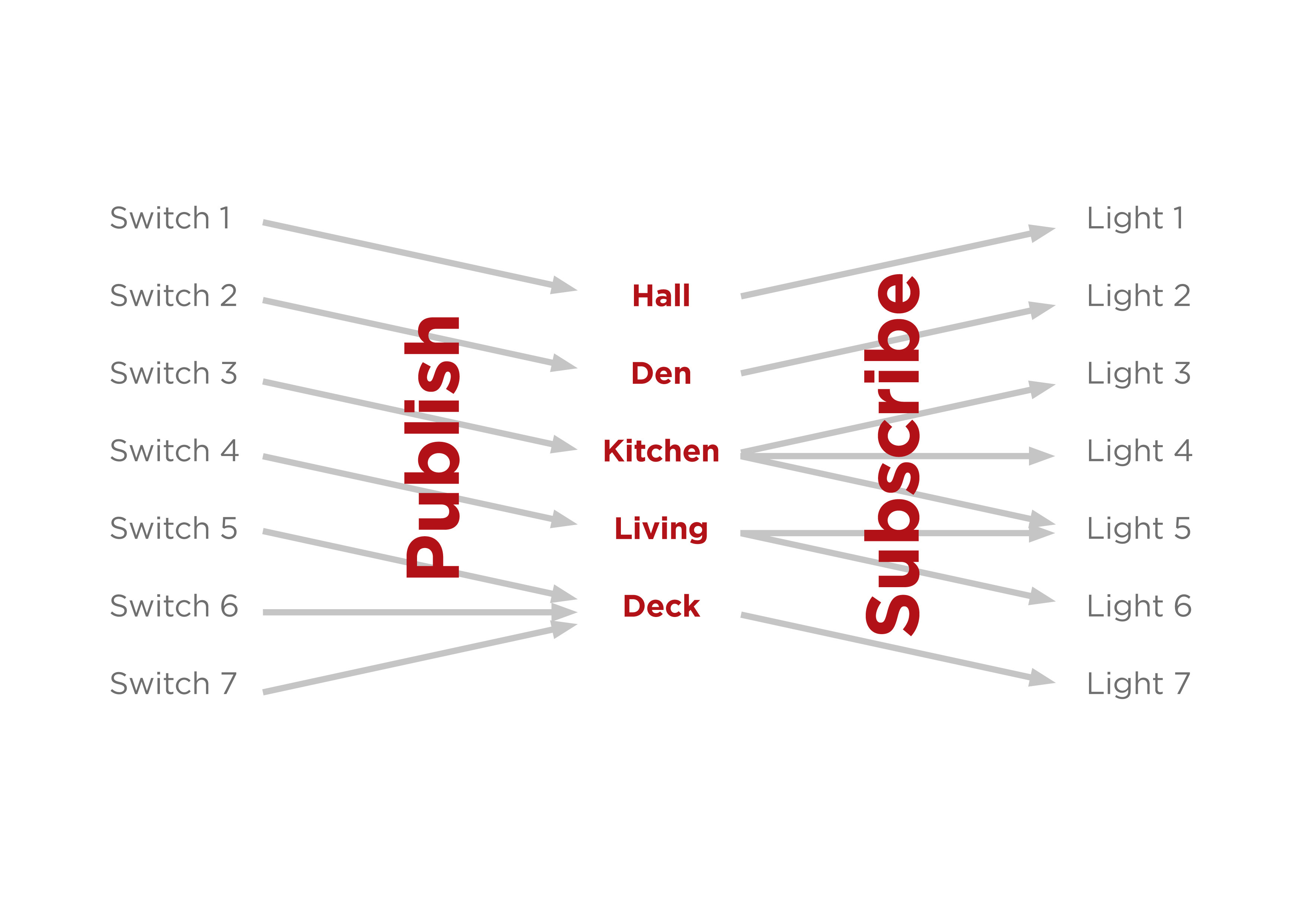 To spread a message across the mesh, the source node simply broadcasts its message using advertising. Other nodes in the network then receive and forward the message to all other nodes, extending the range of the mesh network well beyond the capability of an individual Bluetooth link. This is known as flooding mesh. There are several basic mechanisms in place to ensure that the network is not overloaded. Examples include not relaying messages that a node has already touched, and limiting the number of hops. 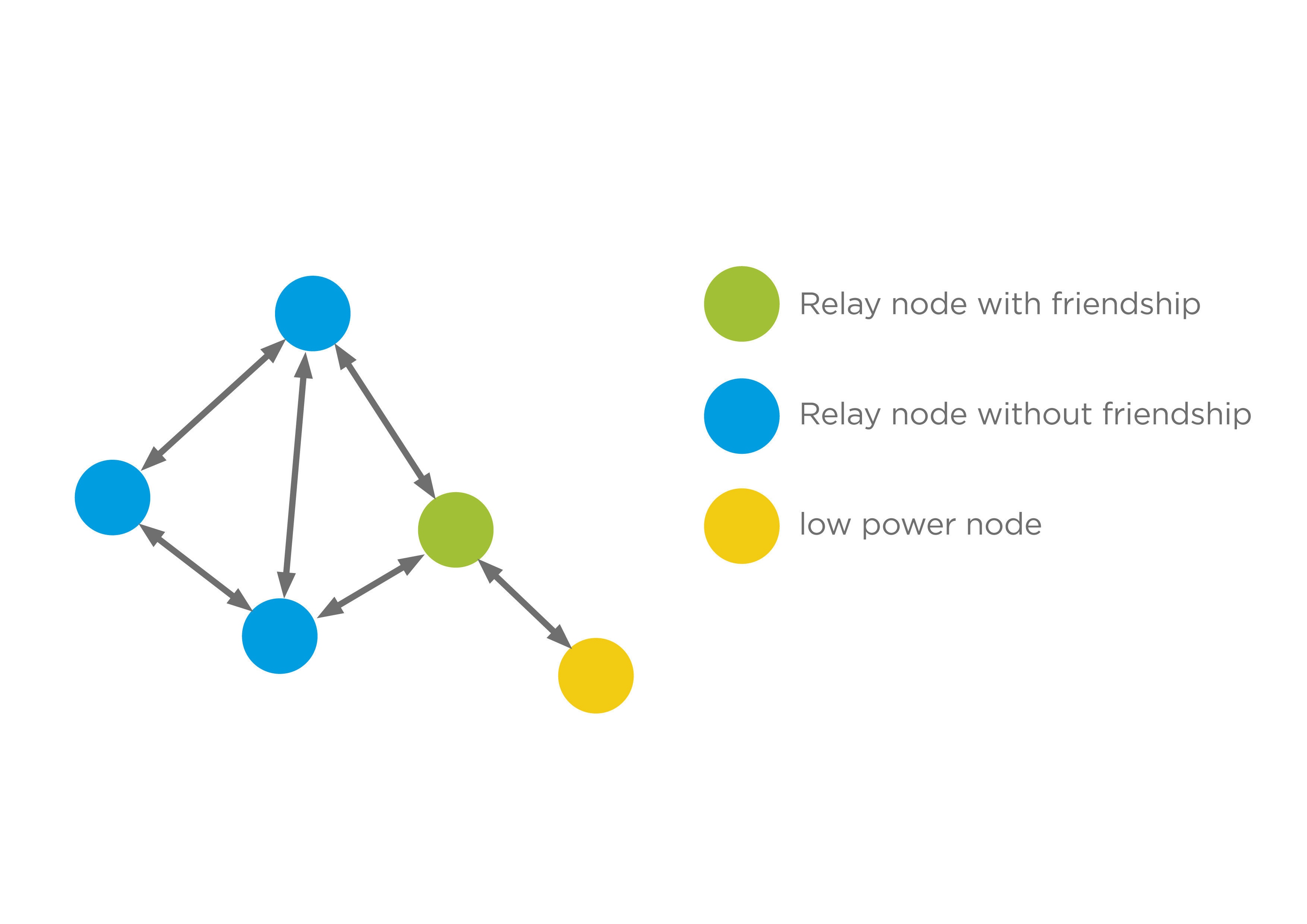 Industry 4.0, sometimes used synonymously with the IIoT, is an initiative that was launched by the German government in 2011. Since then, many other regions have created their own variants of the concept. In 2015, Japanese companies formed the Industrial Value Chain Initiative (IVI). In the US, the Industrial Internet Consortium was set up to encourage greater use of the Internet in the American manufacturing sector.

In predictive-maintenance applications, for example, sensors are added to traditional electric motors. Sensor data is then analyzed to assess their operation (temperature, vibrations, etc.) and predict when maintenance becomes necessary. The objective of predictive maintenance is to prevent unexpected failures that would cause unplanned disruptions in the manufacturing process, but also to avoid unnecessary maintenance operations imposed by an overly conservative preventive maintenance schedule.

The enhanced features provided by Bluetooth 5 pave the way for a number of new IIoT applications. Examples include device firmware upgrades, large industrial sensor networks, asset tracking, connected buildings, and industrial real-time control. The increased data rate provided by Bluetooth 5, up to 1.4 Mbits/s, is sufficient to quickly send small files over the Bluetooth LE connection. This makes it possible for industrial devices running embedded firmware, such as variable-frequency drives, to use a Bluetooth LE connection to transfer firmware files for Device Firmware Upgrade Over The Air (DFU-OTA). In fact, the latest generation of smartphones that support Bluetooth 5 may be used as mobile gateways between the Internet and the industrial device.

With a data rate of 1.4 Mbits/s, it only takes seven seconds to send a 1-Mbyte firmware file, which is typical in many embedded industrial products. Device manufacturers might even consider replacing Wi?Fi with Bluetooth LE for this use case, bringing down both device cost and power consumption. 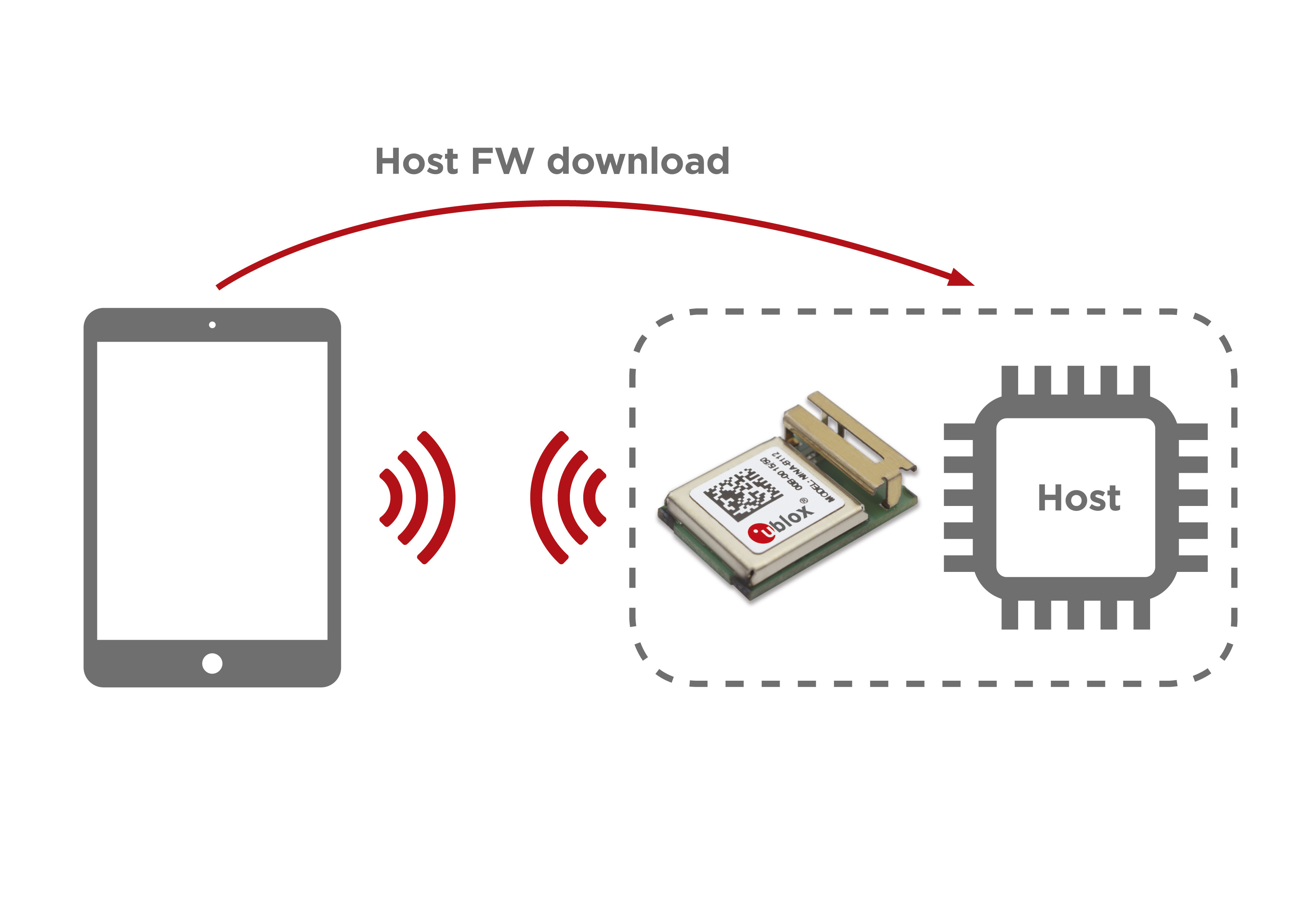 In the predictive maintenance use case, sensors need to be connected to a number of otherwise unconnected devices. There are two ways to do this; sensors can either connect directly to the cellular network, or they can connect to short-range radio networks that, in turn, are connected to cellular gateways. The second approach is referred to as a capillary sensor network.

Bluetooth 5 and Bluetooth mesh can support capillary sensor networks by letting large numbers of sensors connect into a large network. Using Bluetooth as the short-range radio has multiple advantages over other short-range technologies. The main one is that Bluetooth is supported in almost all smartphones and tablets, making them the obvious tools for sensor and network configuration. 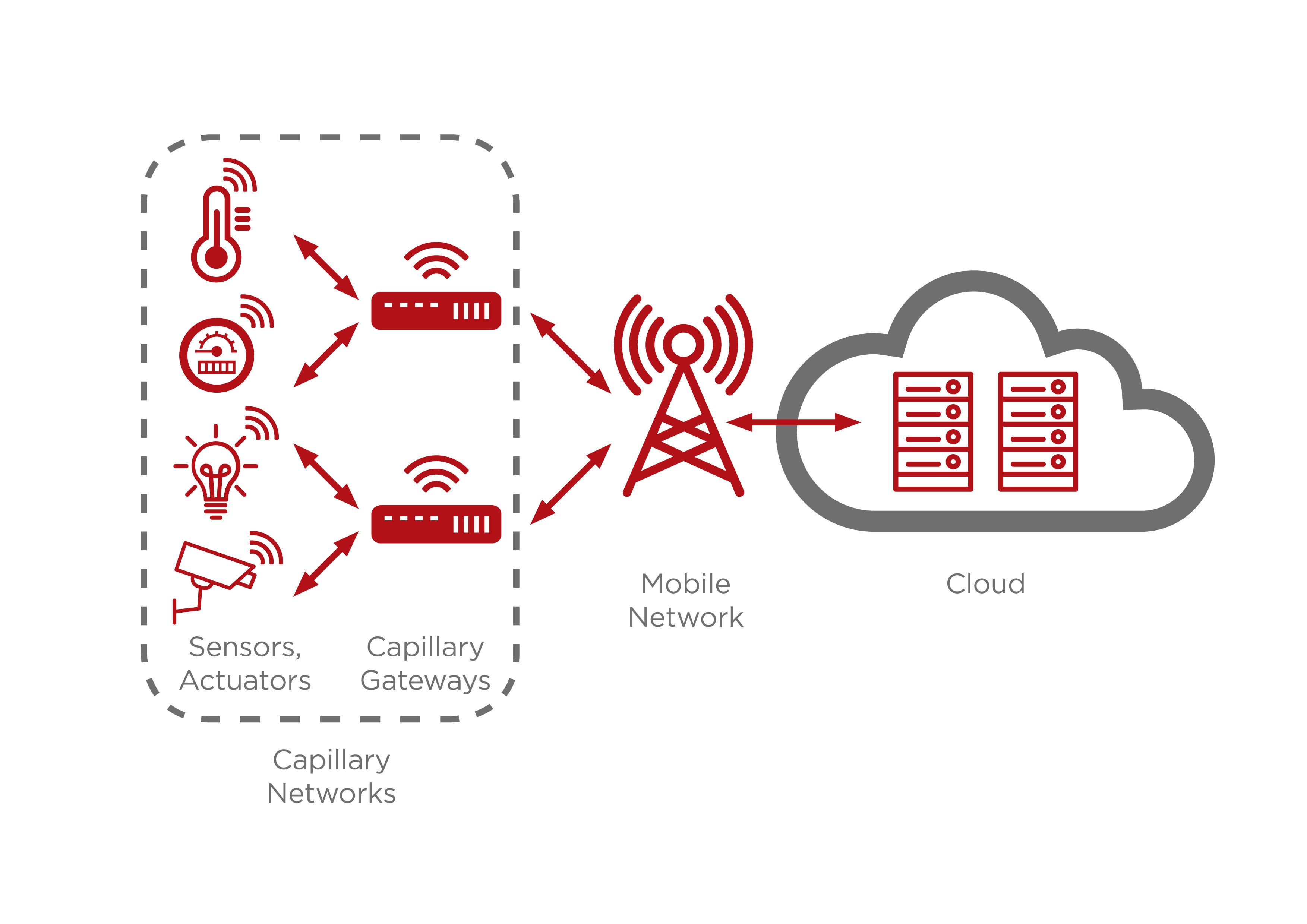 [Figure 5 | Capillary networks according to Ericsson.]

Mesh networks set up to control lighting in a building or factory, e.g., can be used to enable additional use cases such as asset tracking. This requires configuring Bluetooth-mesh-enabled asset tags to connect to the same mesh network, allowing nodes in the mesh sensor network to report which asset tags they detect back to devices monitoring the network. Information gathered from several nodes in the network can then be used to determine the approximate location of each asset. The accuracy provided is sufficient to know on what floor and in which room valuable assets are located. Examples of assets that could be monitored using this approach are expensive, moveable industrial equipment and specialized tools at manufacturing sites.

Pelle Svensson is a Product Marketing Manager in the u-blox product center short range, based in Malmo, Sweden. During his career, Pelle has set up and lead the US operations as well as developed the APAC business development efforts. He has also gained a thorough experience within product development, training, and marketing of industrial automation solutions.

Pelle is part of the Product Strategy team in Product Center Short-Range at u-blox AG since May 2014 when u-blox acquired connectBlue. Pelle worked for connectBlue since the start in 2000 and established the product distribution channel network in Europe and US.