Whether it be texting on your smartphone, working out with your smartwatch, taking notes on your laptop, getting directions in smart car, buying goods from a kiosk at the mall, and even receiving the morning news right off your refrigerator, the touchscreen has fastened itself onto nearly every device in today’s consumer electronics market.

Whether it be texting on your smartphone, working out with your smartwatch, taking notes on your laptop, getting directions in smart car, buying goods from a kiosk at the mall, and even receiving the morning news right off your refrigerator, the touchscreen has fastened itself onto nearly every device in today’s consumer electronics market. As a replacement for the typical computer mouse or stylus, touchscreens allow the user to interact directly with a device using just their finger, and their flexibility enables an interactive user experience for every generation and demographic,

But how did this sophisticated, yet inexpensive, invention come about?

Believe it or not, the very first touch screen was invented in 1965 in Malvern, England at the Royal Radar Establishment (RRE), a telecommunications research establishment (TRE). The UK National Air Defense was in need of a solution that would accelerate response time, minimize workloads, and allow for more accurate decision making for air traffic control operators. Eric A. Johnson was working at RRE at the time and thought of incorporating a touch interface that  provided a set number of choices for  an operator to choose from when working with a computer. 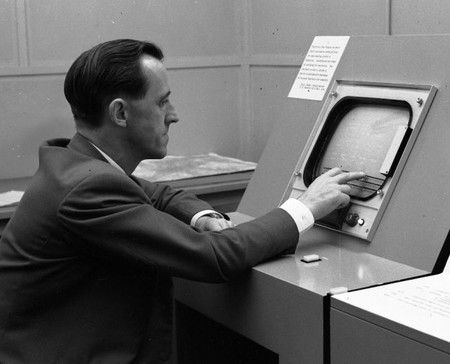 In 1965, Eric A. Johnson developed a touch interface to control computers used by the U.K. National Air Defense.

Johnson’s design was patented in 1966. He later improved his design and published an article, “Touch display—a novel input/output device for computers,” in which he noted his use of capacitive touchscreens in air traffic control in 1968. Johnson’s design consisted of a  glass-coated insulator with a transparent conductor made of indium tin oxide. Thin copper wires placed across a computer's cathode ray tube (CRT) allowed the circuits to sense when they were being touched.

Although Johnson published the idea, it wasn’t made a reality or used by British air traffic controllers until the 1990’s.

While working at the University of Kentucky during the 1970s as a physics professor, Dr. G. Samuel Hurst created a new design, an electronic graphics "touch sensor" he called, the Elograph. The invention was a coordinate measuring system that was later patented by the University of Kentucky. By 1971, Hurst had transformed his invention into a small, eponymously-named business, Elographics. The business started out rocky after Hurst realized he was marketing his product to a consumer audience when it was the scientific market he really needed to target. 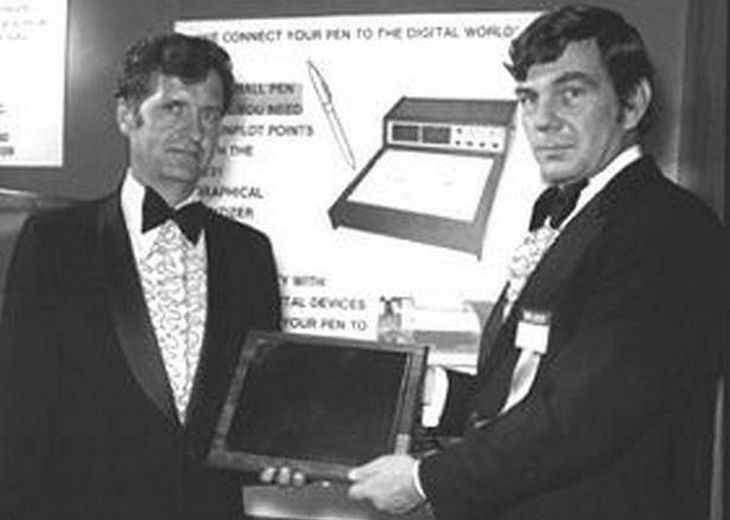 Dr. G. Samuel Hurst's Elograph was first patented in 1971 and went on to serve as the basis for Elographics, a company that co-patented the first resistive touchscreen in 1977.

In 1973, the Elograph was already gaining recognition as the driving force behind what we now know of as the touch screen revolution. It was named one of The Most Significant New Technical Products of 1973 by Industrial Research, even though it wasn’t actually produced until 1974.

In 1977, Elographics, now Elo TouchSystems, created and patented their five-wire resistive technology in partnership with Siemens. Together, the two companies created and patented the first resistive touchscreen and also produced the first curved-glass touch screen. Resistive touchscreens were (and are) only able register a single-touch, however, so more sensors were needed per touch than capacitive touch devices. These systems would later grow to be more popular than their capacitive counterparts, but also more costly.

By 1980, touchscreens fully emerged as a new way of controlling computers. The following year Hewlett-Packard released their HP-150, a touchscreen consisting of infrared emitters and detectors that sat on the borders between the screen and the device’s frame. The infrared beams allowed the device to track the users touch when the infrared beams were interrupted. However, the HP-150 didn’t not receive the recognition it hoped to so when the HP Touchscreen II was released in 1984, the touchscreen was provided as an optional component. 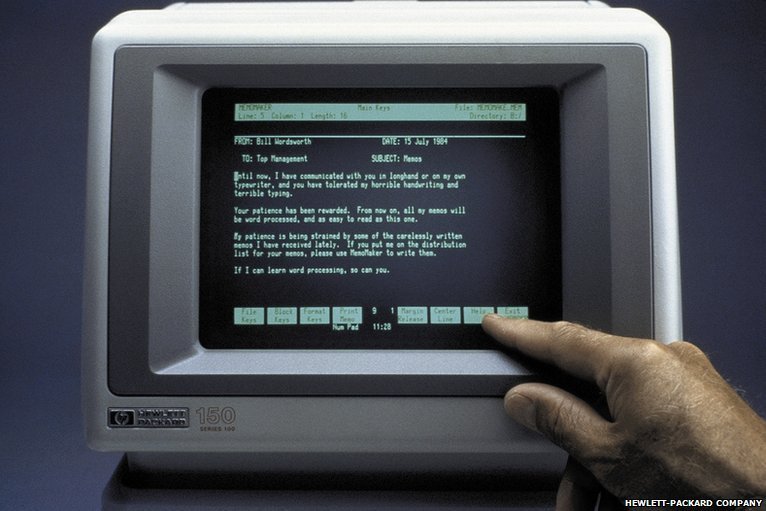 A Real Sense of Touch

In 1993, Apple announced the Newton MessagePad, also known as the PDA. The handheld computer featured handwriting recognition and included a stylus that was used for on-screen menu options. Although the idea and implementation were received well, the software was incapable of capturing the public’s full support and the product was discontinued in 1998. But still, Newton technology is what, in part, set in motion the creation of the smartphone. That same year, FingerWorks, a gesture recognition company, developed multi-touch gesture operated iGesture Pad. The company went out of business in 2005 and was bought by Apple that same year. 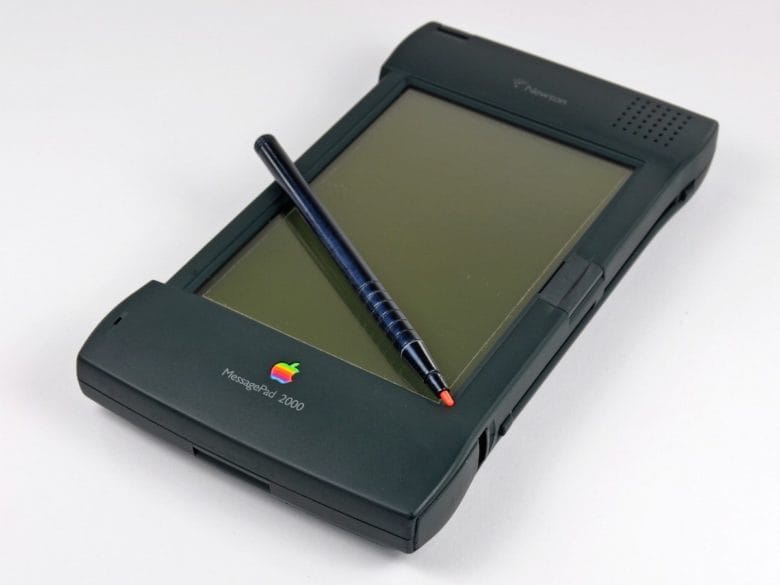 Apple's Newton MessagePad laid the foundation for later touch-enabled devices such as the iPad and iPhone.

Other big tech companies were also trying to get in on this new touchscreen technology. Microsoft, for example, released the Microsoft Surface in the early 2000s. The original Microsoft Surface measured about 30 inches, nearly two-thirds the size of a four-person kitchen table, and paved the way for today’s larger touchscreen devices such as kiosks, ATMs, and even touchscreen refrigerators. Nintendo also released their portable gaming devices, the Nintendo DS, featuring a touch input in 2004. The device was very successful, reaching about 76 million units sold over a nine-year period.

The original iPhone, released in 2007, featured a complete touchscreen and eliminated the need for the traditional, physical dialing pad. The phone featured limited multi-touch capabilities but was still widely received due to its unique design. Today, the iPhone era continues, and the incorporation of a touchscreen on phones, tablets, and many other devices is a must. 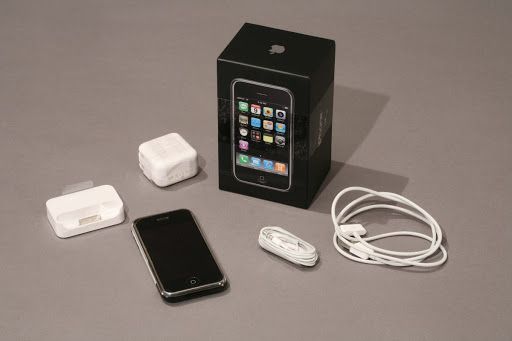 The iPhone was the culmination more than 35 years of touchscreen research and development.

Touch screens have changed the way we interact and collaborate with each other, with the outside world, and they’re going nowhere any time soon. 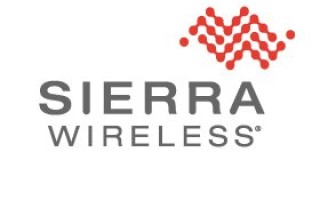