Why the U.S. is Falling Behind in AI and Autonomous Drive Tech, Part 1

At CES this year, I realized which developers were working with more advanced AI. And they weren?t American. Or, for that matter, even ?Western.?

Embedded Computing Design recently conducted targeted industry research on the prevalence of machine learning and artificial intelligence in the development community. Much to our surprise, more than 75 percent of the respondents are already researching or using AI in one capacity or another.

Now, AI and machine learning are not new, and the questions didn’t specify whether respondents were indicating the use of time-honored techniques like principle component analysis, decision trees, etc. On the other hand, modern AI/ML is becoming synonymous with neural networking, so I took the results at face value.

One important note, however, is that the respondents were evenly distributed geographically. At CES this year, I realized which developers were working with more advanced AI.

And they weren’t American. Or, for that matter, even “Western.”

MINIEYE licenses its neural net IP to Tier 1 automotive suppliers looking to achieve the functionality of Mobileye products at a fraction of the cost and power consumption. The company’s neural network technology is based on a three-pronged architecture that enables small, fast, and accurate algorithms.

The MINIEYE neural net IP is optimized to run on automotive-grade Xilinx Zynq-7000 SoCs, which provide dual Arm Cortex-A9 CPU cores, two floating point units, and, of course, FPGA fabric to ensure that neural network workloads are able to run on the most efficient compute resource. The current architecture only consumes 60 percent of the Zynq platform’s performance and memory resources, leaving ample headroom for end user applications and value add. 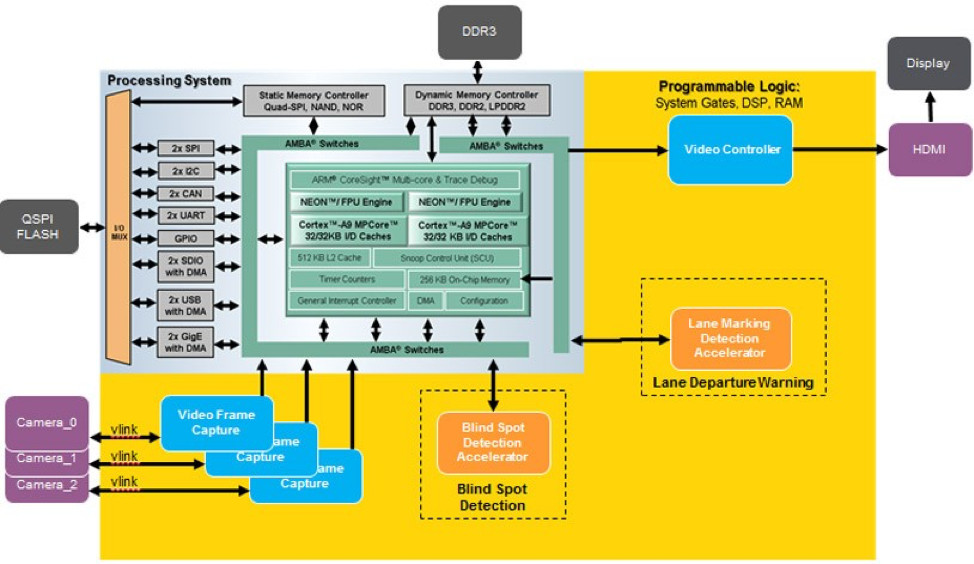 BYD’s new Song SUV is just one of the many BYD vehicles with ADAS systems powered by Xilinx Zynq chips. Photo courtesy of BYD.

But you’re working in the U.S. or Western Europe. So what?

Well, a few months ago MINIEYE began marketing its IP to American automakers, admittedly without any U.S. traffic data to support their algorithms. That was in the October timeframe. By the time CES 2019 rolled around, the company had retrained their AI models and had fully functional, highly accurate algorithms to demonstrate to potential customers – based on U.S. traffic.

The way MINIEYE achieved this was through another homegrown technology called Mini-Annotation, which is essentially an AI tool that automates the process of labeling and training AI models. MINIEYE is using AI to train its AI.

While you may think that’s not a prudent or safe way of developing technologies for safety-critical applications, Dr. Guoqing Liu, Founder and CEO of MINIEYE, says that this process removes 80 percent of the human errors associated with annotating and labeling super wide, raw, and rough input data sets. Dr. Liu acknowledges that need for some sort of benchmarking mechanism to validate accuracy, but asserts that the ability of MINIEYE solutions to identify the presence of an object with 100 percent accuracy has been validated by the auto manufacturers designing his technology into vehicles.

And being first to market is a big, big advantage.

My travels have resulted in many discussions about AI in mission- and safety-critical applications, with the general consensus being that meaningful implementations of the technology are still some way off. Rightfully so, as engineers are understandably wary of the unwieldy potential that unsupervised learning systems hold. Supervised learning, currently the leading field of research, requires monumental data sets and the time to continually refine them. Even after these models have been trained, we hesitate to use AI algorithms as more than just a single input amongst numerous other values.

Everything we believe about developing safety-critical systems is based on determinism, repeatability, and our ability to validate this performance over time in various environments. Currently, this is counter to most AI.

Then, there is the school of thought adopted by MINIEYE and a number of other foreign companies, not just in China. Because the most effective method of training an AI model is to constantly feed it data, by certain logic the best way to train a model is to deploy it into the real world as quickly as possible. To harness these benefits you must be able to label data flows with extreme speed and precision, which, in theory, is a tailor-made scenario for AI training AI.

While it may not be widely accepted, development principles could be delaying your deployment while the competition soaks up market share.

Read "Why the U.S. is Falling Behind in AI and Autonomous Drive Tech, Part 2" here.