The relativity of high-Q capacitors

For many high-power RF applications, the ?Q factor? of embedded capacitors is one of the most important characteristics in the design of circuits.

For many high-power RF applications, the “Q factor” of embedded capacitors is one of the most important characteristics in the design of circuits. This includes products such as cellular/telecomm equipment, MRI coils, plasma generators, lasers, and other medical, military, and industrial electronics.

Often expressed as a mathematic formula, the Q factor represents the efficiency of a given capacitor in terms of its rate of energy loss. In theory, a “perfect” capacitor would exhibit no loss and discharge a full energy transfer, but in the real world, capacitors always exhibit some finite amount of loss. Although many high-Q capacitors are available on the market, performance can vary widely depending on design and quality of manufacturing.

The higher this energy loss, the more heat is generated within the capacitor that must be dissipated or cooled.  For low-power applications this heat is insignificant. However, for higher-power applications, this heating can be substantial. If the temperature rises significantly, it can damage nearby components and, in extreme cases, desolder parts from the circuit board.

Although many low-power applications do not require consideration of the capacitor’s Q factor, energy losses can increase significantly at higher frequencies, leading to other performance issues even in low-power circuits. Reduced receiver sensitivity and link budget can sometimes be correlated to higher-loss capacitors.

Your performance may vary

Despite its critical role in RF electronics, not all high-Q capacitors are created equal. It turns out high-Q capacitors’ performance is actually relative, varying widely based on design, manufacturing, quality control, and even type of performance testing. Further muddying the water is the fact that manufacturers use numerous terms to reference their high-Q capacitors, including “high-Q,” “ultra-high-Q,” “low loss,” and “RF capacitors.”

“In many ways, ‘high-Q’ is a relative term,” says Scott Horton of Johanson Technology, a company that manufactures a variety of multilayer ceramic capacitors (MLCCs). “It may seem like every [capacitor] manufacturer has a high-Q product, but the performance of the parts in the circuit can be quite different.”

To distinguish between the choices, most MLCC capacitors publish ESR performance values online. However, the performance claims of capacitor manufacturers should be viewed with some doubt, says Horton.

ESR tests are conducted in laboratory settings and are most often derived by one of two methods: by using vector network analyzers (VNAs) or resonant lines. However, the accuracy of this data is limited by setup and calibration of these systems.  When measuring capacitor Q on a network analyzer, the configuration and calibration are critical to ensure meaningful data is collected. Not all measurements on VNAs are equally valid; in fact, poorly calibrated VNAs can yield wildly inaccurate results.

A more reliable method of testing the Q of capacitors is the well-established “resonant line” system; the Boonton 34A resonant line has been the de facto standard in the industry for decades.

Companies like Johanson Technology publish ESR performance data from a Boonton 34A resonant line online. Since this method depends on the frequency accuracy of a signal generator and a very stable resonant line, measurements can be made with extreme precision that is repeatable over time.

“I can’t comment on how some capacitor manufacturers end up with the values they publish, but when I put the capacitor on a resonant line, which is in accordance with the mil standards, and test these parts in a side-by-side A/B comparison test, we see significant differences from their published data.  I would believe those relative results,” says Horton.

Another area that can affect the ESR of a high-Q capacitor is the quality and consistency of the manufacturing process.

By definition, MLCC capacitors consist of laminated layers of specially formulated, ceramic dielectric materials interspersed with a metal electrode system. The layered formation is then fired at a high temperature to produce a sintered and volumetrically efficient capacitance device. A conductive termination barrier system is integrated on the exposed ends of the chip to complete the connection.

In MLCCs, capacitance is primarily determined by three factors: The k of the ceramic material, the thickness of the dielectric layers, and the overlap area and the number of the electrodes. So a capacitor with a given dielectric constant can have more layers and wider spacing between electrodes, or fewer layers and closer spacing to achieve the same capacitance.

Significantly changing the layer counts in MLC capacitors can change performance characteristics significantly. As such, the leading capacitor suppliers tightly control the layer counts of each part made. Unfortunately, this is not a given in the industry, with some suppliers delivering products with the same part number, but a variable number of layers. In short, the same part number can have significantly different designs, which can lead to undesirable impedance changes in the capacitor. These variations occur from supplier to supplier and can even be seen with a single source.

“If a MLCC manufacturer is not tightly controlling the layer count, they might be providing 10-layer parts in one batch and then later deliver 17-layer parts in a subsequent batch,” explains Horton. These two parts will not perform the same at high frequencies.

In other words, when layer counts vary, filters may not perform as designed and allow radiated emissions to exceed the FCC or ETSI requirement in the finished product. Lot-to-lot changes in capacitor performance can lead to costly product recalls.

“If there is a shift in the series resonance frequency, your filter may no longer meet FCC emission requirements,” says Horton. “So, by tightly controlling the layer counts, manufacturers help ensure that LC filter performance remains consistent from lot to lot, day to day, month to month, year to year.”

High-loss capacitors can also affect aspects such as battery life. For systems using RF amplifiers, it is inefficient to have power absorbed or dissipated by a capacitor. Engineers must then use amplifiers to make up for losses caused by low-Q capacitors, which results in faster battery drain in handheld devices. High-Q capacitors can also improve receiver sensitivity by reducing losses between the antenna and the transceiver.

High-Q capacitors vary from standard capacitors in design.  To achieve the lowest losses, leading companies use the lowest-loss dielectrics, inks, and electrode options.

For example, most low cost-commodity capacitors use nickel electrodes; however, nickel is a poor conductor known for high loss at RF and microwave frequencies. Silver and copper electrodes are superior, perform better than nickel, and are used for most high-Q applications. This type of electrode has the added advantage that it does not create a magnetic field like nickel. This factor is important for applications such as MRI receiver coils, where strong magnetic fields are involved.

For the highest-power RF applications, a number of leading manufacturers offer pure palladium electrodes. At higher frequencies, however, silver is a superior conductor when compared to palladium. For this reason, Johanson Technology incorporates silver electrodes in its ultra-high-Q (lowest ESR loss) offering, the E-Series multilayer RF capacitors (Figure 1), in its high-power standard 1111, 2525, and 3838 size capacitors. 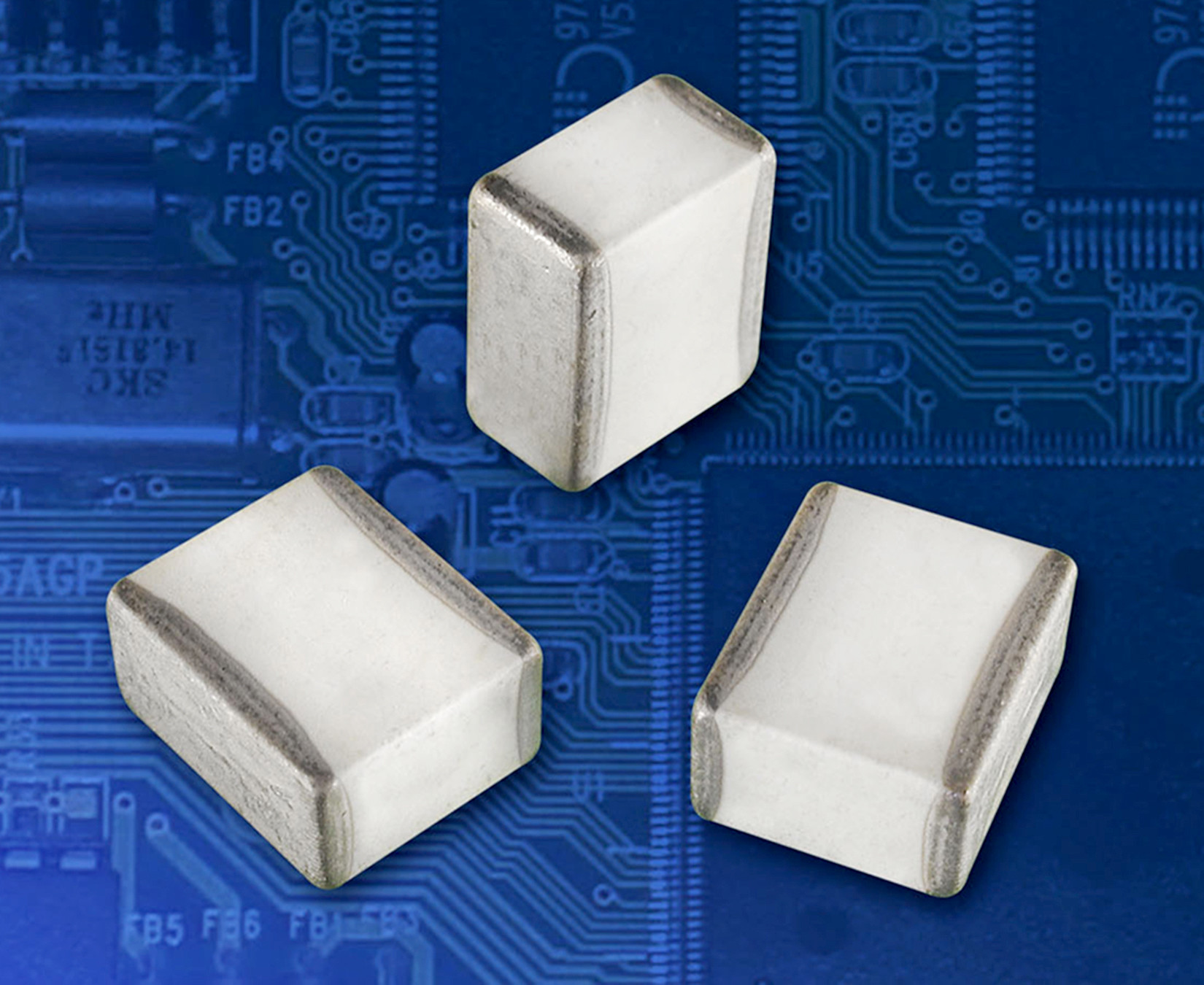 Even minor details like the orientation of the capacitor in the tape reels can have a direct impact on the performance of a circuit. Traditionally, high-Q capacitors are available primarily in a horizontal electrode configuration when mounted in tape and reels. Some manufacturers are offering the MLCC capacitors in both horizontal and vertical electrode orientation configurations.

However, mounting capacitors in a vertical configuration is also an industry “trick” that effectively extends the usable frequency range of capacitors.

In addition to the SRF (which is based on the given physical size/construction and a given capacitance value), capacitors also exhibit parallel resonant frequencies (PRF). As a rule of thumb, PRF is approximately double the SRF. At the PRF, the transmission impedance goes relatively high, and the capacitor is very high-loss around this frequency.

If there is a lesson from this discussion of high-Q capacitors, it is that selecting the ideal MLC capacitor requires more than a voltage, capacitance value, and tolerance. This may also explain why a capacitance value from one supplier may not directly correspond with another supplier in critical matching circuits. The design and quality/consistency of manufacturing plays just as big a role, as does the type of testing to verify performance.

“Don’t assume that because the capacitor is labeled ‘high-Q’ it is going to deliver the required performance,” concludes Horton. “These capacitors play a critical role in RF transmission and reception of military, medical, and industrial electronics, so they must perform as expected, optimized to minimize energy loss and variation from one batch to another. If not, these electronics may not perform as expected in the field.”

Jeff Elliott is a Torrance, California-based technical writer. He has researched and written about industrial technologies and issues for the past 20 years.