AIoT: The Intersection of AI and IoT for Better and Faster Decision Making

That?s something that?s just starting to garner its share of the spotlight. It actually involves the embedding of AI technology into IoT components.

The Internet of Things (IoT) has been around for quite some time. And Artificial Intelligence (AI) has seen more than its share of iterations as well. But the combination of the two? That’s something that’s just starting to garner its share of the spotlight. It actually involves the embedding of AI technology into IoT components. 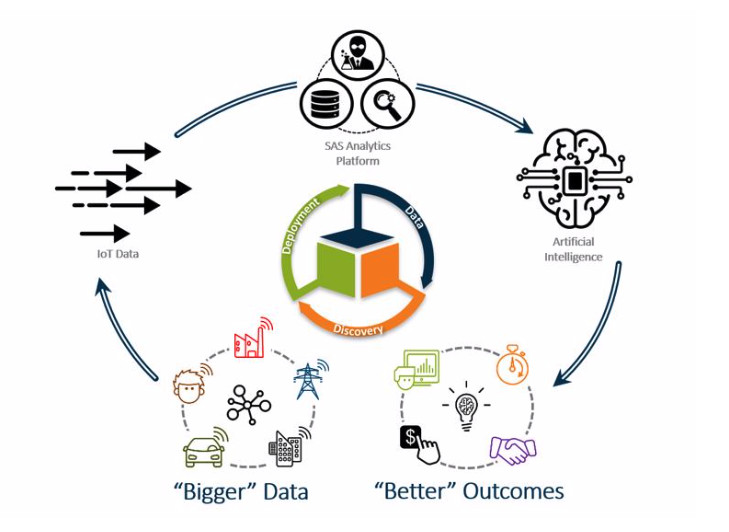 The convergence of artificial intelligence and the Internet of Things results in AIoT. Source ARC Advisory Group

Dubbed AIoT, the convergence of AI and IoT is a powerful tool, either at the Edge or in the Cloud. The goal for the technology, which is sometimes referred to as Artificial Intelligence of Things, is to achieve more efficient IoT operations, improve human-machine interactions, and enhance data management and analytics. If implemented properly, those AI analytics can transform IoT data into useful information for an improved decision-making process.

While there are some fundamental issues to be ironed out in AIoT, it’s nothing that can’t be overcome. Those issues are mostly on the software side, both in the operating system and the application code, as well as the proper resource allocation and segmentation. In addition, the back-end management and manufacturing processes differ from each other and will continue to diverge. Vendors like Innodisk understand that smart products and applications with AI and IoT functions are the future and will quickly become mainstream in the market.

At the Edge, the latest microcontrollers are combing with a vast array of sensors to permit a relatively high level of processing to occur and decisions to be made locally—all without going back to the Cloud. That has some obvious advantages; namely, it allows for real-time decisions as the latencies associated with Cloud-based decision making go away. In applications like autonomous driving or medical devices, that timing is critical. A second advantage is the cost savings that’s gained by not having to transmit through a potentially expensive medium, that being the cellular network.

With this new level of processing power at the Edge, developers are understanding that machine learning, a subset of AI, is possible at the Edge. Machines can become smarter over time and decision making can be refined to increase accuracy beyond what was possible before without user interaction. And in some cases, it’s far better than even a human can handle.

That same performance boost is occurring in the Cloud, on a much grander scale, mostly due to the removal (or lessening) of power and space constraints. It’s here where AI really has the potential to shine. It’s obvious what the latest microprocessors are capable of. But when you combine that processing power with the today’s (and tomorrow’s) AI algorithms, the possibilities are unbounded.

Learn More at the AIoT Summit

To help engineers and developers take advantage of this emerging technology, Innodisk is hosting the one-day AIoT Summit (August 7, 2019 in Santa Clara, CA), which will feature expert lectures and discussions from Innodisk and its partners on the emergence of AIoT and its many applications. Industries that will be featured include industrial, manufacturing, automaton, public facilities, transportation, robotics, agriculture, and health care, among others.

Attendees of the AIoT Summit will hear how Innodisk is driving the future of AIoT through the development of innovative industrial embedded flash and other memory solutions. The end goal is to help the engineering community advance the next-generation of smart AI-enabled IoT devices. Ample networking opportunities with Innodisk and its strategic partners is also a key feature of the Summit.