The hidden world of the IIoT: Between sensors and the cloud

When you think about the Internet of Things (IoT), chances are that you think about sensor-enabled devices or cloud-based applications. But what’s happening between the sensors and the cloud?

The answer: complicated and necessary processes that turn lots of small data into big data. These processes make possible the distributed intelligence, autonomous operation, and real-time performance of the IoT. 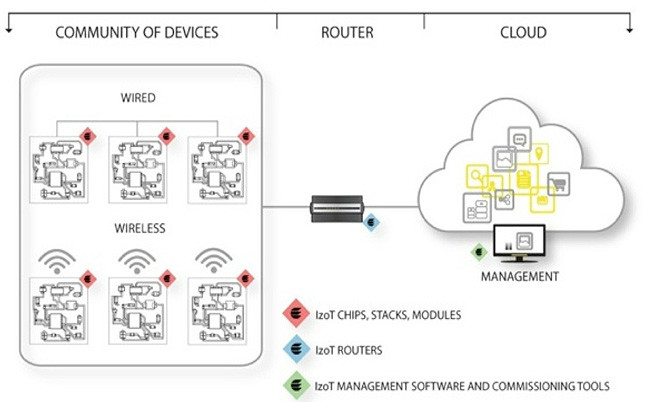 Let’s look at a few of the hidden considerations that make the IIoT possible.

Protocols
Industrial networks are awash in protocols. Operators of each type of specific network – whether it’s connecting the equipment on a manufacturing production line, or controlling a city’s outdoor lighting, or operating the HVAC system for a commercial office building – might have multiple networking protocols from which to choose. These protocols are typically incompatible within these specialized networks, not to mention among different networks.

But of course, the IIoT is all about convergence into a single environment. That’s why it’s necessary to be able to translate or unify protocols as disparate as BACnet, LON, and DALI in building automation; Modbus, Profinet, and Bitbus in industrial processes; and RS-485, IEEE-488, and M-Bus in instrumentation. In industrial environments, protocol convergence entails both services-layer standards – such as device profiles, which are analogous to HTML and HTTP – and technologies for converging onto a common Internet Protocol (IP) platform.

The next generation of control networking represented by the IIoT uses IP closer to the edge of the control network. Instead of IP reaching only as far as the gateway, as in the past, IP often extends all the way to individual devices.

Gateways
The IIoT depends on collecting lots of small data and making it continuously available for big data analytics and actions. Traditional gateways mediate between data and a control network, able to provide only a static, point-in-time representation of a small subset of the total data collected. But this approach doesn’t work for big data analytics, where it’s impossible to know up front which data elements will be important in the end. As a result, it’s necessary to collect all the data locally from all conceivable devices, and to do so dynamically, before sending the important data to the cloud.

Native IP devices are ideally suited for big data analytics, and IP gateways replace traditional static gateways in the IIoT. Moreover, the IIoT must assimilate the billion or so existing industrial devices already operating, which are long-lived and use pre-IP technology. To enable these operational technology devices to participate in information technology networks, it’s also necessary to have legacy-to-IP gateways. Taking this concept one step further, the trend in the IIoT is for IP-enabled control networking to depend more on routers than gateways to interconnect networks.

Most IIoT environments will need to use both wired and wireless connectivity. While wireless dominates in the consumer IoT, many use cases in industrial settings require wired communications for reasons ranging from mission-critical reliability and security to line-of-sight issues.

Projections for IoT value overall are enormous, and the return on investment for the IIoT segment is expected to dwarf that of the consumer IoT. That’s because while the consumer IoT’s benefits lie in things such as convenience, comfort, lifestyle, and fashion, the IIoT benefits include increased revenues, reduced opex, greater capex utilization, enhanced customer satisfaction, safety, and health.

Achieving these IIoT expectations will depend on continued refinements in those hidden and often complex technologies that lie between the sensors and the cloud.

Ron Sege is the Chairman and CEO of Echelon Corp. Previously, he served as President and COO 3Com. Ron holds an MBA from the Harvard Business School and a bachelor’s degree in economics from Pomona College.