The display can make or break a wearable design

These days, it can be hard to keep up with not just the number of techno buzzwords that have invaded our consciousness, but what's really behind the h...

These days, it can be hard to keep up with not just the number of techno buzzwords that have invaded our consciousness, but what’s really behind the hype. Many exciting developments are making their way into consumer products, as you’ll soon see. But when technical terms keep popping up, they can invade our conversations before we fully comprehend what each one means. As a result, people can become confused about what’s really out there.

Take wearables, for example. Several dozen smart electronic devices are available that can be worn on the body. As the examples in Figure 1 show, these include not only the familiar wrist-worn and clip-on fitness bands and watches, but also arm bands, head- and shoe-worn devices, and clothing. Because a great deal of the functionality tends to focus on measuring and tracking such health parameters as steps taken, heart rate, and sweat output, it’s natural that these devices have initially been most strongly embraced by the makers of sports and fitness products. But which of these products will survive and even thrive? What else that qualifies as “wearable” is on the horizon? And what role does the display play in driving these advances? 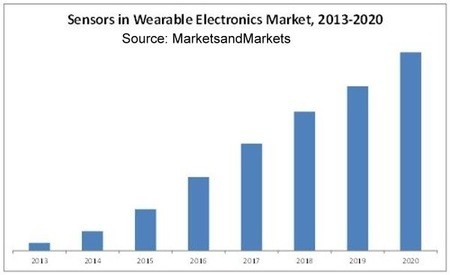 James Hayward, technology analyst at IDTechEx notes, “Whilst many mature incumbent markets have existed around wearable technology for many years, new wearable devices are driving strong growth across the entire sector. 2015 saw the first billion-dollar products in this sector, and with many new product types beginning to approach maturity, we expect sustained growth over the coming decade.” 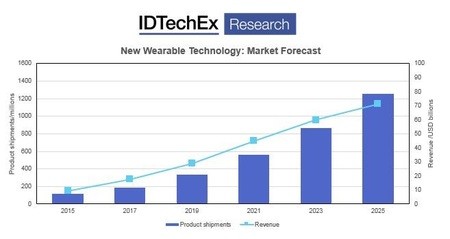 In the short term, the makeup of the consumer wearables market will continue to be dominated by wrist-worn devices, with the majority of product development focused on new-generation IoT-connected smart watches. Most of the smart watches are made by technology startups and consumer electronic giants that focused on technical features in their development. The smart watch on my wrist can count steps, show incoming calls and messages, display weather data, alert me about my next appointment—all useful features. But the watch itself is bulky, communicates to me via an annoying haptic buzz, and probably won’t win any awards for design in the traditional wristwatch industry.

As a geek, I love all smart watches, but they don’t quite make the same statement that a Rolex does, and I don’t see friends and colleagues parting with their traditional high-end watches. Yet, millions of not-so-great-looking smart watches have been sold in the past year. And their novelty has worn off sufficiently that consumers are increasingly demanding the kinds of aesthetically pleasing designs typically associated with traditional high-quality wristwatches. As a result, we’re seeing such high-end brands as TAG Heuer, Bulgari and Gucci, to name a few, dipping their toes into the smart watch pool, with curved and uniquely shaped displays helping bring some of these elegant innovations to life.

Designers will also increasingly develop smart jewelry, such as rings, necklaces, earrings, and bracelets that embrace the integration of smart devices that marry fashion with function. Similarly, we will see growth in development of clothing with built-in electronics, thanks to flexible devices. Not only are they thin and light, but they also conform to the body.

We expect to see sensors and actuators integrated that can provide a sort of “body GPS,” telling you both where you are and if someone else is getting too close to your personal space, sort of like a car’s forward collision warning sensor. Also, nanotechnology is being used in clothing to provide superinsulation, with sensors noting your condition (cold, hot, dehydrated, etc.) and connectivity that can send out an SOS if you fall or are injured while exercising or even at home by yourself.

The area that will really take off between now and 2019 in the wearables space is infotainment, a key component of augmented and virtual reality (AR/VR) devices. Interest around AR/VR at this year’s Consumer Electronics Show (CES) seems to bear this out. Not only did the gaming and VR space increase by 68% compared to 2015, with exhibitors including Oculus VR and NASA, but CES 2016 also marked the first time the show featured a dedicated AR space, with exhibits from the likes of Sony Electronics, Royole and Infinity AR.

Many areas besides gaming can benefit from AR/VR, such as education. Using these systems, and adding haptics—touch technology that uses force on the skin to deliver tactile feedback—children in dry parts of Africa, for example, can not only learn about the rain forest, but can actually experience being in pouring rain with the combination of visual, auditory and sensory experiences. Teaching can become a much richer experience using VR/AR technology, enabled by displays with excellent optical quality (more vivid colors, better viewing angles, faster response times).

Nearly all of the applications cited above must convey large amounts of information on small (even miniscule) displays, which must deliver high brightness and resolution with low power consumption. Moreover, most made their first public appearance at the annual Display Week conference and exhibition. This year’s event is May 22-27 in San Francisco.

Sri Peruvemba is a board member and the head of marketing for the Society for Information Display (SID), and is CEO of Marketer International. With over 25 years of experience in the technology industry, Peruvemba has been an influential advocate in the advancement of electronic display technology. He is an acknowledged expert on electronic displays, touch screens and related technologies, and he consults, writes, and presents on those subjects globally. Peruvemba holds BSEE and MBA degrees, and a post-graduate diploma in management, and he currently serves as a board director for Quantum Materials Corp.