Smart home as a service: The next frontier for the smart home market

The smart home will probably introduce the next technology revolution, but has not yet met its potential, as choosing devices with the right functiona...

The smart home will probably introduce the next technology revolution, but has not yet met its potential, as choosing devices with the right functionality and communication protocols to create an individualized smart home ecosystem is often too complicated for the casual consumer. Some companies are moving their focus from individual devices to packaged solutions, giving rise to the smart home as a service (SHaaS).

Smart home technology is more about the overall system – the services provided – rather than the connected devices themselves. Consumers want the benefits without having to master the technical details. That’s why the next smart home frontier will be SHaaS, provided and managed by a third-party service provider.

Cable companies and ISPs already have a box in the home and an existing relationship with the household. Utility and security companies also have this connection and are eagerly moving into this space. Large retailers like Walmart, Home Depot, Costco, etc. are looking to provide the entire service and system, from the technology selection and installation, to day to day maintenance, to ensuring security and facilitating service updates and the addition of new services. By bundling the smart home services together, this single provider can overcome the challenge of various emerging technologies and, maybe even more importantly, can provide the consumer with a single app that can manage the entire suite of home services with a common user interface. 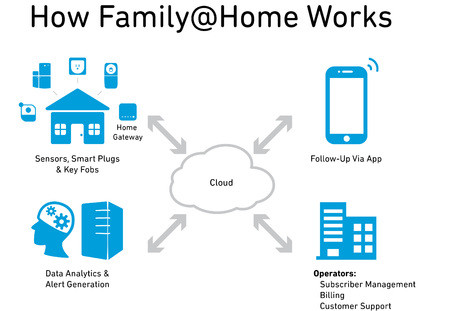 [Qorvo’s [email protected] solution is an excellent example of a Smart Home as a Service solution that combines sentrollers in the home with cloud intelligence and data analytics, all administered by a service provider.]

For management, design engineers, and product developers, that means they need to look at these service providers as new partners to reliably get their products into consumers’ homes. It also means those devices will have to live up to those service providers’ needs and standards, which might be more stringent than those of the casual consumer, particularly in the areas of connectivity, intelligence, and functionality, if their aim is to craft a streamlined, multifunctional package.

The battle between technology behemoths like Apple, Google, Intel, Samsung, etc., to become “the” smart home technology company means the development of standards for connecting devices to each other, hubs, and the web is being sidetracked by various competing communication protocols that offer neither much of a performance difference between them, nor a benefit over the established, robust wireless connectivity standards already in most homes, such as Wi-Fi, ZigBee, and Bluetooth.

Many manufacturers are building connected devices, essentially just adding a web-based remote control to their device, with its own phone app and maybe even its own internet gateway. In comparison, a smart device needs to have some kind of intelligence (which can be in the cloud) that collects data and presents actionable information. For example, a hot water heater leak detector could not only send an alarm when there is a leak, but also turn off the water flow and power supply to prevent serious home damage and reduce the costs of wasted water and power.

A clever smart home device maker will develop a system that can simultaneously utilize its sensor network for a variety of services and applications.

Cees Links is the General Manager of the Wireless Connectivity Business Unit in Qorvo, and is the former CEO and founder of GreenPeak Technologies, a Smart Home and IoT radio communications semi-conductor company, now part of Qorvo. Links helped develop the first wireless LANs, and pioneered the development of access points, home networking routers, and hotspot base-stations. He was involved in the establishment of the IEEE 802.11 standardization committee and the Wi-Fi Alliance, and he was instrumental in establishing the IEEE 802.15 standardization committee to become the basis for the ZigBee sense and control networking.