Several years ago when I first started blogging about technology and my own DIY projects, I needed a way to put video on my site. It's possible to sel...

Several years ago when I first started blogging about technology and my own DIY projects, I needed a way to put video on my site. It’s possible to self-host video, but this gets a little complicated, and using a third-party seemed like a good option. I chose YouTube for reasons I can’t remember, but most likely because I’d heard of it, and it wasn’t too hard to set up.

After giving it a try, I uploaded the videos, copied the embed code and pasted it on my website. As readers scrolled through whatever they were reading, a short video that hopefully made sense in the context of the article could be played. An unexpected thing started happening, though: people started actually subscribing to my YouTube channel. Granted, there weren’t that many at first (and certainly not many compared to popular YouTubers with millions of subscribers), but people apparently wanted to see my videos independently of my blog.

So consider this: Do you want people to be able to watch your videos without getting to it through your MakerPro blog? I would say that the answer in most cases is “yes,” and to that end I started making my videos in a format that allowed them to stand on their own. Here are my thoughts on how to maker your videos and channel, along with notes by popular DIY YouTuber Ben Brandt.

This might seem obvious, but check out other popular YouTube videos in your genre. Don’t necessarily copy their style, but you can pick up some great tips if you pay attention to the camera work and how they present themselves. Additionally, there are some great videos out there specifically dealing with how to get more subscribers, or any other number of video quality issues. 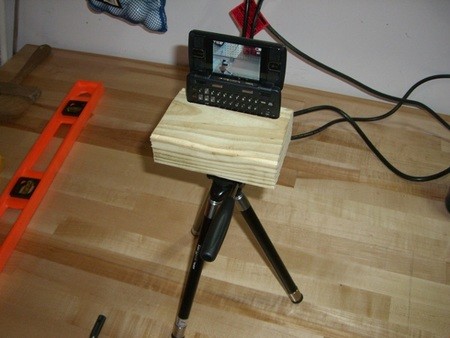 There are better ways to capture video with your phone!

One thing I didn’t pay attention to at first was my video quality. I recorded many of my early clips on an Env2 feature phone (seriously) that wasn’t even very new at the time. If something is truly amazing–think Sasquatch or UFO videos–perhaps content trumps quality, but normally people want to see what is going on clearly. I now use two GoPro cameras for most of my videos and have ample lighting in the area that I film.

Brandt, who has well over 6,000 subscribers on his YouTube channel does note that newer phones are generally capable of HD quality video and tripod mounts for them are cheap. Just because I was using an older model mounted to a block of wood doesn’t mean you can’t get good footage with a more modern device!

Along those lines, don’t neglect audio. Leaving the sounds of your project being made (at a reasonable volume), background music, and even narration by the author can make things much more watchable. YouTube can provide music for your video, but for much more control over how its used, the Free Music Archive is a great resource; just be sure to pay attention to how what you use is licensed.

Producing acceptable quality videos can take a long time to get right. If you’re filming a build process, count on spending more time in production than actually building it. Many of my latest videos start out at over an hour in length, but I try to cut them down, including some fast-forward sequences, to 10 minutes or less.

In Brandt’s case, he lists this as the most important thing he’s learned about making videos. As he puts it, “Don’t be afraid to cut out footage. You may feel attached to the minutes or hours of footage you worked so hard to capture, but if you only need a few seconds to effectively show what was done, cut the rest.” He adds that there are exceptions, but that you can generally cut more than you think. 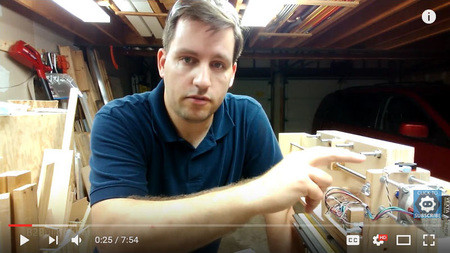 Ben Brandt getting some camera face time with one of his inventions.

This is something that I’m still getting the hang of, but it is said that many people like to subscribe for you more than even the content on your videos. Brandt does this quite a bit more than me, and when I asked him if this was difficult, he notes that:

“Yes, it’s been tough putting myself in my videos. Despite having a personal history in live music and theatre, it still feels funny talking (or just being visible) on camera. Like anything else this gets better with practice. I have to remind myself how much I (as a viewer) enjoy seeing other YouTubers show their personality on videos, and how much I don’t care about somebody else’s physical appearance on video.”

It doesn’t have to be perfect

When I watch my videos now, I sometimes cringe about my imperfect narration, and many times regret that I didn’t get a good angle on one part or another. On the other hand, as I look at my older videos, it’s obvious that I’ve improved dramatically. You won’t be perfect at first, but I’m sure it’s the same with any art form.

Unfortunately you have to put yourself out there in an arena with people that are very very good. There is no “JV YouTube League,” which can be intimidating. On the flip side however, if and when you do come up with an excellent video, there’s nothing holding you back from a huge audience.