True to their word, NXP and Freescale officially finalized a $40 billion merger before the end of 2015, creating the world's fourth-largest non-memory...

True to their word, NXP and Freescale officially finalized a $40 billion merger before the end of 2015, creating the world’s fourth-largest non-memory semiconductor company in the process. There weren’t a ton of surprises to come out of the December 7th press conference announcing the deal’s completion, as we already knew the “New NXP” would be positioned as the number one supplier of automotive processing solutions, silicon-level security, and broad-based MCUs thanks to a now-combined 9,000-plus patents.

As part of what Steve Owen, NXP’s Executive Vice President of Global Sales & Marketing calls “our strategy to develop secure connections for a smarter world,” the new company will focus on connected vehicles, connected solutions for industrial and consumer, and security and privacy. As such, the new NXP will be split into five major business units: Security and Connectivity, Automotive, RF, Standard Products, and Digital Networking. 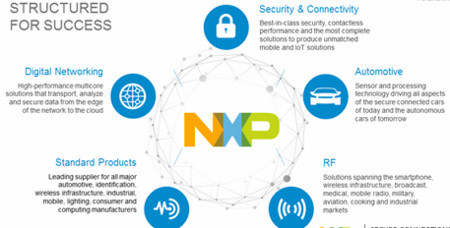 Given the projected success of the combined companies in other areas, the most intriguing of these segments is perhaps Digital Networking, which the company defines as “high-performance multicore solutions that transport, analyze, and secure data from the edge of the network to the cloud.” Led by Freescale’s QorIQ processor family and 5G technology from NXP, the Digital Networking group will be positioned to play a critical role in the company’s end-to-end IoT strategy as they look to provide complete network infrastructure solutions that complement other offerings. However, over the past year the former Freescale group has experienced mixed results, falling from net sales of $281 million in Q3 2014 to $195 million in Q3 2015, although up $11 million from the previous quarter. Now, the hope is that by combining the capabilities of both organizations, the company will be able to stay the course with Digital Networking “because it provides a path into the cloud.”

“The combination of the base station business related to pure telecommunications with the business that NXP has in the mobile space with customers such as Huawei, ZTE, and Ericsson and linking that over time with the work that will need to be done for car-to-X, advanced driver assistance systems (ADAS), and complete infrastructure solutions, NXP’s capability to participate in these larger networks and small area networks and the processing that will be required puts us in a great position,” Owen explained. “Yes, there is investment required in the RF/Power and Digital Networking space … the complete end-to-end system solution is going to be really important.”

It has been stated repeatedly over the course of the merger that the Freescale and NXP portfolios yield minimal product overlap, particularly with the divestiture of NXP’s RF and Power business this summer. Still, with a combined 45,000-plus global employees, many have waited for the “synergy” euphemism once the two companies finally combined.

Speaking from the corporate level on Monday, Jeff Palmer, Vice President of NXP Investor Relations explained that the new NXP will look to eliminate support costs associated with integrating two large, publicly traded companies over the next couple of years, but primarily from the standpoint that “you don’t need two investor relations guys; you don’t need two boards of directors.” On the engineering, R&D, and marketing fronts he continued that layoffs “are not in the area of removing head count from key customer-facing programs or key R&D programs,” before handing it off to Kurt Sievers, Executive Vice President and General Manager of Automotive at NXP to provide more specifics on both staff and locale.

“Automotive is the best example of how complementary the product portfolios from the two groups are,” Sievers said. “From a product technology perspective, there is hardly any overlap between the former Freescale automotive business and the former NXP automotive business. In that respect, on the R&D and marketing side we don’t really see a need to lay off people. Of course we will make sure that we have the best possible team going forward … but from an R&D and go-to-market perspective, there is no need to lay off people.

“We don’t really look at it from a ‘headquarters’ perspective. It is a global business and we’ve got to be where our customers are,” he continued. “So Munich will remain important and Austin will remain important, and the same goes for what comes up in Silicon Valley, we’ll continue to be in Japan, etc., etc.”

If this holds true, it’s great news for the people that make NXP.