Wireless connectivity is a big driver in the world of IoT. Combining wireless protocols with compute power, power management, and sensor technologies...

Wireless connectivity is a big driver in the world of IoT. Combining wireless protocols with compute power, power management, and sensor technologies has opened the door to a wide variety of IoT applications. In this feature, we’ll look at how Redpine Signals leveraged their expertise in wireless technology to create integrated MCUs for the IoT market.

In many ways the Internet of Things (IoT) represents the convergence of the increased usefulness of information from network embedded systems within a variety of industries with the cost economics of the mobile phone industry whose economy of scale drives down costs of components and technologies. The result is IoT: Internet-connected devices collecting information that, when deployed on a large scale, collected, and analyzed, can change the way the world lives, learns, works, andplays.

“When you look at the IoT space, it spans virtually every market in existence – medical, industrial, consumer, automotive, building automation, and smart energy among others,” Mattela says. “All these markets have vastly different characteristics and use cases, but there are a few common underlying themes – compute, power management, and wireless connectivity. That’s why we decided to leverage our core expertise in wireless protocols and integrate this within an MCU architecture.”

Redpine was originally going after the mobile phone market with a convergence IC. They started with wireless, incorporating dual-band 802.11 Wi-Fi with a/b/g/n variants. Bluetooth EDR and LE have also become important wireless device technologies. ZigBee is a third that has been gaining criticalmass.

Mattela views the IoT market as starting in 2008. Redpine recognized they needed an effective low-power CPU core architecture to blend with their wireless capabilities as an IoT System on Chip (SoC). They decided to use the Cortex-M4 for the compute core in order to leverage the right mix of compute performance and power efficiency. The result is called the WiSeMCU (Wireless Secure MCU) product line. The WiSeMCU is based on their own silicon and certified modules. The result is the ability for IoT developers to leverage a mix of modules on a single MCU to put together their device quickly and easily with optimizedcost.

Mattela also mentioned another aspect of the IoT “inch-deep, mile-wide” attribute is there are millions of customers, but each only consumes modules in the 10s, 100s, or 1,000s of units as opposed to consuming millions of specific SoC silicon like the smartphonemarket.

This represents unique challenges to module developers to identify a common-denominator set of capabilities and provide a fixed range of capabilities that address the majority of these customers.

“We have about 4,000 customers today spread across lots of markets and applications versus one or a few customers purchasing millions of devices,” Mattela says. “This is a very big challenge if you don’t understand how to sustain an inch-deep, mile-wide paradigm.”

Redpine has identified three main variants – the RS10001 Wireless MCU single band module with multi-protocol capability and Cortex-M4 processor. The M4 runs at 100 MHz with 512 KB of flash and 104 KB of SRAM. It is also the smallest module of its kind at 8.6 mm x 8.6 mm x 1.7 mm. The part features integrated Wi-Fi, Bluetooth 4.0, andZigBee.

Mattela mentioned that people also wanted a drop-in replacement for their popular RS9113 module. Thus the RS10002 was born – same capabilities and specs as the RS10001, but in a footprint compatible with existing RS9113 connectivitymodules.

For larger IoT applications, the RS10003 provides a 160 MHz Cortex-M4 processor with up to 1 MB of flash and 128 KB of SRAM plus dual-band Wi-Fi, Bluetooth, and ZigBee protocolsupport.

Figure 1 shows the RS10002 block diagram. There are a number of available peripherals for the device that provides a robust set of features for peripherals for a variety of IoT applications. The Cortex-M4 and peripherals combine with the four integrated types of wireless connectivity protocols for a unique one-chip IoT solution that can address inch-deep, mile-widemarkets. 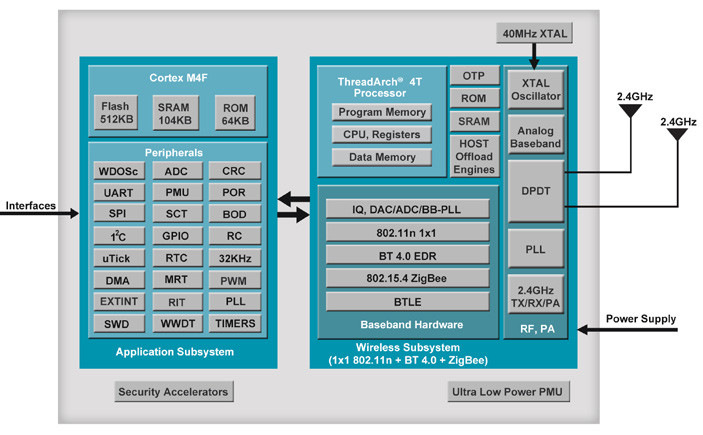 Another interesting feature relevant to IoT is the “Security Accelerator” block. This enables a binding of silicon and software that provides an added measure of protection. Redpine calls this “physically unclonable functions” (PUFs). Every chip has an integrated signature that can be used for software verification to prevent malicious malware updating or illegal software down unlicensedsystems. 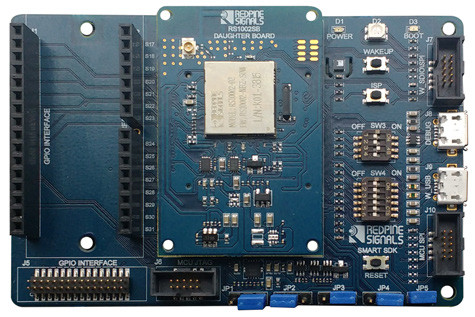 Mattela finished with an illustration of how their WyzBee platform and product synthesis concept is so important.

“Redpine has gone through many projects where customers historically took up to 18 months to develop and integrate, only to give them a 10,000 unit order,” Mattela says.

“We asked ourselves why it was taking so long?”

It turned out to be the product synthesis. When customers were pulling in the Cortex-M4 and sensors, and then had to deal with the wireless on-ramp connectivity to the Internet to get the data to the cloud, it became very time consuming and challenging where some companies had to grow core competencies from scratch. Then when integration issues occurred, there weredelays.

Redpine decided to create the integrated WyzBee IoT Device Maker Platform with a goal of being able to create the prototype with a push-button.

“The WyzBee platform shrinks prototype execution to a couple days as opposed to months,” Mattela says. “Customers can now choose the right products from a library, then push a button and produce the prototype quickly including creating a cloud instance. In addition, the single-source-solution eliminates integration delays. The WiSeMCU is a one-stop-shop for an IoT processor.”