Do you need a fast boot time for your Linux-based system? Of course you do. If you're like me, you wonder why it takes so long for your TV to boot up,...

Do you need a fast boot time for your Linux-based system? Of course you do. If you’re like me, you wonder why it takes so long for your TV to boot up, or the entertainment system in your car. It makes no sense to me, and apparently it made no sense to the folks at Datalight, as they’ve developed a way to eliminate that long cycle, with their NitroBoot product.

I get that people like me want more and more features packed into our devices; guilty as charged. But I want the best of both worlds, tons of features and nearly instant on. And now that’s possible. NitroBoot works with both Linux and Android. Potential applications include automotive, medical, industrial, and consumer. 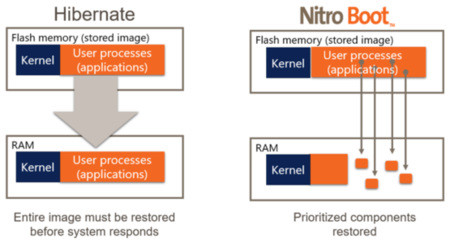 The utility achieves fast boot times by combining hibernation techniques with proprietary technology to ensure that the boot time remains fast even as the memory size grows. Instead of needing to restore the entire image before the system responds, NitroBoot preferentially restores the memory areas necessary for booting the key pieces of the system required to accelerate time to first response to user input. Because NitroBoot doesn’t require standby power like a sleep mode would, devices can cold boot just as quickly and will run longer on limited battery power in the field.

Three different operational modes (dynamic, static mode, and static-plus) let device makers tailor NitroBoot to restore the system to where the user left off or to a pre-determined “factory fresh” state. Other customization capabilities allow it to be used in a secure boot environment.

NitroBoot has been integrated into a bunch if popular of Linux kernels and for a variety of ARM chipsets and development boards. The software development kit allows for easy integration into most embedded environments. Evaluation versions are available for various development boards, including the NXP Sabre SD, the Renesas SalvatoreX, or the Raspberry Pi.