Of the available short-range wireless technologies, Bluetooth and Wi-Fi are the most adopted by medical device developers. This gives them both an opp...

Of the available short-range wireless technologies, Bluetooth and Wi-Fi are the most adopted by medical device developers. This gives them both an opportunity to interact with a large number of existing devices and infrastructure. The table compares wireless use between medical applications and broad industrial use. 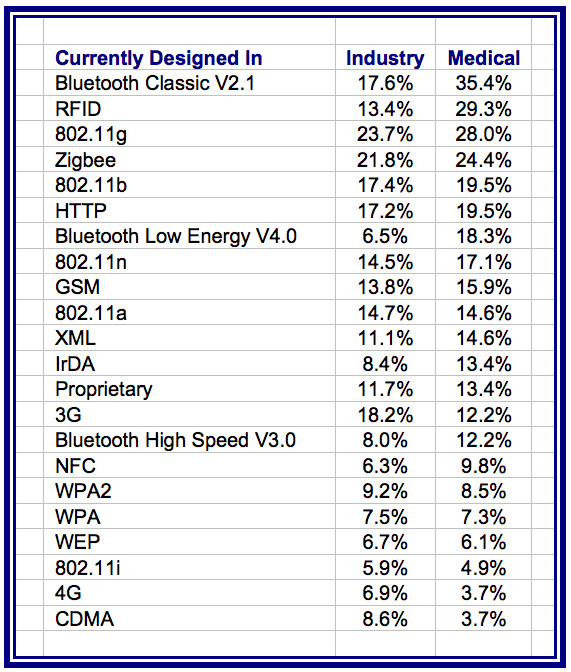 One key requirement of any wireless medium in the medical space is reliability. And some protocol stack software is more robust than others. Clarinox is one partner of many of the RTOS vendors due to its robust and reliable Bluetooth and Wi-Fi stacks. By supporting Clarinox stacks in the specific RTOS, the design experience is enhanced for medical device developers and it’s easier to attain a faster time to market.

Bluetooth capability that’s provided by the module or chip vendor will provide minimal standard functionality. But if you’re looking for faster pairing, maximized performance, faster data rates, and a larger range of applications, then a dedicated stack vendor is typically preferred.

Things that medical device developers need to consider when choosing a wireless technology include:

I believe that Clarinox is one Bluetooth provider that takes steps to enhance the wireless design process (beyond what the chip makers provide). The company recognized that the trend toward greater design complexity was an industry-wide issue. So it decided to produce software systems to alleviate the complexity burden for the embedded software engineer. The result is a suite of protocol stacks, middleware, software debug tools, and an Intelligent Design Environment called Jannal, which lets engineers rapidly develop embedded wireless devices without having to learn the entire underlying system architecture.

The company’s Koala EVM can help a designer get started. Based on an STM32F407, the Koala board has two wireless module interface sockets and provides support for Ethernet, an LCD, a camera, USB OTG, UART/CAN, and built-in JTAG.

Through Jannal, the engineer can access the ClarinoxBlue Bluetooth Classic and Bluetooth Low Energy protocol stacks as well as the Wi-Fi WLAN stack complete with Wi-Fi Direct. The Bluetooth and Wi-Fi stacks run together within the same framework, easing the integration burden when both technologies are included in the same design.

Note: A complete paper, “Wireless Protocols and Driver Interfaces Used by Medical Device Developers and Other Verticals” is available for free download at www.emdeddedforecast.com.

Jerry Krasner, Ph.D., MBA is Vice President of Embedded Market Forecasters and its parent company, American Technology International. A recognized authority with more than 30 years of embedded industry experience, Dr. Krasner has extensive clinical research and medical industrial experience, including the successful filing of over twenty 510k submissions. He earned BSEE and MSEE degrees from Washington University, a Ph.D. in Medical Physiology/Biophysics from Boston University and an MBA from Nichols College. He has been a visiting professor at the Universidad de Las Palmas (Spain) where he was recognized for his work in neurosciences and computer technology.