Wireless charging had been one of those elusive technologies over the past decade alongside the likes of cold fusion and teleportation, but meeting wi...

Wireless charging had been one of those elusive technologies over the past decade alongside the likes of cold fusion and teleportation, but meeting with Semtech at CES 2017, you’d never know it.

Known widely in the embedded space for their work with the LoRa low power, wide area (LPWA) networking technology, Semtech gained proficiency in wireless charging after acquiring Triune Systems in 2015. Initially this translated into delivering wireless charging transmitters and receivers for wearable-class devices, but quickly evolved into solutions for higher power systems in the 20 W range (for some context, wireless wearables charging is typically on the order of

At CES 2017, the company announced that it is continuing its upward mobility in wireless charging with the release of the LinkCharge 40 Series of wireless charging transmitters and receivers that support applications requiring up to 40W power. What’s unique about the devices, however, is that while to achieve 40W wireless charging the LinkCharge devices utilize a proprietary protocol and some firmware tricks, the devices are also backwards compatible with 20W devices by way of support for the standardized Qi protocol. As per Ruwanga Dassanayake, Product Line Manager for Semtech’s Power and High-Reliability Products Group, the LinkCharge 40 devices also up the wireless charging efficiency from “about 87 percent DC-DC efficiency up to the low- to mid-90s. That almost parallels what you get with wired charging.” 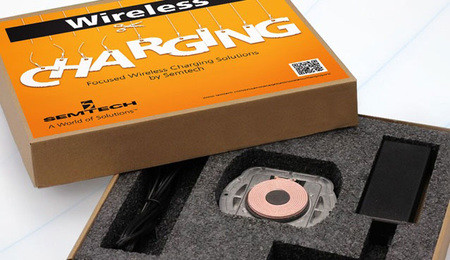 That’s not as extensive as Semtech’s wireless charging solutions get, however, as the company also develops turnkey wireless charging transmitters and receivers for systems comparable to the Roomba (100W to 200W) on the high end, and into th low mA range on the low end for devices such as hearing aids. This inevitably led me to question the limits of the technology for systems such as large as automobiles or as small as simple Internet of Things (IoT) sensor nodes, which Ken Moore, Vice President and General Manager of Semtech and an asset that came over in the Triune acquisition described as solutions that are “still exotic” but that “are possible given the market demand.”

I’ll have to buy an electric car to start moving these initiatives forward, but in the mean time, please forgive the missing picture of Semtech’s demo. I was quick charging my phone.