As it has been for much of the last year, security was well addressed at CES 2017 in everything from consumer wearables to sophisticated automotive de...

As it has been for much of the last year, security was well addressed at CES 2017 in everything from consumer wearables to sophisticated automotive designs. Early in the show I got to see both ends of the security spectrum when visiting the Infineon booth, where Josef Kohn, Marketing and Program Manager for Chip Card and Security at Infineon was running a secure over-the-air (OTA) software update demo for automotive applications.

As most of the electronic control units (ECUs) and software in modern vehicles is safety critical, secure OTA updates have become a requirement for automakers and tier ones looking to make the most out of their connected vehicle designs. A typical OTA update for vehicles includes a cloud backend on one side that initiates a remote firmware send, which is then received by a vehicle’s telematics control unit, passed to an in-car communications gateway, and then distributed to the corresponding ECU running the software that needs to be updated (Figure 1). In this process, however, it is critical to verify that the firmware received by the vehicle is from a verified, authenticated sender. 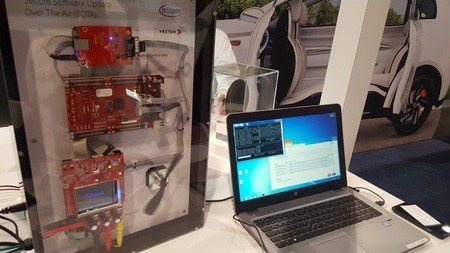 In the demo pictured above, Kohn initiated a remote OTA software update using a cloud-based flash bootloader developed by Vector Software, which was received by the telematics unit. There, the Infineon SLB 9670, a Trusted Computing Group (TCG) Trusted Platform Module (TPM) 2.0-compliant crypto IC verified that the received firmware binaries had been signed with a valid sender certificate using hardware encrypted key storage, then sent the downloaded package through the communications gateway and on to an ECU that controlled a motor, where the download was flashed. In the event that the received package had not been from a valid source, the downloaded firmware would have been disregarded and removed.

This type of security should become standard in connected vehicles, as auto manufacturers look to stay ahead of advanced threats with solutions that are able to protect safety-critical vehicle systems well into the future. “Hackers permanently evolve, which is why it’s important to protect high-value assets from beginning to end.”

On the other end of the spectrum, secure mobile payments have become popular in the consumer world recently through technologies such as Samsung Pay, Apple Pay, and Android Pay. Recently, though, the convenience of paying with a tap has been taken to another level transaction-enabled jewelry. 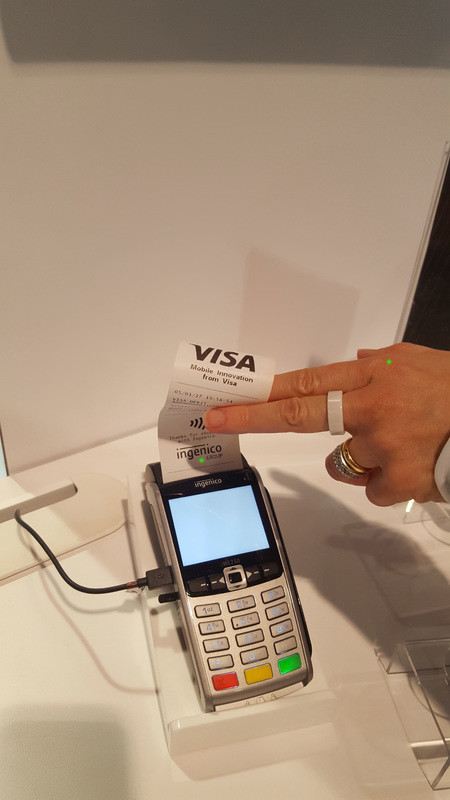 After several highly publicized cyber incidents, some of the biggest culprits identified have been consumer device original equipment manufacturers (OEMs) shipping connected products with few if any provisions for protecting their devices. While some may attribute the lack of security in these devices to cost or time to market, Boiocchi explained that the real reason behind it is a lack of expertise in secure implementations. “Consumer manufacturers don’t want to be in the news,” Boiocchi said. “It’s the complexity [of security] that they don’t understand. It’s not cost, and not so much time to market.”

With highly integrated solutions such as the SLE 77CFLX, Infineon hopes to abstract some of that complexity for wearable and consumer device manufacturers while minimizing the impact on cost and time to profitability.