For two highly cited technologies, Bluetooth and electric vehicles have their obvious shortcomings. The former, while ubiquitous in the consumer elect...

For two highly cited technologies, Bluetooth and electric vehicles have their obvious shortcomings. The former, while ubiquitous in the consumer electronics space, suffers from a lack of bandwidth and range for many applications, such as streaming, and the latter is hampered by a lack of charging infrastructure. However, at CES 2017, Texas Instruments demonstrated solutions for both.

The first came in the form of the CC2640R2F, a wireless microcontroller (MCU) with a feature set headlined by Bluetooth 5 capability, while the second combined two TI solutions that are advancing electric vehicle charging stations.

Adopted by the Bluetooth Special Interest Group (SIG) at the tail end of 2016, Bluetooth 5 technology has sparked a significant amount of interest in the short-range wireless space thanks to its significant performance improvements over previous versions of the technology. According to Bluetooth SIG, Bluetooth 5 is capable of quadrupled range, twice the throughput, and as much as eight times the messaging capacity of its Bluetooth 4-class counterparts. However, as metrics such as these put out by the Bluetooth SIG so often approach the theoretical limits of a technology rather than performance in real-world use, I was somewhat skeptical when approaching the CC2640R2F Bluetooth 5 demonstration being conducted by Jeffrey Stanton, an applications engineering manager in the Bluetooth Smart Group at Texas Instruments.

Before discussing the demo in further detail, it’s important to note that the CC2640R2F MCU is compatible with the Bluetooth 4.2 and 5 specifications, each of which can be operated in Low Energy (LE) mode. Thus, the chip provided a solid baseline for comparing the performance of the new connectivity standard. 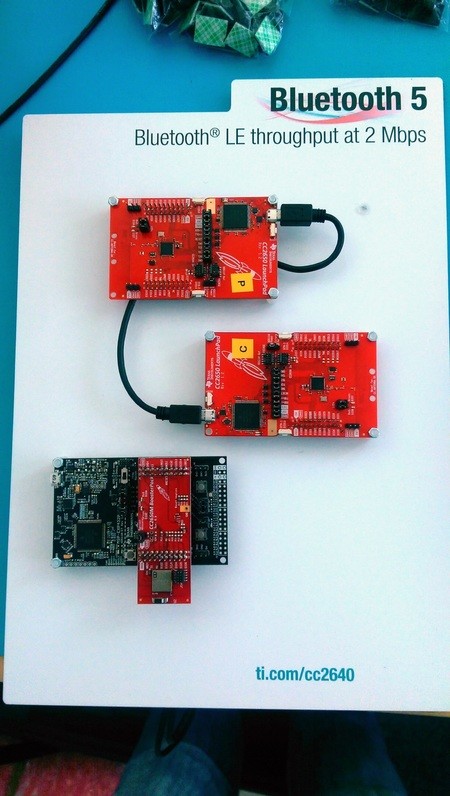 Using Bluetooth perf, a variant of the command line network testing tool iperf used to evaluate the performance of TCP/IP that has been translated for use with Bluetooth devices, Stanton began by transmitting a Bluetooth 4.2 signal, which, in light of all the 2.4 GHz spectrum interference, hovered continuously in the 200 kbps to 300 kbps range. Then, after switching to Bluetooth 5, that number jumped significantly and pushed close to the 2 Mbps barrier (topping out at around 1840 kbps).

Stanton went on to explain that due to the PHY changes in required in Bluetooth 5, there may be a slight lag between the time we see the technology pervade the market as compared with its Bluetooth 4-class counterparts, but that for its part, TI will begin issuing over-the-air (OTA) updates of the Bluetooth 5 protocol stack to compatible devices in the first half of this year, as well as related revisions to the SimpleLink software development kit (SDK). Stanton also mentioned that other TI releases concerning Bluetooth 5 that are on the near horizon, but journalistic integrity requires that I stop here. Needless to say, the throughput and range enhancements of Bluetooth 5 will provide application developers with increasingly pervasive reach, and allow Bluetooth technology to establish a foothold in new areas such as building automation.

Another day and over at the Las Vegas Convention Center, I encountered another set of T.I. engineers working in a very different part of the ecosystem. Just outside of North Hall, Sang Chon, Digital Power Business Manager for C2000 Real-Time Microcontrollers in the Microcontroller Group at Texas Instruments was manning a electric vehicle (EV) charging station equipped with both C2000 and Sitara processors.

According to Chon, a new initiative by the Chinese government seeks to have 4 million EV charging stations installed in the country by 2020, an effort that Texas Instruments is looking to support with an eye towards quick charging based on kW-level DC currents. In the demonstration, Chon was showing how a C2000 MCU was responsible for handling power conversion on the “pump” at 60 kW levels, as well as communications over the CAN bus required for onboard charging in a home setting. 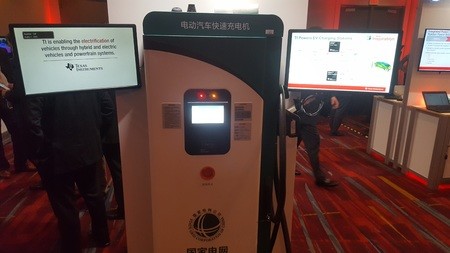 Chon explained that while 60 kW charging stations currently sit near the bleeding edge of EV quick charge technology, plans to bump these systems into the 150 kW and 300 kW range are on the horizon for deployment in environments akin to your typical gas station. The higher ends of the spectrum can significantly reduce wait times at tomorrow’s pump, but also come with challenges related to transient overvoltages or surges between power substations and charging centers. In this regard, the C2000 and its successors will play a significant role in safeguarding electric vehicles moving forward.

Also equipped in the charging station was the Sitara AM335x Cortex-A8 processor, which drove the graphical user interface (GUI) for at-pump payment. Chon revealed that plans are currently in the works to combine or replace the AM335x with the AM437x Cortex-A9 processor in the future in order to support NFC payment on the charging station, as well as provide additional security functionality such as tamper resistance.