AMD sets its sights on everything with the G-Series LX

Back in 2014, I wrote ARM vs x86: Is x86 dead? where naturally my conclusion was a simple and resounding "no." However, I observed ARM gaining such tr...

Back in 2014, I wrote ARM vs x86: Is x86 dead? where naturally my conclusion was a simple and resounding “no.” However, I observed ARM gaining such traction in low-power and mobile devices that I struggled to see a way back for x86 within those applications. 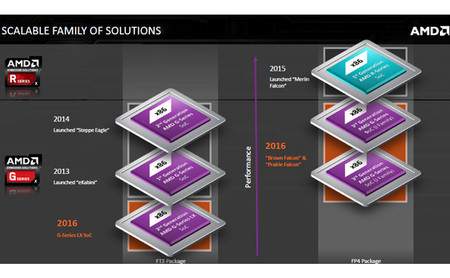 So what’s the primary driver of the G-Series LX? Is it encompassing the IoT revolution? Is it addressing competitive advances, such as the 5-W Intel Atom x5-E8000? Is it AMD’s realisation that it can’t produce the LX800 forever and needs a viable migration path? Or is AMD attacking ARM head-on in (what is now) its heartland? It’s all of the above.

As the saying goes, the risk of being a Jack-of-all-trades is you become a master of none. But AMD genuinely appears to have got it right here, as the company has cunningly appeased the needs of each while still offering something new. AMD is still providing value, at least publically, with the perception of injecting traditionally desktop graphical performance into embedded platforms, which is a true differentiator—despite Intel’s huge advances in its own integrated graphics.

I still remember the announcement of the first G-Series platform, termed “an Atom with octuple the graphical performance.” Though the sands of time have shifted since then, that phrase stuck with me, especially as I think about the new G-Series LX incorporating the AMD Radeon R1E GCU graphics function.

Back in March, I wrote Are graphics finally important in embedded systems? I concluded that they are, now more than ever. The marketing strategy of presenting an embedded platform with a focus on exceptional graphical performance, even from the base dual-core 800-MHz model, yet offering pin-compatible scalability up to a quad core 2.0 GHz, appears wise. Expect excitement from manufacturers of digital signage, thin clients, IP set-top boxes, televisions, and casino gaming, and with visuals gaining increasing importance, industrial control and automation. 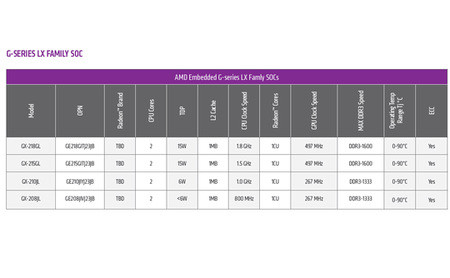 Emerging trends in industrial applications that harness the flexibility of dual-touchscreen displays can be satisfied by the G-Series LX through support of HDMI 2.0, DP 1.2 and eDP 1.4. Interestingly, there’s a fairly equal split between controlling machinery from a discrete location using display duplication verses extending supervisory information away from the point of control.

A second trend the G-Series LX addresses is one I identified last July, that of historically server borne ECC memory finding its way into embedded applications. The IoT revolution demands many things, especially for consumers to trust this connected future. At the top of the list, second perhaps only to security, is reliability. Whilst the G-Series LX may seem overkill for the first wave of basic sensor-derived IoT applications, it won’t be long before I review are graphics finally important in IoT.