A Plea for COMs in Backplane Systems

Modular backplane systems are perfect for building embedded systems based on commercial off the shelf (COTS) available components.

Modular systems such as Compact PCI serial, VPX and VME for the defense, aerospace, and government markets, as well as PXI, AXI and VXI for the test and measurement sector make up approximately one-third of the entire embedded computing board market. Virtually none of these systems use a modular design approach with Computer-on-Modules. A paradigm shift is therefore needed. 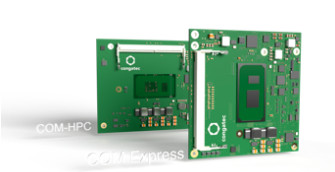 Modular backplane systems are perfect for building embedded systems based on commercial off the shelf (COTS) available components. All those components are standardized, and this not only on the board level but also on the system and rackmount level. This makes it easy to select individual CPU boards, power supplies, extension cards, and chassis in accordance with customers’ needs. And it means a system integrator’s hardware tasks are generally fulfilled quickly and cost efficiently. There is of course a market for customized backplanes, housings, and racks. As a matter of fact, customization on the system level is quite common. But on the board level, backplane system engineers often have to take what is available because custom board-level designs are not economical for small end application lots. Engineers therefore have to live with the consequence that the CPU board is often over-equipped for their applications as custom designs of these complex boards only pay off in larger quantities.

In fact, even the customization of readily available boards is relatively expensive. But between the 100% classical slot SBC and the 100% full custom design approach there is actually a very attractive third customization option at a better price point: The Computer-on-Module approach. Computer-on-Modules deliver the processor performance in a standardized footprint with standardized interfaces for customized carriers. They are application ready, come with a dedicated BSP that integrates all specified drivers, and are available from various vendors. With Computer-on-Modules it is possible to cost efficiently develop a customized carrier in the system’s CPU board form factor. The benefit is that the CPU boards of the backplane systems are better tailored to the needs of the application. The carrier has only the demanded interfaces and the CPU module is perfectly balanced in terms of price and performance. The design becomes less complex, has less layers, and it is consequently less expensive. Moreover, it can also be more compact compared to overequipped COTS variants that are designed to satisfy as many needs as possible. 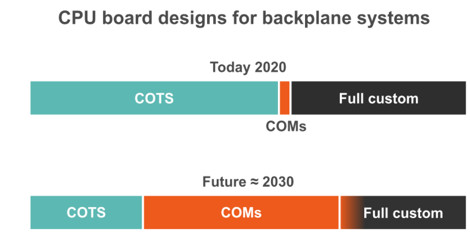 (Caption 1: Computer-on-Modules are poised to conquer substantial market shares of the CPU board market for modular systems.)

Improved scalability for the edge

The same board can also be re-used as it is easy to scale the performance with standard components. For example, to address different needs in edge computing by implementing modules with more cores for more real-time virtual machines. Such multi-tasking edge setups often require no additional physical interfaces. It is only the performance that needs to be scaled to execute additional tasks like data analytics or traffic control. Balancing the performance of the board is also better with modules, as they are usually available with all relevant processors of a generation, while the established CPU board vendors for backplane systems often need to limit their choice of processors.

A further benefit of COM based SBCs is the improved long-term return on investment (ROI): Once a carrier is tailored to the application’s needs, it can be re-used for many years to come as it can scale not only within a certain processor generation but also from one generation to another. It is even possible to switch between processor vendors or architectures. With conventional slot CPU boards, OEMs have to ask the slot board vendor to do a full custom design each time a new processor needs integrating. All these benefits make it really attractive to use Computer-on-Modules and dedicated carriers to tailor the processor performance and computing feature set of backplane systems.

With such a modular approach, even the end users benefit from an improved ROI. When a performance upgrade is needed or a processor becomes obsolete, only the Computer-on-Module needs to be exchanged; everything else can be re-used without any design revision. Designers of edge systems for the carrier-grade communication sector have estimated that upgrading a fog server configuration with Computer-on-Modules will cost only 50% of the initial investment for the first performance generation. It is easy to understand that the wastage rate shrinks even more significantly, as approximately 85% of the entire physical hardware can be re-used. This is a real benefit for companies offering, for example, edge computing or measurement applications ‘as a service’, as the sales of entire systems is not their market anymore. Interestingly, economic and ecological arguments work hand in hand here, rather than conflicting with each other.

So why have we not done such system designs earlier? The reason may be that embedded computing vendors with a broad platform portfolio are not interested in the re-use of module form factors on standard embedded motherboards or SBCs. Often, there are different entities responsible for different form factors, sometimes even competing with each other. But times are changing and system integration vendors such as the UK based company Recab as well as enclosure vendors such as Nvent are now opening up this modular system design opportunity to their OEM customers by adding carrier board designs for slot based systems to their offering. The only thing these vendors don’t do themselves is to design dedicated CPU boards, preferring to collaborate with leading board and module vendors in this area instead.

Offering long-term expertise in the system integration and customization market for backplane systems, these companies are also the right address for getting an answer to the critical question, “Do I need a standard CPU board, a custom variant of this board, or a COM and carrier design for my OEM system?” More and more frequently, the answer is ‘COM and carrier’ as such designs often meet the specific needs of OEM systems better, while also offering far greater sustainability and ROI in the long term.

An attractive starting point for a COM and carrier design for CPU boards of backplane systems is the recent launch of the 11th generation of Intel Core processors (Tiger Lake UP3). Computer-on-Modules that support this new generation are already available in series production from vendors such as congatec. Engineers can thus bring their new PCIe Gen 4 based time-sensitive networking (TSN) capable systems to market faster to gain a competitive advantage as the carrier boards can be equipped with the latest modules immediately. So now’s a good time to ask the global leading module vendors and their partners what they have to offer for the backplane systems sector! 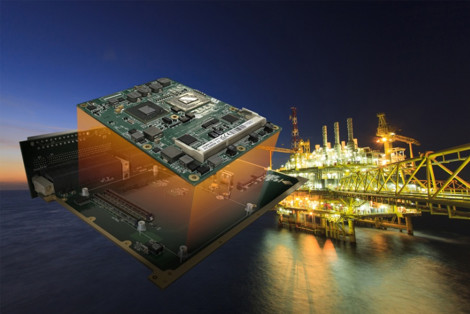 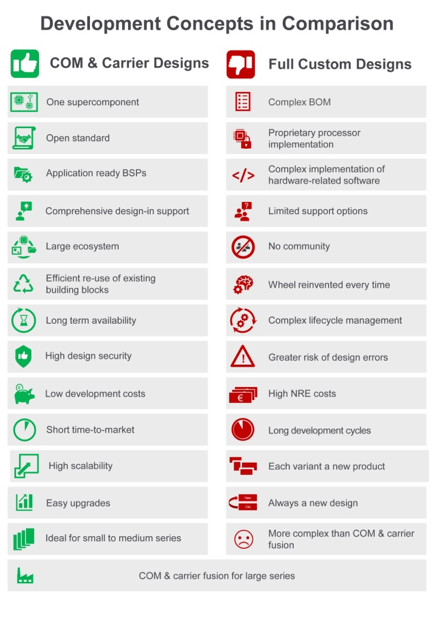 (Caption 4: Full custom design is not as attractive as the COM and carrier approach)