ON Semi buys Fairchild as investment pool dries up

The latest domino to fall in what has become an 18-month-long string of semiconductor acquisitions is Fairchild Semiconductor, which was officially pu...

The latest domino to fall in what has become an 18-month-long string of semiconductor acquisitions is Fairchild Semiconductor, which was officially purchased by ON Semiconductor for $2.4 billion on Monday. The joint company projects annual revenues of approximately $5 billion, making the new ON Semiconductor the second largest player in the discrete power semiconductor market behind Infineon, although with what the company believes is the broadest range of power management ICs available.

From a technology standpoint, the acquisition of Fairchild will help ON Semiconductor bridge a gap in their product portfolio that consists primarily of analog control devices and low-voltage power management solutions by adding mid- and high-voltage offerings. David Somo, Vice President of Corporate Strategy and Marketing at ON Semiconductor says that the mid- and high-voltage power management segments were an area in which ON had already begun calculated R&D investments, and that the Fairchild acquisition complements the company’s strategy as it attacks higher margin business in the key verticals of Automotive, Industrial, and Communications.

During an investor call on Monday, Keith Jackson, President and CEO of ON Semiconductor stated that the aforementioned markets would account for 75 percent of the company’s revenue moving forward. Taking the Automotive segment as an example, Fairchild’s 650 V MOSFETs, 1200 V FETs, super junctions, silicon carbide (SiC) transistors, and other technologies will provide the power density and efficiency required for design wins in systems such as hybrid/electric vehicle (H/EVs) drivetrains and certain advanced driver assistance systems (ADAS) (see Figure 1). For broad-based industrial, Fairchild’s motor power modules will pair with ON Semi’s intelligent power modules (IPMs) and brushless DC motor (BLDC) drivers to strengthen the company in automation, machine vision, robotics, and emerging applications such as drones (Figure 2). The addition of TO-Leadless (TOLL) packaging also provides an attractive option for very high current designs. 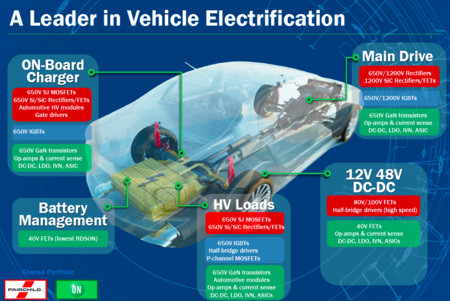 [Figure 1 | Fairchild's mid- and high-voltage power portfolio will enable ON Semiconductor to pursue business in hybrid and electric vehicles (EVs).] 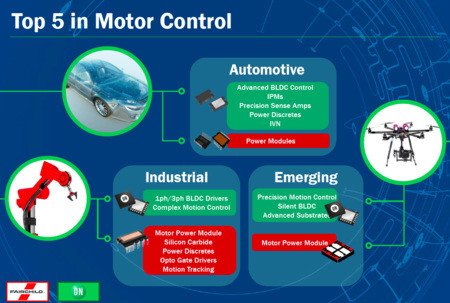 Finally, as part of the acquisition announcement ON Semiconductor revealed that it would be reorganizing into three business units (BUs):

Operations of the Systems Solutions Group will be absorbed by all three BUs, as globally distributed Solutions and Engineering Centers (SECs) and Design Centers pick up the slack.

Semiconductors, scale, and another s-word (synergies)

It’s a matter of fact that the semiconductor market has been down in recent years, and without a strong showing in the second half of 2016 it will again struggle to achieve any growth. In part this is due to stagnation in the consumer computing and communications markets (meaning desktops, laptops, and smartphones), but mostly it can be attributed to the rising cost of creating advanced semiconductors. For example, Ed Sperling of Semiconductor Engineering writes that leading-edge SoCs realistically cost $20-30 million to design and manufacture, while a recent Forbes article states that a modern wafer fab “can cost as much as $10 billion to build and equip.” When talking about discrete ICs, more straightforward designs, and bigger process technologies these figures are inflated to be sure, but considering the expansive portfolios of larger semiconductor companies like ON they are not so outlandish when amortized across hundreds of products.

The only rebuttal to funding R&D for advanced technologies and manufacturing processes is scale. 2015, when the ON Semiconductor/Fairchild acquisition commenced, provided a perfect economic climate to answer the question of scale, as favorable borrowing rates and readily available investment capital made semiconductor M&A ripe for the picking. According to ON Semi’s Somo, however, the $120 billion in M&A activity over the past 18 months has left the well somewhat dry for consolidation to continue at this pace, and uncertainty surrounding the upcoming presidential election has left interest rates up in the air.

Of course, the backside of deals means repayment, and with ON Semiconductor’s net debt in the range of $3.1 billion, the company will look to return profits to its shareholders as quickly as possible through aggressive payments over the next two years. To achieve this, cost savings have been evaluated in terms of synergies across the two organizations and the markets they serve.

“The combination with Fairchild provides enhanced scale and cost benefits. That’s important in a consolidating industry,” Somo says. “While [the semiconductor industry] is fragmented there is still a ways to go until we get to a model that supports continued growth as an industry. While there are growth areas, consumer and computing have been in decline, which has led to consolidation in the industry and in their customers.”

ON Semi expects to outgrow the semiconductor market after acquiring Fairchild, with target gross margins of 40 percent spread across the three application verticals and business units mentioned earlier. To hit these goals less profitable businesses will need to be divested, as evident in the sale of ON’s TVS diodes, automotive ignition, and discrete thyristors lines to Littelfuse.

Further, consolidating the manufacturing operations of ON Semi and Fairchild will help with operational efficiency and costs, as the combined organizations look to improve their factory utilization percentages in the low 80s and low 70s (ON Semi and Fairchild, respectively) to a collective percentile in the mid 80s. Unfortunately, this means cutbacks in manufacturing in the next 18 months, along with the synergies gained from eliminating duplicate corporate functions, such as Sales & Marketing. The company predicts that these savings will generate $225 million annually by 2019.

However, aside from the divestiture of non-strategic assets and reductions in support staff, Somo did make clear that investments in technical personnel will continue. Currently ON Semiconductor maintains about two support positions for every engineer, but under their new organization that ratio will fall (or rise, depending on how you look at it) to 1:1.

That’s good news for many of the people that keep our industry humming.