There are many semiconductor vendors and technologies jockeying for position in the race to process vehicle sensor data.

And there are many others now in the race to process all of that vehicle sensor data. Among them, Toshiba has been evolving its Visconti line of image recognition processors in parallel with increasingly demanding European New Car Assessment Programme (Euro NCAP) requirements.

Starting in 2014, the Euro NCAP began rating vehicles based on active safety technologies such as lane departure warning (LDW), lane keep assist (LKA), and autonomous emergency braking (AEB). These requirements extended to daytime pedestrian AEB and speed assist systems (SAS) in 2016. In 2018 the requirements will expand further to include nighttime pedestrian AEB, as well as day and nighttime cyclist AEB (Figure 1). 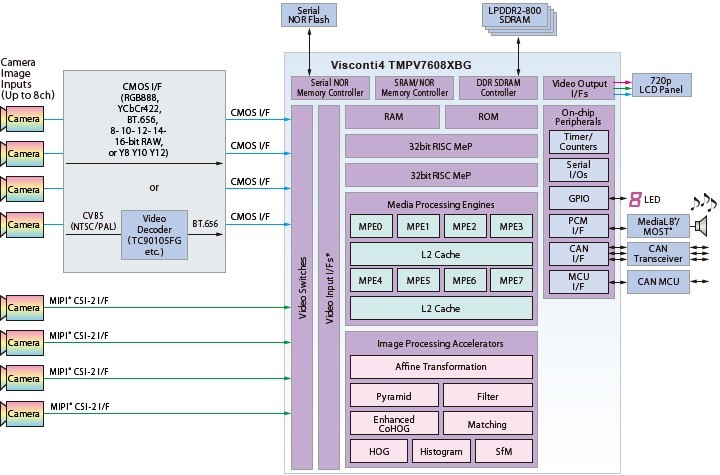 For nighttime ADAS applications, the enhanced CoHOG accelerator goes beyond conventional pattern recognition by combining luminance- and color-based feature descriptors that offset the low contrast between objects and their surroundings. According to Toshiba, Enhanced CoHOG accelerators not only reduce the time required for object recognition, but result in pedestrian detection that’s as reliable at night as it is during the day.

Meanwhile, the SfM accelerator uses sequential images from a monocular camera to develop three-dimensional estimates of the height, width, and distance to an object (Figure 3). Stationary objects can therefore be detected without any learning curve, and motion analysis and pattern recognition can be applied to detect moving objects such as pedestrians or vehicles. Because the three-dimensional information reduces the region of interest within an image, ADAS systems are able to recognize and react to obstacles more quickly. 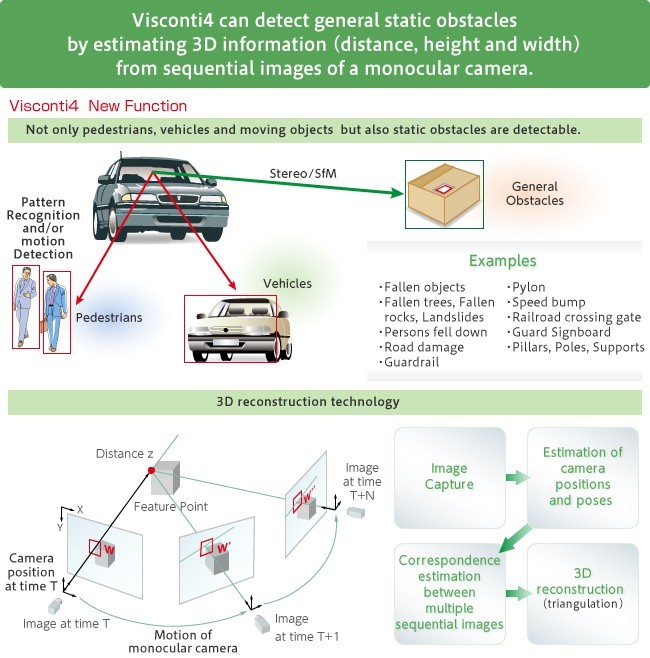 These accelerators operate in conjunction with eight media processing engines (MPEs) in the TMPV7608XBG’s DSP subsystem, each of which are equipped with double-precision floating-point units (FPUs). As a result, the device can simultaneously execute eight image recognition applications in parallel with a response time of 50 milliseconds (Figure 4). Running at clock frequencies of 266.7 MHz, this represents a 50 percent reduction in processing time compared to previous Visconti processors (Figure 5). 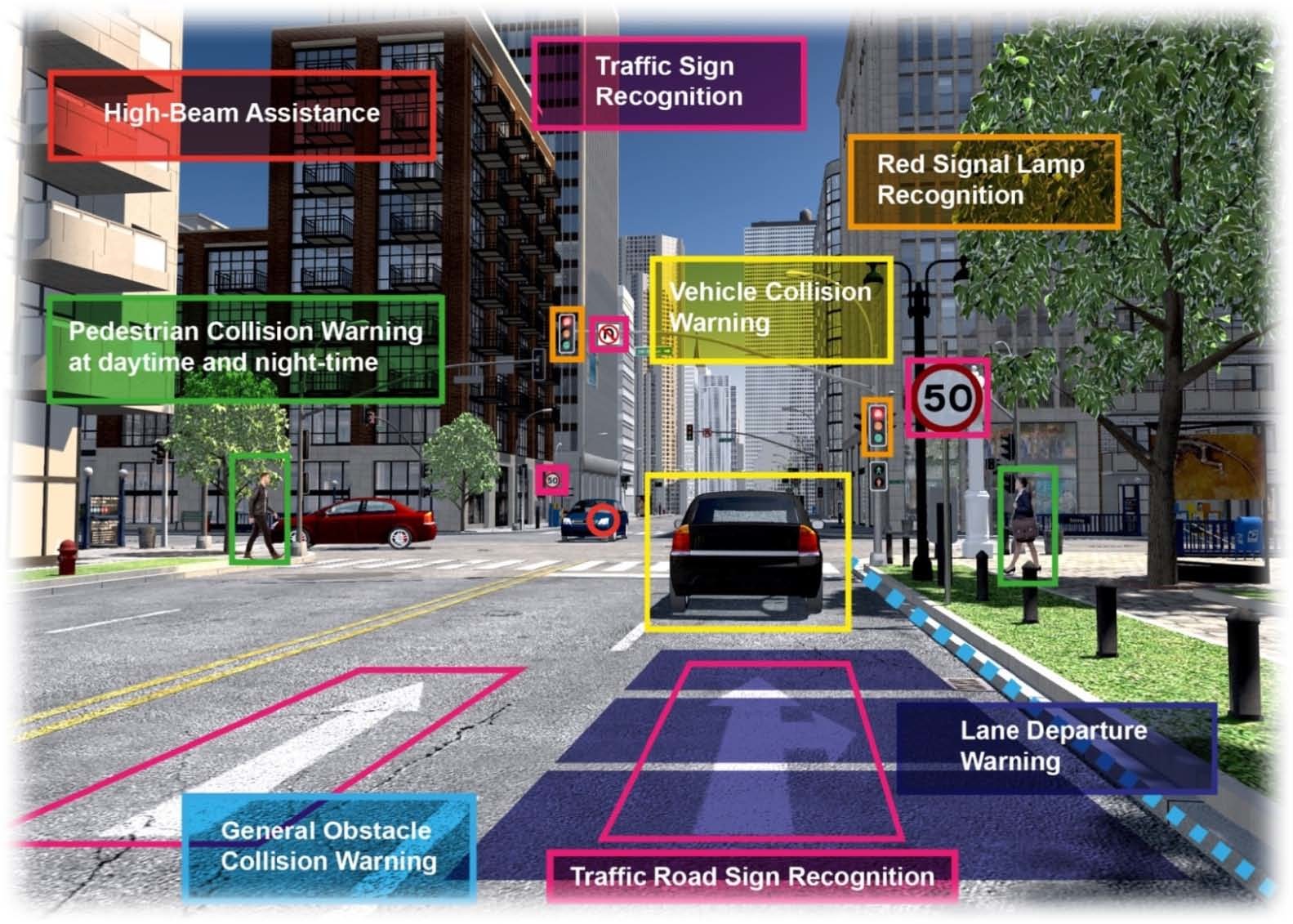 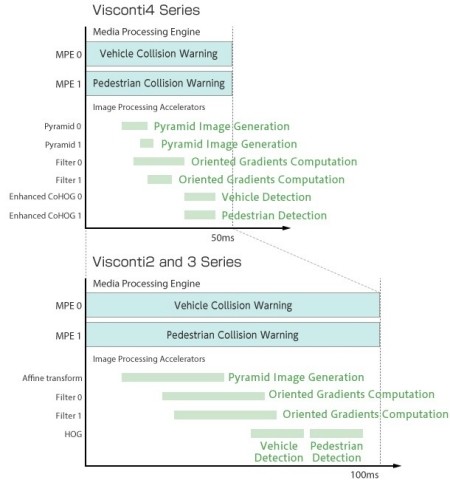 But image processing is just one piece of the puzzle in today’s automotive safety systems. Modern ADAS applications and semi-autonomous vehicles rely on inputs from radar, LiDAR, proximity sensors, GPS, vehicle-to-everything (V2X) connectivity, and other active components, in addition to cameras. Data from all of these inputs must be processed, analyzed, and fused in real-time so that corrective action can be taken quickly in hazardous situations.

Artificial intelligence (AI) would appear the ideal technology to enforce driving policies and make real-time decisions in autonomous and semi-autonomous vehicle use cases. However, conventional cloud-based implementations of AI are unsuitable in automotive safety applications, largely because of the latency associated with data transmission, but also due to privacy, security, cost, and network coverage issues.

As an alternative, supercomputer-class processors capable of running on-chip artificial or deep neural networks (ANNs/DNNs) are being designed into the electronic control units (ECUs) of automotive safety systems in cars like Teslas. For example, NVIDIA claims that variants of its Drive PX Pegasus platform (available in 2H 2018) will provide up to 320 trillion deep learning operations per second (TOPS), which is considered more than sufficient for level 5 autonomous vehicles (Figure 6). 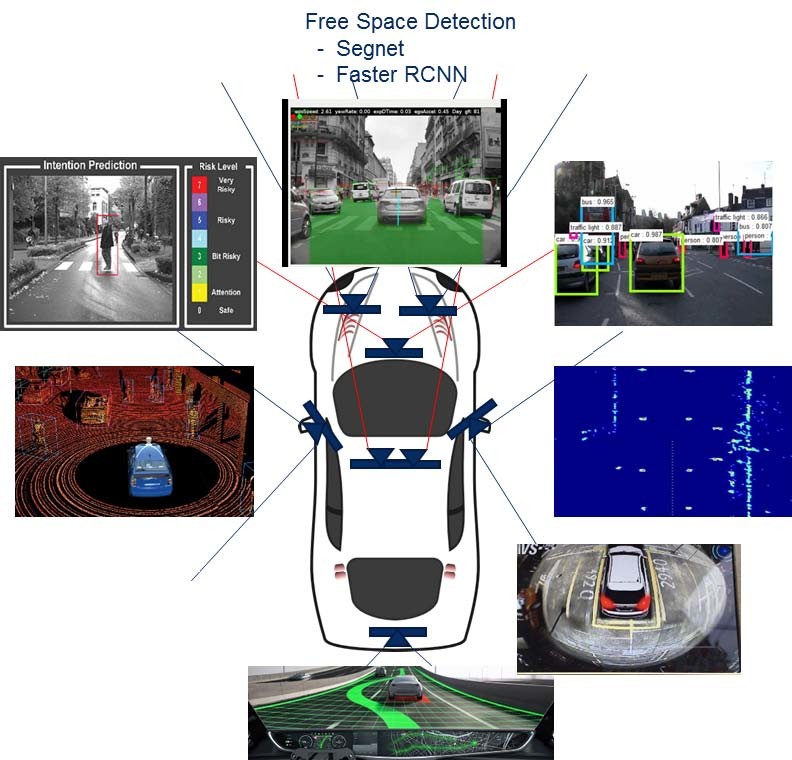 Figure 6. Supercomputer-class processors from companies such as NVIDIA have the processing power to fulfill a range of fully autonomous driving requirements.

Unfortunately, these processors come with challenges of their own. Aside from considerable power consumption and cost per unit, the die size of these chips is enormous (Figure 7). If factoring in one such processor for each of the roughly 100 million cars produced every year, the automotive market would demand three times the silicon currently produced for smartphones. This far outstrips current silicon wafer manufacturing capacity.

Figure 8. The CEVA Deep Neural Network (CDNN) is a toolkit for developing, generating, and deploying neural networks on embedded DSPs.

But what makes the CDNN toolkit unique is the CEVA Network Generator. The Network Generator converts pre-trained neural networks developed in frameworks such as Caffe and TensorFlow into real-time neural network models that can run in embedded systems (Figure 10). From there, the second-generation CDNN Software Framework can be used for application tuning. 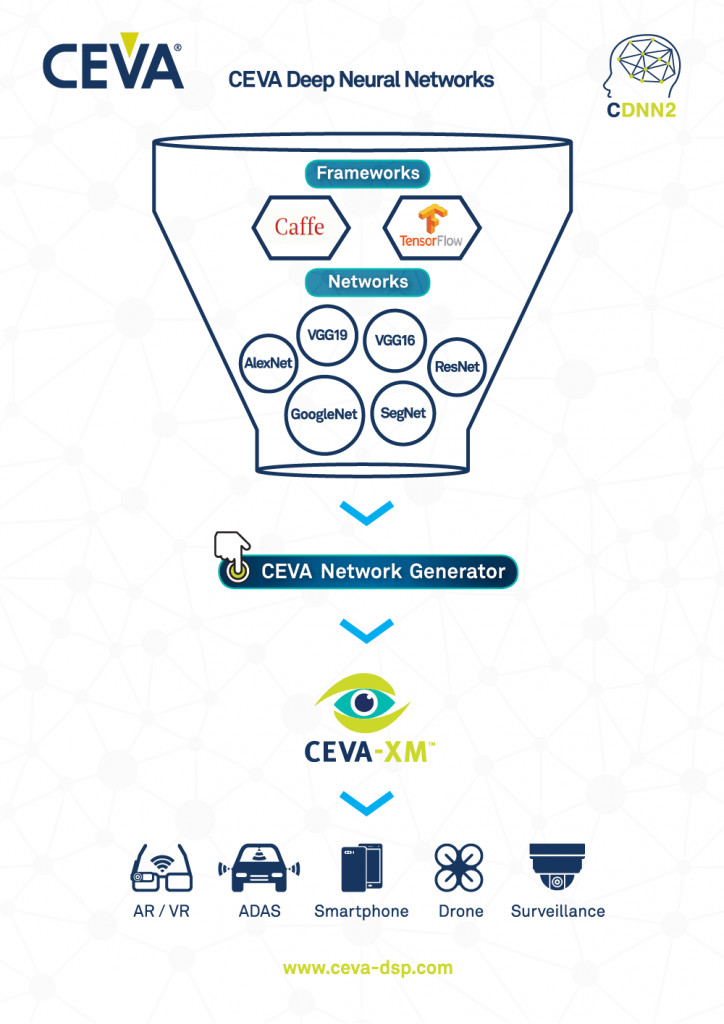 According CEVA, Inc., the CDNN toolkit processes CNNs four times faster than GPU-based alternatives at 25x the power efficiency. Richard Kingston, the company’s Vice President of Market Intelligence, Investor, and Public Relations said that the technology currently has more than five design wins in the automotive space, with notable partners being ON Semiconductor, NEXTCHIP, and a tier one automotive OEM who is using it in a fully autonomous vehicle design.